At the beginning of January, VOX, a Spanish far-right party, issued a statement in which they blamed the current government’s immigration policies for making Spain’s coasts “the principal entrance for illegal immigration in Europe”. The release is chronologically connected to the massive arrival of irregular migrants to the Canary Islands, where the regional authorities were not able to attend them correctly because of resource insufficiency. The claim turns out to be mostly false.

VOX is a Spanish far-right political party founded in 2013 and currently led by Santiago Abascal, a former member of the liberal-conservative People’s Party (Partido Popular). The political formation holds 52 seats in the Spanish lower chamber and has helped elect regional leaders from the People’s Party. Abascal’s party has earned a voice, especially since the last Spanish election in 2019, in which the alt-right movement entered the Spanish parliament for the first time since the democratic transition. The party is a member of the European Conservatives and Reformists, which includes other far-right members such as the Polish Law and Justice, the Bulgarian National Movement and the Italian Brothers of Italy.

A screenshot from VOX’s claim published on its website

VOX is well known for its anti-irregular immigration policies, which include the immediate deportation of all irregular migrants to their country of origin, the expulsion of any immigrant faulty of committing a crime, and the illegalization of non-profit organizations thought to be in collaboration with human trafficking-related “mafias”. This last part includes Open Arms, a non-profit which voluntarily rescues immigrant boats while they are crossing the Mediterranean and brings them back to safe grounds. VOX sued the organization in 2019 for infringement of the Spanish maritime law and collaboration with human trafficking.

The evolution of the Mediterranean migrant situation in Spain

Since 2016, the arrival of irregular migrants in Spain through land and sea has not followed a clear trend. There have been two peaks. The first one, from April 2018 to January 2019, happened during the change of Government in Spain. The People’s Party (PP) lost control of the executive branch in June to a coalition made by PSOE (center-left) and Podemos (left) led by prime minister Pedro Sánchez.

However, the number of migrants entering the country started rising just before that, when PP was still in power. In May 2018, according to the data of the United Nations High Commissioner for Refugees (UNHCR), 3,937 people arrived in Spain, three times more than the same month in the previous year.

After that, from January 2019 to July 2020, the graphic shows similar values to the ones prior to the change of power. In part, that is because Sánchez executive gave €30 million to the Moroccan government in order to help them pay “the costs incurred in their cooperation with Spain and the entire EU on border management and the fight against irregular immigration headed for the Spanish coast”, according to El País, the Spanish newspaper that revealed the information. That amount of money was added to the €140 million that the EU promised Morocco for the same reason.

The second peak started last July and began to go down at the end of 2020. Most of the arrivals were to the Canary Islands, around 20,000. This route had almost been inactive since 2006 when 36,000 people arrived on the islands. Some NGOs, such as the Spanish Commission for the Help of Refugees say that this peak “includes new profiles of people”, mainly because of the “economic consequences of the pandemic” in Morocco and Senegal.

The same data from the UNHCR shows that Spain was the main entry point for irregular migrants in the Mediterranean to European countries in 2020, eight points higher than Italy, the second one. However, as the graphic shows, there is no consistency during the last six years. Greece has led the list twice, in 2015 and 2019. And the same applies to Italy, in 2016 and 2017. The percentages by country vary deeply and, in the case of Spain, they cannot be solely linked to Pedro Sánchez. In fact, almost half of 2018 the country was led by PP and in 2019, when Sánchez was already prime minister for the whole year, Spain just had 26% of the European entries. 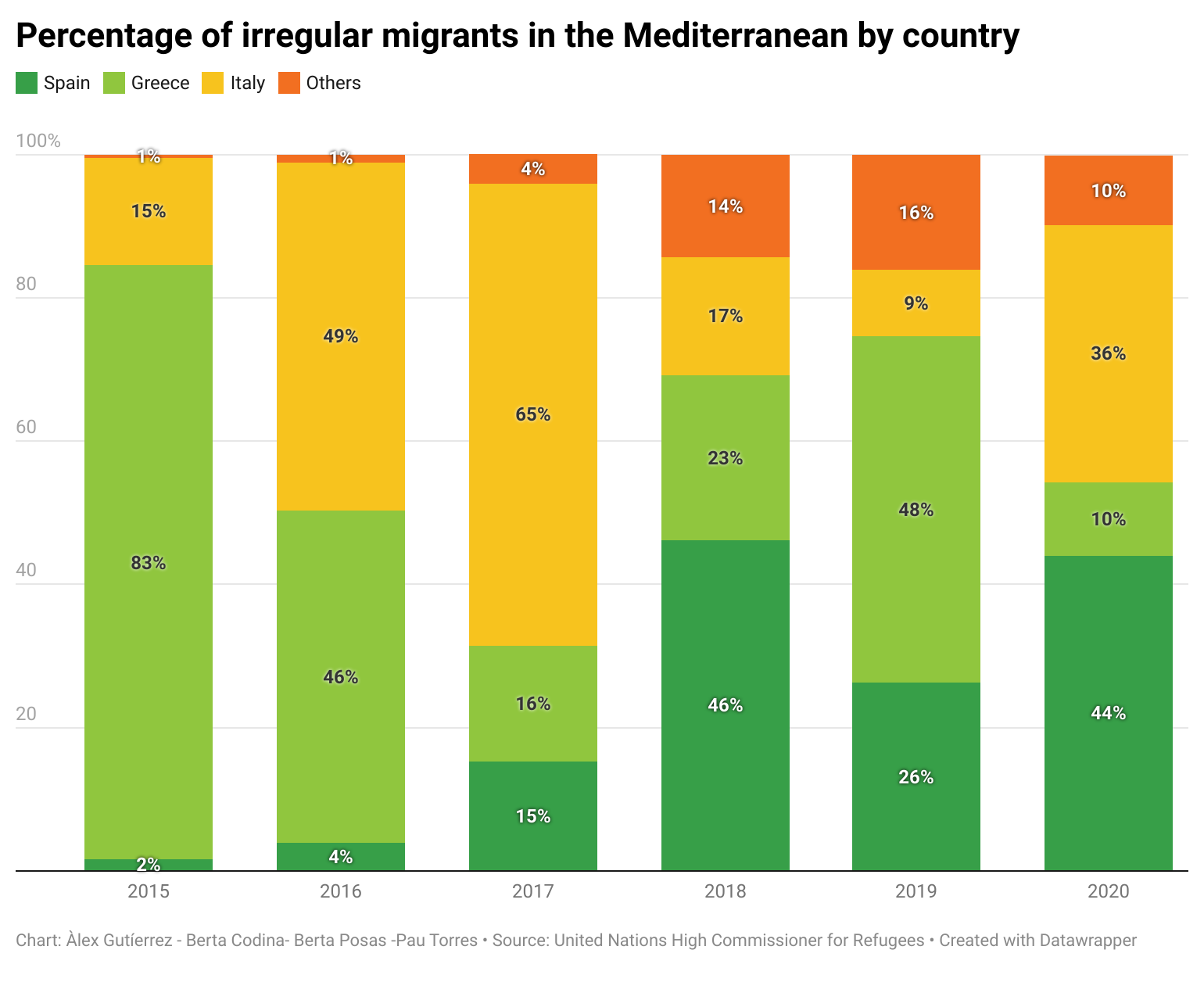 In short, while it is true that Spain was the main entrance of irregular migrants in Europe in 2020 and 2018, this varies greatly each year and there is no clear trend. In 2019, Greece held that position; and in 2017, Italy did. There is also no clear way to link it to the Spanish Government’s actions because this increase started before Pedro Sánchez became prime minister and has fluctuated a lot since he has been in office for a great number of reasons. The Government has publicly shown its willingness to stop irregular migrations and has cooperated with Morocco in that sense. That is why VOX’s statement is mostly false.

Read more about how we analysed VOX’s claims about immigration in our Behind The Facts blogpost.