“A recent job market study shows that about five percent of male Chechen immigrants living in Austria since 2016 have a job” states unzensuriert.at. As claim source the article mentions a study conducted by the Public Employment Service Austria (AMS) – this is false. Moreover, the authors of the actual study do not fully confirm the claim made by unzensuriert. Thus, we rate it as mostly false.

According to  an article published on October 25th, 2020 by unzensuriert.at, an online site with close links to the right-wing populist Freedom Party Austria, the vast majority of Chechen immigrants in Austria do not work. To support their claim the authors quote a study supposingly conducted by the Public Employment Service (AMS) stating that “95 percent of immigrated Chechens live on Austrians”. The statement is supported by a picture of a building with the AMS-logo. 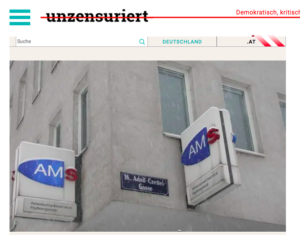 However, the Public Employment Service (AMS) never conducted such a study.

Upon request the AMS pointed out that these numbers have never been collected or published by them. A statistical survey of employment of Chechens immigrants is non-existing due to the fact that employment statistics only capture nationalities. Thus, “Chechens – as a sub-group of Russian nationality – cannot be evaluated“.

In its article unzensuriert.at also links to an article published by the Austrian daily newspaper Kurier. Here it is also stated that “five percent of Chechens living in Austria since 2016 do work”. Kurier, however, refers to a report conducted by the research institute Synthesis Forschung. The study was realized on behalf of the Österreichischen Integrationsfonds (ÖIF), a state fund that focuses on integration.

The research report “Erwerbsverläufe von Migrant/innen II“ (employment history of immigrants) analyses the integration progress of immigrants based on data collected by Austrian social insurance agencies and AMS. Upon written request, one of the authors, Günther Kernbeiß, states „I do NOT agree with the claim made by unzensuriert.at”.

Kernbeiß elaborates that the report refers to the “population group of Chechens“ only as an “approximate approach“ because there is no such thing as a Chechenian citizenship. In 2016, 416 Chechens immigrated to Austria. Three years later, when the report’s data was gathered, only a third (154 people) had their principal residence in Austria.

Researcher Kernbeiß further explains that “out of these people around five percent are integrated into the labor market”. A person is considered ‘integrated’ when he or she had been working for at least 90 days in 2019.

So, although the study shows a number that correlates with the claim made by unzensuriert.at, the interpretation of the claim is not only misleading, but false. Primarily due to the fact that the population group of Chechens cannot be statistically captured.

Upon our request unzensuriert points to the article published by Kurier in which the author confirms that „only 5 percent of Chechens living in Austria since 2016 have a job”. Confronted with our research, the image’s caption was changed and not the AMS but the ÖIF is now cited as the source of their claim.

Author: University of Applied Sciences for Mgmt and Comm Vienna, AT