Nicolas Bay, vice-president of the European Identity and Democracy Group, claimed during the plenary session of 19 January that more than eight out of ten migrants to are adult men. This claim is based on an official Frontex press release and turns out to be true. “Though it’s not the whole picture,” says Ciara Bottomley, press officer for Migration at the European Commission.

Bay’s statement can be easily misunderstood when someone is not aware of the difference between regular and irregular migrants. Also, note that a migrant is different from a refugee or an asylum seeker. In a European context, an irregular migrant is not originally from the European Union and doesn’t meet the requirements to set foot in, remain and live in an EU Member State. A migrant is a person who has had their residence in a country that is not their birth country for more than one year.

A decline in the number of irregular migrants

“The pressure generated by the European migration policy is absolutely unbearable: we must expel all illegal immigrants and close our external borders. Only total firmness will discourage those illegal immigrants who would like to try their luck and will finally allow us to control our migration policy,” said Nicolas Bay during the plenary session. Bay is MEP and a member of the French right-wing party Rassemblement National. According to him, the European migration policy is unbearable and incapable of solving the massive and unmanageable flows at our external borders. But if one looks closely at the statistics of the Frontex press release, the migration picture becomes totally different. 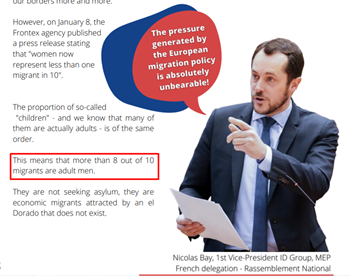 The plenary booklet from I&D bundles their members’ statements.
Screenshot by Jellen Monsieur

In 2020 the number of irregular migrants trying to enter Europe via the outside borders declined compared to previous years. This is in contrast with the image Bay creates. According to the Frontex press release, the main reason for fewer irregular migrants is the pandemic. “It’s noteworthy that it has become more difficult for migrants to reach the EU borders since last year,” says press officer Ciara Bottomley. “This is partially due to COVID-19.” Bottomley also mentions the increase in tension between Turkey and Greece as one reason fewer migrants are reaching the EU external borders.

Statistics do not lie

Nevertheless, Nicolas Bay’s statement and the press release from Frontex talk only about the situation of irregular migrants. If a person is eligible for asylum to enter Europe, he or she will be counted as a regular migrant and will thus not be included in the mentioned Frontex statistics. Ciara Bottomley explained that one of the reasons men are overrepresented is that men tend to try to get asylum first to be later able to let their family come over as regular migrants legally. This is because of the rough conditions when travelling to Europe. If you look at the overall picture and study the statistics of the European Union of the people who are granted asylum, the ratio is not the same as mentioned in Bay’s statement. The share of women and children is much larger than two out of ten and differs in each Member State.

We contacted Nicolas Bay, but he did not respond to our request to elaborate on his statement.