Mostly true: “Twice as many men die from coronavirus than women”

In a headline on April 5, 2020, the Copenhagen Post, an English-language publication in Denmark, wrote that “Twice as many men dead from coronavirus as women.” In the article itself, the publication sources the claim from a report released by Statens Serum Institut, an official institution operated under the Danish Ministry of Health that aims to ensure preparedness against infectious diseases. Yet, after thoroughly perusing the organization’s research reports on its official website, it is evident that there is no mention of this study at all. It seems this report doesn’t even exist. The Post didn’t provide any further context or sources, nor did they offer any further evidence to substantiate the data. The article was merely a bold claim with no further explanation. So, if this official report doesn’t exist at all, then is this claim entirely baseless?

It turns out, the claim is not entirely unfounded. And the Copenhagen Post was not the only news outlet reporting on this aspect of the virus. On the other side of the Atlantic, the New York Times reported a similar phenomenon from New York City. As data from the city’s health department data showed, using the most recent figures from April 20, the Covid-19 death rate per 1000,000 people was 1,736.43 men and just 80.06 women.

There’s a similar trend in Europe too. Global Health 50/50, an independent initiative working to advance action for gender equality in global health has collaborated with CNN to collect data from countries that are recording Covid-19 deaths by sex. The figures are continuously being compiled from various ministries of health or health officials, or requested from press offices of different national ministries. Their Covid-19 sex-disaggregated data tracker is then updated based on the most recent numbers, usually every Wednesday. Their most recent update from April 22 showed that 60 per cent of deaths in Spain were male. This figure was 65 per cent in Italy.

In Denmark, the tracker most recently showed that 59 per cent of the 370 reported deaths were male. And while the official Statens Serum Institut report that the Copenhagen Post referred to is not available on the institution’s official English website, their Covid-19 monitoring report was actually available on Global Health 50/50’s website.

Overall, according to the World Health Organization’s (WHO) European regional office—that publishes weekly surveillance reports, the most recently published being from the week of April 13 to 19—63 per cent of all reported deaths in Europe were male. 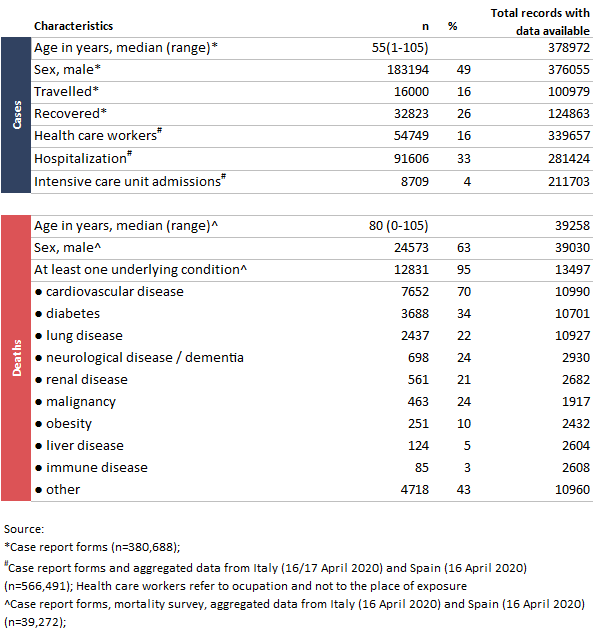 This trend is consistent throughout the countries that have recorded the number of Covid-19-related deaths by sex. Some have suggested that behavioural differences among men and women may be a factor—for example, men are more likely to smoke, a 2015 analysis from the National Center for Biotechnology Information showed, potentially causing a higher number of underlying lung conditions.

But it may also come down to biological differences. “Women live longer than men, and they tend to develop hypertension and heart disease — both of which increase the risk of severe disease with Covid-19 — at later ages than men,” Kathryn Sandberg, the director of the Center for the Study of Sex differences in Heath, told the New York Times. “The X chromosome — women have two, of course, and men only one — and the female hormone estrogen are believed to play a role in immunity.” Sandberg also said that women tend to have more robust immune systems than men, which may increase their capacity to weather the virus.

The Copenhagen Post’s headline claiming that twice as many men have died from Covid-19 bears some element of truth. Yet claiming that “twice as many men” is misleading—and an overgeneralization of the figures. While the ratio in Denmark is nearly two to one, the Post’s precise statement is inaccurate without context, because they don’t specify that they’re only referring to Danish figures in their claim. Many other countries do show such a big difference.
It is true, however, that men are more likely to be more severely affected by Covid-19 than women. But it’s also difficult to trust the exact figures. Data can differ based on the extent of testing, which varies from country to country, and how many deaths are reported. Yet overall, in evaluating the available data from countries that have been recording deaths by sex, there is a consistent trend that men tend to be more harshly affected by the disease and represent a larger number of deaths.

*Due to the small number of cases among transgender and gender-nonconforming people, data on those cases were not included on statistics sites.

Disclaimer: recent data can be found on: GlobalHealth5050 and show the same patterns as reported on by media worldwide, in April 2020 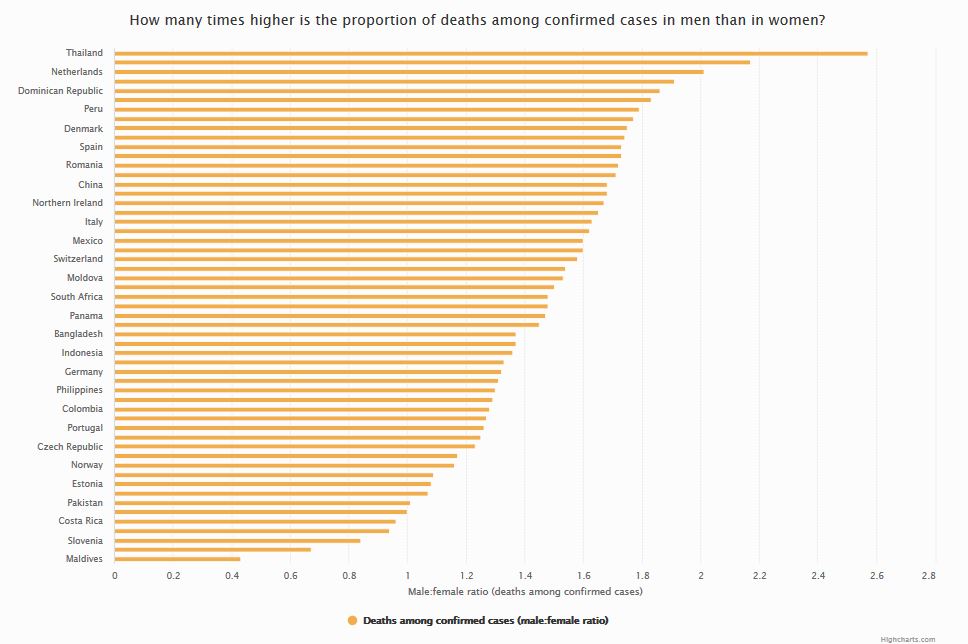