Mostly true: Wages grew more than prices in countries that introduced the euro

On December 10th 2021, Boris Vujčić stated in a press conference that people should not fear higher prices after the introduction of the Euro in Croatia. He claims that in recent years wages grew more than prices in the countries that introduced the euro. Our investigation concludes that this claim is mostly true.

In 2023 Croatia will give up its national currency, the kuna, and introduce the euro. It is the twentieth country that joins the Eurozone. According to Eurobarometer polls, there is a stable majority of 55% of Croatia’s public in favor of introducing the euro. The tourism sector in particular seems highly in favor of the common currency and expects reduced changeover costs for people visiting Croatia.

On the other hand, the same poll shows that 49% of Croatians fear that the euro will have negative consequences for their country and a total of 81% worry that the introduction of the euro will lead to higher prices. Boris Vujčić, Governor of the Croatian National Bank, said in a press conference that “people should not be afraid, because wages grew more than prices in the countries that introduced the euro”.

To check this statement, we had a look at the average monthly gross wages and the harmonized index of consumer prices (HICP) on an annual basis in six different countries that joined the Euro between 2007 and 2015, and are commonly compared to Croatia.

The European Central Bank, the source of the data for the HICP, describes this variable as a measure for “the change over time in the prices of consumer goods and services purchased by Euro area households”. Due to the same measurement method, it is possible to compare data from different countries.

It is important to note that external factors like the financial crisis in 2008 or other circumstances like inflation, pandemic and wars affect the changes in pricing and wages. It is difficult to differ how big of an impact they have on the numbers presented here. But by looking at the average monthly gross wages and the harmonized index of consumer prices, a general trend can be discerned if the wage growth was higher than the price growth in those six countries.

Countries whose data were analyzed for this research are Slovenia, Slovakia, Estonia, Lithuania, Latvia and Cyprus. The following graph shows the wage growth compared to price growth, starting with the year the euro was introduced in each country, and ending six years after its introduction. 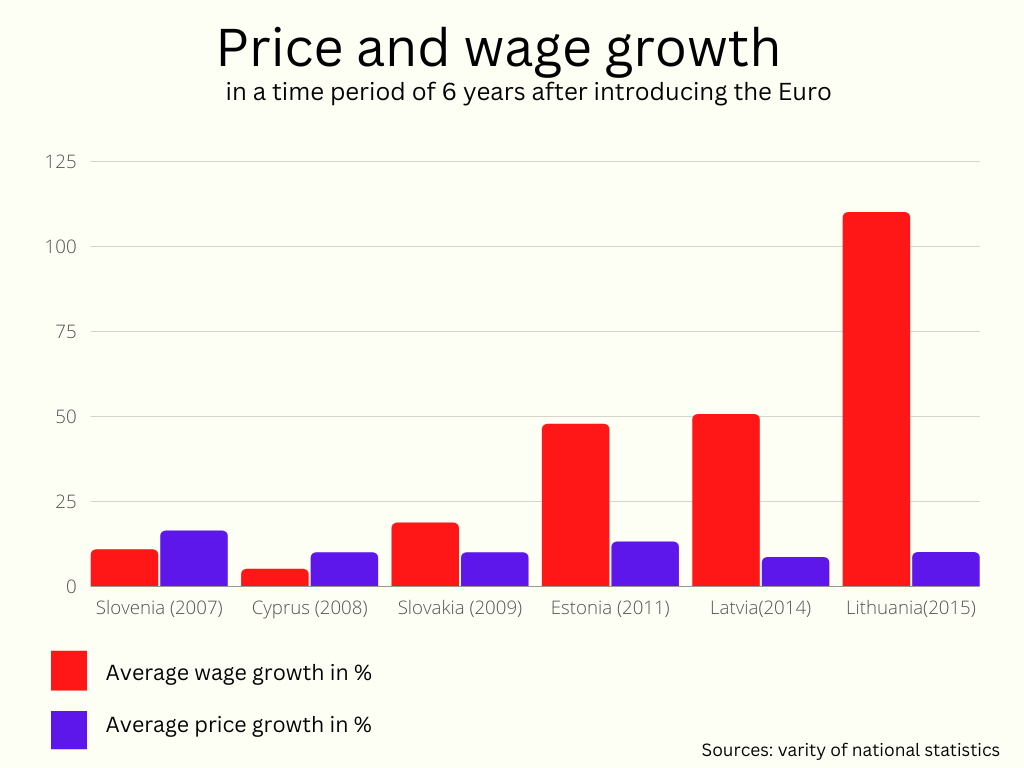 Slovenia introduced the Euro in 2007. Shortly after the introduction of the Euro, the average monthly gross wage was around 1,391.00 Euro. In the year when the euro was introduced, the average HICP was 86,42.

In comparison, six years before the introduction of the Euro, the average monthly wage was around 983.00 euro, while the average index of consumer prices was 67,33. Percentage-wise this means that between those six years wages experienced a growth of 41%, and prices have increased by 28%.

In 2014, six years after the Euro was introduced in Slovenia, average monthly wages were still rising but not as much as in the six-year period before the introduction of the Euro. The average wages were around 1.540.00 Euros, which means a growth of 10,7% took place compared to 2007/2008. Looking at the index of consumer prices, in the same period it grew by 16%, by reaching a number of 100,40.

Besides Slovenia and Slovakia, all of the countries that we looked at, experienced a growth in wages over the six years after the introduction of the euro. Lithuania had the largest growth with 110% and Cyprus the smallest with 5%. The consumer price index also grew in each of these countries. Slovenia had the largest growth with 16,18%, and Latvia was the one with smallest growth – 8,85%. But in order to fact-check Vujčić’s statement, it is necessary to compare the wage growth to the price growth.

Comparison of six countries in the Eurozone

It is important to note that these changes happened in different time periods, which is why it wouldn’t be entirely correct to compare these countries’ growth in wages and prices. As mentioned before, there are many factors that affect these numbers. Slovakia, for example, joined the Euro area in 2009 when the global crisis was at its worst.

But if we take the period of another six years that followed, it shows that these two countries experienced the same trend as four others. In Slovenia, from 2013 to 2019, the wage growth was 4,3 times higher than the price growth. The same thing can be assumed for Cyprus. It takes these two countries more time, but a trend towards higher wages than prices is given.

What is behind the numbers

Mr Kristijan Kotarski, professor at the Faculty of Political Sciences of the University of Zagreb, explains why wages grew more than prices. “In all countries that introduced the euro after the official introduction of the euro in 2002, for the initial 12 members, wages grew faster than inflation due to rapid economic convergence.”

“Economic convergence or the reduction of the development gap between less and more developed parts of the monetary union is the result of deepening financial and trade integration”, says Kotarski. He adds that “a large influx of foreign direct investments, portfolio investments and transfers from EU funds, as well as the inclusion of the respective countries in regional supply chains through growing exports, contributed to a significant jump in productivity.”

“Productivity growth is the only sustainable and long-term guarantor of wage growth and living standards. The euro is not the cause of the rise in living standards, but it is a factor that facilitates cross-border trade and investments, and reduces transaction costs”, concludes the professor. 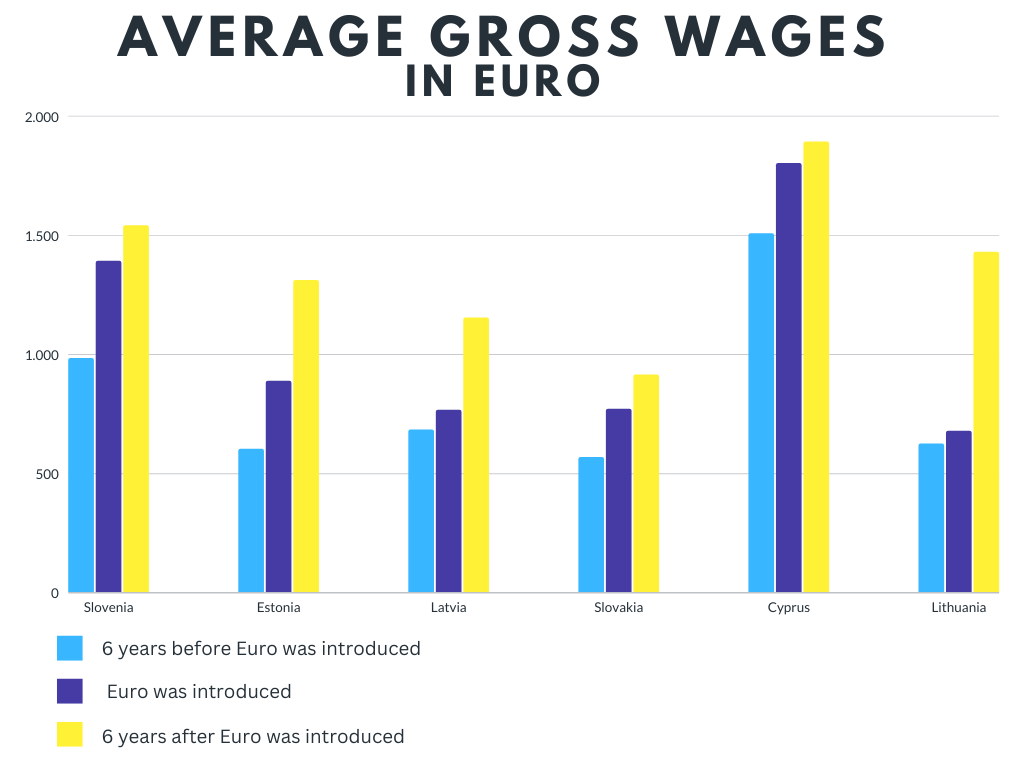 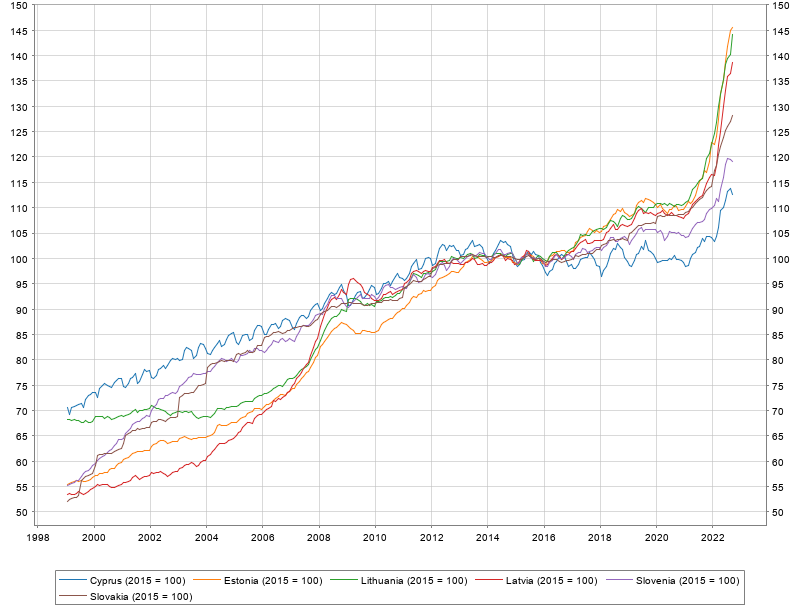 Kotarski also explains whether the trend of higher wage growth than price growth will also happen in Croatia, as suggested by Vujčić: “Croatia will succeed in repeating the path of Slovenia, Slovakia and the Baltic states if it works to improve the business climate and the overall economic structure. The euro will be beneficial to Croatia, but it will not ensure an effective and independent judiciary, a sustainable and high-quality pension and healthcare system, lower taxes and less corruption as prerequisites for faster development.”

He adds that “at this time of high inflation, many will try to connect price increases with the introduction of the euro, but this kind of inflation is primarily the result of disturbances in the energy market. The only sustainable path to reducing inflation and increasing the real purchasing power of wages lies in the long-term increase in energy production from renewable sources, as well as the return of nuclear energy to the big door, and smart investments in the technologies of the future.”

To conclude, Vujčić’s statement about wage growth being larger than the price growth is mostly true for the countries analyzed here. In most of them, that happened in the six years after the euro was adopted. But in Slovenia and Cyprus, it was the opposite: in the six-year period after the introduction of the euro, price growth was larger than wage growth. However, if a longer period of time is chosen for analysis, these two countries eventually follow the same trend as the other four.

Leave our comments, thoughts and suggestions in the box below. Take note: your respons is moderated.