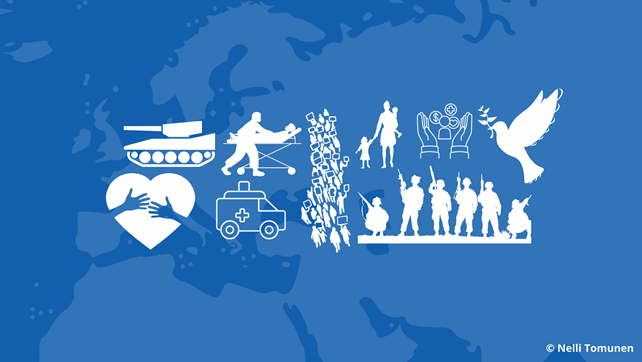 In our media analysis, we compare news about Ukrainian war refugees to the news about the refugee crisis in 2015. All news were published by Finnish public media broadcasting company Yle. We wanted to see if there is a difference in how media writes about people fleeing from Ukraine and refugees in 2015. We found that some themes, for example xenophobia, could be found in news texts of 2015 but not 2022.

From our data we drew seven themes, that we thought defined and comprised the news articles. We collected lists of word choices used in the articles, that were then comprised into the seven themes.

The themes are safety, war, xenophobia, bureaucracy, aiding, distress and politician´s comment. One news article may have more than one theme.

Themes from aiding to distress

In 2015 the word choices like “distress”, “a drowned child” and “preserving of the reception centre” were used. In 2022 expressions like “Ukrainian children’s blood”, “nuclear war” and “traumatized” were used.

In 2022 different aid organizations were mentioned in the news articles thirteen times, and only four times during 2015. The common thing with aiding as the theme among both periods was, that concrete aiding was highlighted, expressions like “need for help”, “donation” and “working together” were used.

According to our data, in 2015 the news articles were more about government aiding and in 2022 more about private involvement or voluntary aiding. The voluntary aiding for the refugees during 2022 was an important theme, and it was detected ten times. For example the articles mentioned Finns traveling to the boarders of Poland and Ukraine to voluntarily aid the people fleeing the war. Voluntary aiding as a theme was detected only two times during 2015. We think this might reflect some changes in societal attitudes in Finland.

Bureaucracy, safety, and war as themes

A theme we call ”bureaucracy” was detected in 2015 news articles 14 times. For example, “reluctant”, “burden sharing” and “problem” are some of the word choices, which were used. In 2022’s articles bureaucracy was a theme 24 times. There could be seen a change in tone in 2022’s word choices. For example, “aiding”, “the government will assist” and “prepare” were used.

In 2015 safety was a theme 11 times, versus 6 times in 2022. What we think is significant here is the fact that although there were sixty news articles in this analysis, safety as a theme is not as present at all.

Expressions like “uncontrolled immigration”, “crossed the border” and “full capacity” were used in 2015. In 2022 expressions like “fighting in the war”, “the situation was prepared for” and “responded to in crisis preparedness” were used.

War as the theme was not found once during 2015, and in 2022 it was found three times. Word choices reflected compassion, and “forced to act”, “horrible” and “ask for help” were used.

Xenophobia as a theme we found two times during 2015 and none during 2022. Expressions like “the eye accustomed to”, “there’s limits to everything” and “spaces elsewhere” were used, and we interpret these choises to reflect the social attitudes.

It is noteworthy that the word choices were not directly xenophobic. Nevertheless, we found xenophobia to be one theme in the articles according to the context. In these cases the news articles were about either the racist impacts or phenomenons due to xenophobia.

In 2015’s news articles Yle interviewed politicians 10 times about their stance towards the refugees and the refugee-crisis. In 2022 Yle did not interview any high-profile politicians in the news articles. Although it is significant to note that the timeline of 2022 was only one week.

From polarization into consensus

According to our news articles during 2015 Finnish society seems polarized. Finland’s responsibility to aiding during 2022 and aiding in general emerged in the themes and word choices in the news articles of Yle.

We found based on our research that as xenophobia could be found a s a theme in 2015, the 2022’s news articles were displaying more a consensus of voluntary aiding.

We conclude, that based on this data, we can distinguish a change in the way Yle writes about refugees in 2015 and in 2022.

Media analysis: Brexit aftermath through the lens of leading newspapers in Spain, France and the United Kingdom
May 4, 2021
Search
Other fact checks
Recent Comments
Archives
Categories
Go to Top