Uncheckable: Does Article 13 open the door to censorship?

Article 13 of the new European copyright law anticipates a lot of resistance. The law wants to ensure that content creators are better protected. On March 26, a Flemish member of the European Parliament Anneleen Van Bossuyt (N-VA) voted against the European reformation of copyright law. In an article that appeared on the website of Flanders’ public broadcasting service VRT News, Van Bossuyt says it is unfortunate that Europe will now increase the monitoring on what appears on Google and Facebook: “The obligatory filter system is a modern version of a censorship machine. From now on we will not get to see a lot of videos because the filters are not capable to differentiate the exceptions on copyright laws such as parodies, they will not recognize it and therefore out of precaution will hold them back.” But is this statement true? Does Article 13 open the door to censorship. After research it appears that this claim is uncheckable.

The European Parliament approved the controversial ‘Article 13’ on March 26. This article states that platforms like YouTube and Facebook should be held responsible for the copyright content of their users. This might result in platforms having to delete content, if there is no agreement between the creator and the platform. Besides that, platforms are obliged to incorporate automatic filters to make sure that users cannot download the copyrighted content.

A number of experts confirm the statement of Anneleen Van Bossuyt (N-VA). At the time being, there is a so called ‘value gap’ in which the authors don’t generate their earnings, while platforms benefit from enormous amounts of ad revenue. Article 13 is supposed to be the solution for this problem. Marie-Christine Janssens, professor of copyright law at KU Leuven, says that the platforms will be held fully accountable for violation. “The platforms are going to be very concerned about their liability and will probably block content. It is something that has been going on for a while already, but now we fear they might block too much. The consequence of this ‘overblocking’ would be that content, such as parodies or content that has been quoted, would be affected.

Also Matthias Dobbelaere-Welvaert, lecturer ‘Copyright and Media Rights’ at the Erasmus University of Brussels, confirms the possible side effect of Article 13 as a censorship machine. “The new legislation might not be a good measure for you and me,” writes Dobbelaere-Welvaert in an opinion piece. “Article 13 will also hamper technological innovation within the European Union,” says Dobbelaere-Welvaert. “Companies will choke on EU legislation, while their cousins in the US or China can do as they please.” Dobbelaere-Welvaert also sees some practical problems. He predicts that websites will create their own upload filters. In that way, a new kind of public debate will develop on social media. Moreover, discussions will be based on rumors with no background information and no longer based on reputable new sources. 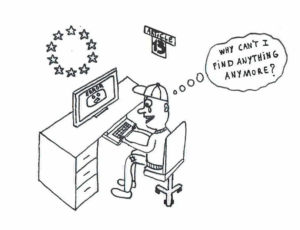 The Belgian consumer organization Test Aankoop calls Article 13 “a major obstacle to the freedom of creation, for the transfer of knowledge and in that way also for freedom of expression in general”. But at the same time Test Aankoop supports the purpose to reform the copyright. According to Test Aankoop recent examples have shown that the use of those automatic filters by platforms like YouTube and Facebook, are not smart enough to distinguish content that infringes copyright and legal content.

However, there are experts who contradict the statement. Bart Staes, member of the European Parliament who represents Groen (Flemish political party) opts for the creative ability, “although the proposal still contains defects”.

Hilde Vautmans, member of the European Parliament who represents Open Vld (another Flemish political party), sees no censorship and no restriction of freedom of expression for ordinary users. “Thanks to the rules we have approved, we’re able to end the Wild West for big internet platforms. There main goal is/was to make profit out of large available amounts of copyright material”, says Vautmans.

The opponents of Article 13 say that it is indeed a censorship machine that is going to limit creativity because of the upload filters. The proponents on the other hand, want to end large corporations who unfairly make a lot of money with ad sales. Also, those proponents want to protect the artists by giving them what they’re entitled to. As you can see, there are various views, but both sides agree that this copyright law should be reconsidered carefully. Therefore, this claim is uncheckable.