In a tweet dated April 2, Gilbert Collard published a post about the rumour of a French decree, that would authorize euthanasia during the coronavirus period. And to back up his words, he quoted an interview with surgeon Joseph Hardy on Radio Shalom the same day. The doctor was worried about a new drug, Rivotril. 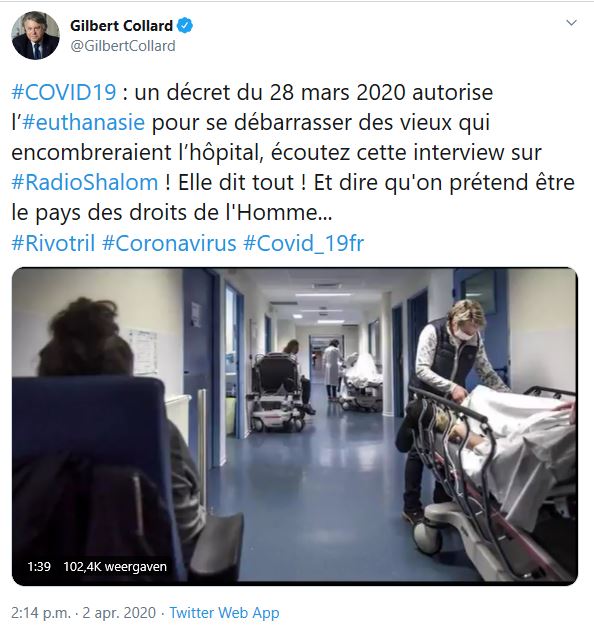 Claim: “A (French) decree of March 28, 2020 authorizes euthanasia to get rid of the old people who would clutter up the hospitals.”

Who is Gilbert Collard?

He is a French lawyer and politician. He was first close to left-wing parties in his youth. Then he got close to the extreme right and the candidate Marine Le Pen. He is now a member of the European Parliament. He is often accused by the media of spreading fake news on his Twitter account.

What is this decree?

On March 28, the Prime Minister and the Minister of Health put in place a new decree, which complements the decree of March 23. The government’s website states that this decree prescribes “the general measures necessary to deal with the covid-19 epidemic within the framework of the state of health emergency”. The first article discusses the drug Rivotril, which is at the heart of the debate. Its primary use is to help patients who cannot be admitted to intensive care or for whom a decision has been made to limit active treatment.

What has the new decree changed?

The decree relaxes the rules for prescribing the drug. Doctors in the city can for example use it on patients, whereas before it was only used in hospitals.

On Twitter, Gilbert Collard announced that this decree authorized euthanasia. However, this fake news is contested by health care workers. Olivier Guérin, professor of geriatrics at the CHU of Nice said in a press release that “in this major and anguishing crisis we are living through, we cannot allow such messages to be conveyed that would suggest we euthanize our elders.” The release also states, “Administering Rivotril to a patient does not mean stopping care. On the contrary, when the situation deteriorates and in certain circumstances, it means accompanying the patient to alleviate his suffering.”

The claim is false: This decree does not allow doctors to euthanize seriously ill people with the virus, but facilitates access to Rivotril, to relieve patients at the end of life.

Uncheckable: „Only three people died in the construction of stadiums for the FIFA world cup in Qatar”
June 13, 2022
Search
Other fact checks
Recent Comments
Archives
Categories
Go to Top