“We have tripled the testing capacity of potential coronavirus patients! If a few days ago we could make 600 tests per day on average, today we can test approximately 1700 patients.” This claim by Romania’s vice prime minister Raluca Turan turns out to be mostly false.

On the 24th of March, in a Facebook update regarding the pandemic situation, the vice prime minister of Romania, Raluca Țurcan, declared that the testing capacity for COVID-19 had tripled when compared to previous days, from a daily average of 600 to 1700.

This information was relayed from the Center of Strategic Communication of the Ministry of Internal Affairs, an institution set up by the government on the 24th of February to manage the looming pandemic.

The claim was posted on Facebook by the vice prime minister’s official account and included a situational update regarding the situation of the pandemic in the country. In this claim, she specifies that she relayed the information from the Center of Strategic Communication, alongside other data.

In order to verify this claim, two sources have been used: official numbers of daily tests provided by the Ministry of Internal Affairs and declarations coming from Ministry of Health officials regarding the testing capacity.

In this regard, on the 19th of March, an official of the Ministry of Health declared to the national newspaper Libertatea that “the testing capacity is under 100 tests per center per day. […] In this moment we can test a maximum of 700 patients per day in the country. […] But that number isn’t fixed, it’s more of an average.”. So by the 19th of March, there were an average of 700 daily tests according to this official who preferred to remain anonymous.

On top of that, on the 23rd of March the National Institute of Public Health announced new testing measures to better adapt to the rising number of cases. According to a report from Digi24, which also outlines the new regulations introduced, the National Institute of Public Health claimed that the national daily testing capacity was increased to an average 1100-1200 tests per day.

The Center of Strategic Communication offers daily information bulletins regarding the evolution of the pandemic which feature the testing numbers. For this check, we will consider the information available for the period of 2nd – 27th of March. The data from the bulletins will be used in combination with a graph released by the Ministry of Internal Affairs regarding the period of 2nd – 15th of March. As such, we have created a complete graph to illustrate the evolution of test numbers in Romania. 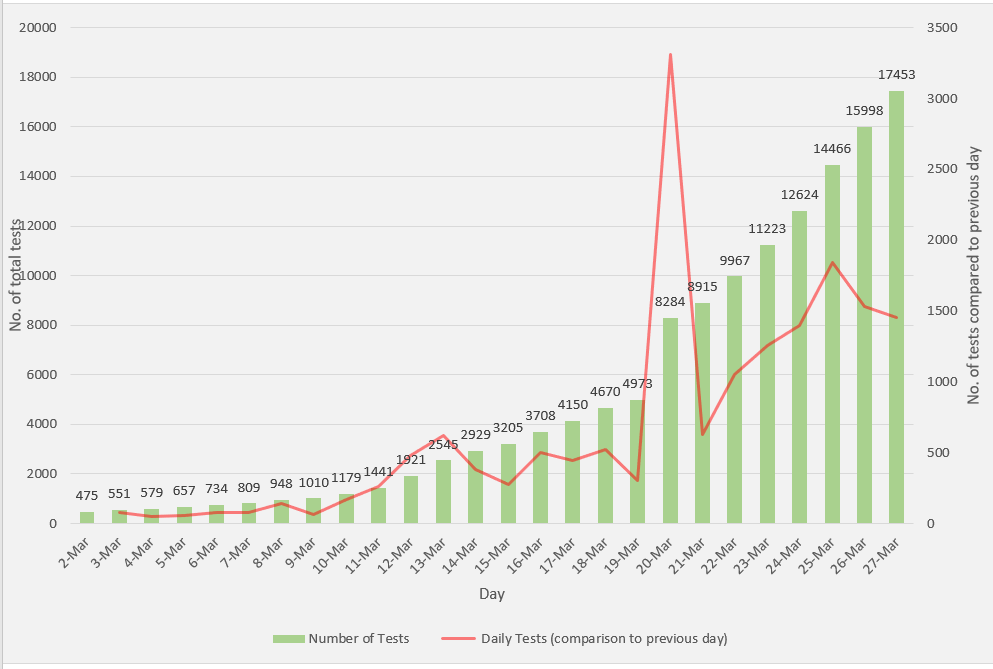 As can be seen, the green bars represent the total number of tests up until a certain day, and the red line indicates the difference in tests from one day to another. The spike on the 20th of March indicates the increase in testing capacity that the National Institute of Public Health mentioned, as on the 20th there were 3311 tests in a single day.

In conclusion, the vice prime minister’s claim that “Romania has tripled its testing capacity” is mostly false. Indeed, the number of daily tests had increased significantly, but it hadn’t reached the average of 1700 that was mentioned in the claim, and neither can it be said that the number tripled, but rather doubled.