False: “The current law on gender-based violence has not reduced the number of women killed”

Vox and other extreme right-wing parties in Europe have a sexist and anti-feminist discourse. Vox’s leaders, Javier Ortega Smith and Santiago Abascal claim “there is no interest in proving that men die in women’s hands as well” while arguing that “the current law on gender-based violence has not reduced the number of women killed”. Their discourse is based on data that, once analyzed, turn out to be false.

In recent years, populist and extreme right-wing movements have gained a presence across Europe. They are opposed to movements such as feminism, a fact that worries the European Parliament because the context before the May 2019 elections showed how Vox and other populist or Eurosceptic parties consider gender policies as a threat to men. Before the elections last May, the possibility was raised, for the first time in the history of the European Parliament, that the far right and the Eurosceptics would form an influential parliamentary block.

Vox is an ultra-right-wing, ultra-nationalist Spanish political party that was formed in 2013. Its leader, Santiago Abascal, was the alderman of the People’s Party in the Basque Country. The party has been criticized for having populist, sexist, xenophobic and reactionary ideas. It began to gain popularity in 2018 and it is currently the third largest force in the Congress of Deputies, Spain’s highest legislative body.

In the European Parliament, parties with extreme right-wing ideas have been grouped into three groups: Identity and Democracy (ID), led by Marine Le Pen and Matteo Salvini; European Conservatives and Reformists (ECR), the most numerous and varied, which includes Vox; and the European People’s Party (EPP). The most threatening fact is that in 22 of the 27 EU Member States there is a growing presence of such parties. 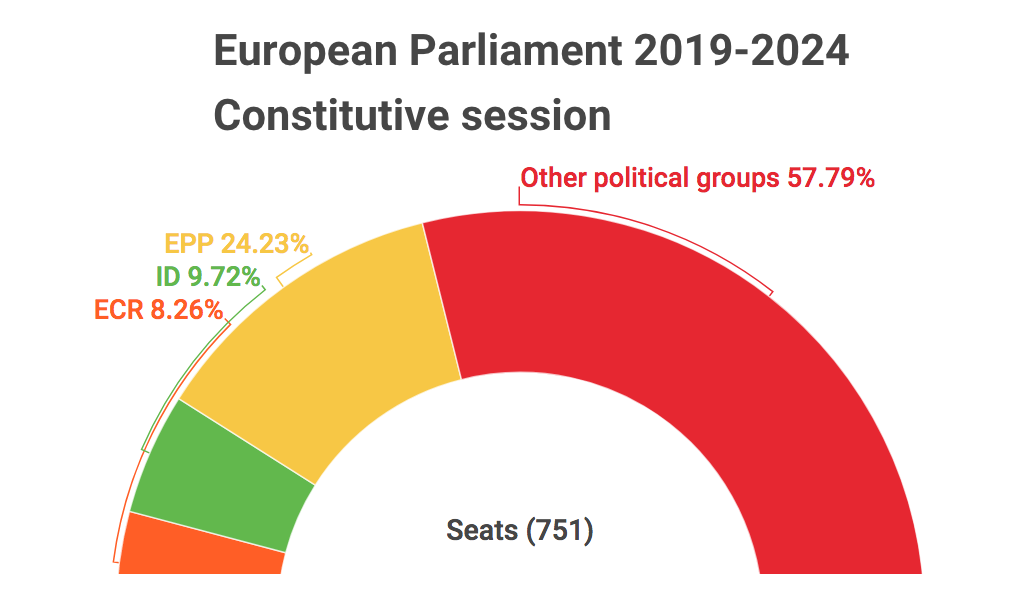 The 15% of votes obtained by Vox in the last Spanish elections (52 seats) positioned them as the third political force in the country, adding even more presence to the parliamentary representation of the ultra-right in European countries. In social media, European leaders reacted to these results. For example, Matteo Salvini congratulated Abascal on Twitter for “the great advance of Vox’s friends, neither racism nor fascism, we just want to live peacefully in our own home”. Here we can see the close links between the different right-wing parties in Europe, as well as the justification of their speech.

The speeches of Vox in Spain are being debated among citizens but also in the media as well. Political parties that make up their opposition constantly accuse them of falsifying data or relying on manipulated statistics. Many of Vox’s discourses are sexist or discriminatory in the grounds of gender; that is why among the Spanish feminist movement there is growing concern and an attempt to delegitimize them. Bearing this in mind, we have analyzed three claims:

We have chosen these three statements that address the legal issue of the current law on gender-based violence. Firstly, they state that this law is useless, they also raise doubts about objective data and blame that there is no interest in showing that women kill men and, according them, this is the reason why data are not correct. Finally, they also denounce the insufficiency or uselessness of the law on gender violence, arguing that it has not contributed to reduce the number of women murdered.

In its political programme, Vox defends the repeal of the law against gender violence and of any “rule that discriminates against another sex”. This directly implies a statement: the law of gender violence, for them, discriminates against the male sex. This argument is based on a misconception that denies reality: the number of women abused and murdered at the hands of men is far greater than the number of men who suffer this type of violence. According to a report by the expert group on domestic and gender violence of the Spanish General Council of the Judiciary, the victims of abuse are mostly women. The study on sentences for murder of a partner or former partner reveals that between 2016 and 2018 there were 151 murders of women who died at the hands of their male partner or ex-partner compared to 25 men, 4 of whom were killed by people of the same gender. That is, 86% of those killed were women and 88% of the assailants were men. This data – consistent with the pattern of the period 2008-2016– show that it is mostly men, from the position of power legitimized by the patriarchy, who murder women. 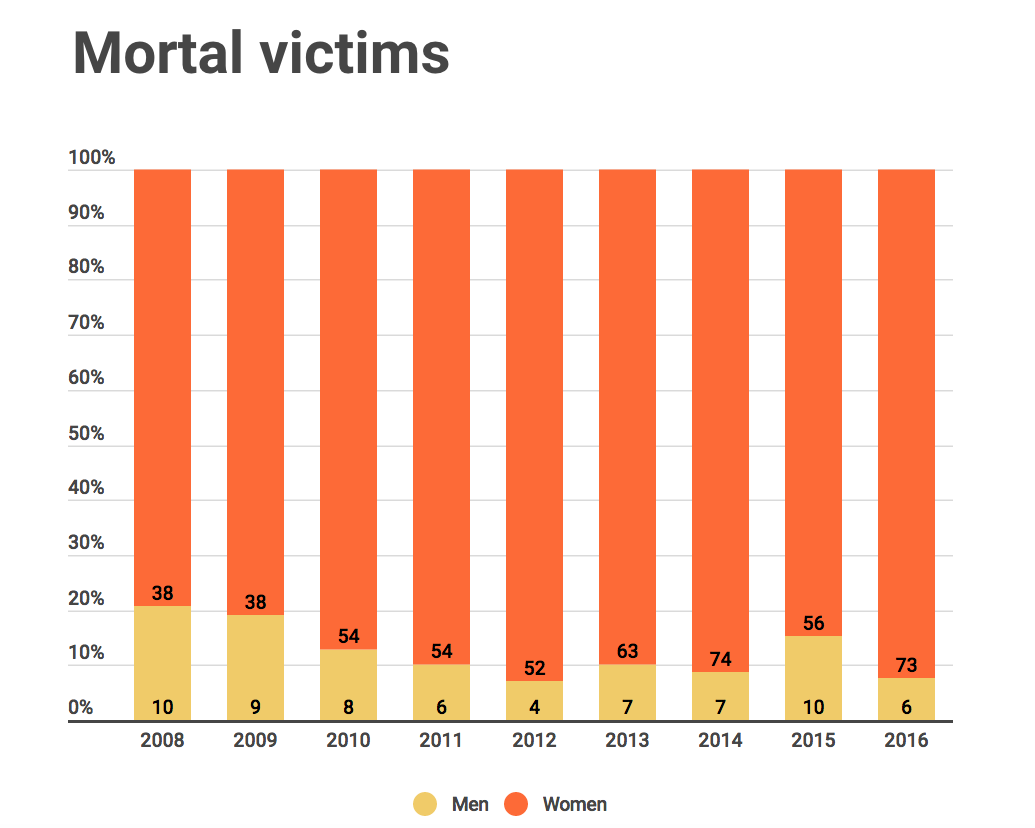 Source: own elaboration (data from the Spanish General Council of the Judiciary)

“Data on men dying at the hands of women are not provided. They are hidden because there is no interest in proving that men die in women’s hands as well”

Precisely, the General Council of the Judiciary, for more than a decade, has been compiling in public annual reports both the number of men and women who die in the field of domestic violence at the hands of their partners or former partners. In fact, we can see the data in the previous infographic. In addition, Cadena Ser tried to disprove Vox’s discourse, so we observe that some national media maintain critical distance from the party’s position. However, as Antoni Rodon, lecturer of political science at Pompeu Fabra University highlights, the rise of right-wing parties has generated a “media boom”. New parties, such as Vox, have taken advantage of the situation and have capitalized on their growing space in the media to disseminate their positions.

Vox’s third claim is also false because since the Organic Law 1/2004 of 28 December on Integrated Protection Measures against Gender Violence was passed, the number of deaths has been reduced. According to the Government Delegation for Gender Violence, which is the body that keeps track of the number of deaths due to gender violence, the following data are provided: on 2003 there were 72 deaths from gender-based violence, while in 2019 there were 55. Moreover, if we consider the average number of women killed in the first eight years (2004-2011) that the law was in force, the figure rises to 67 women, while in the last eight years (2012-2019) the average is 53. With these data we can say that the number of gender violence murders has been substantially reduced since the existence of this law.

We conclude that Vox’s extreme right-wing speeches threaten the feminist movement. It is essential that media organizations provide arguments against this type of speeches, thus contributing to stop the spread of disinformation. The best way to counteract these discourses is by contrasting the information political parties use to justify their arguments. Bearing in mind the aforementioned checks, we can state that Vox’s claims on gender violence are false.

Read more about how we analysed Vox’s speeches on gender violence in our Behind the Facts blogpost.