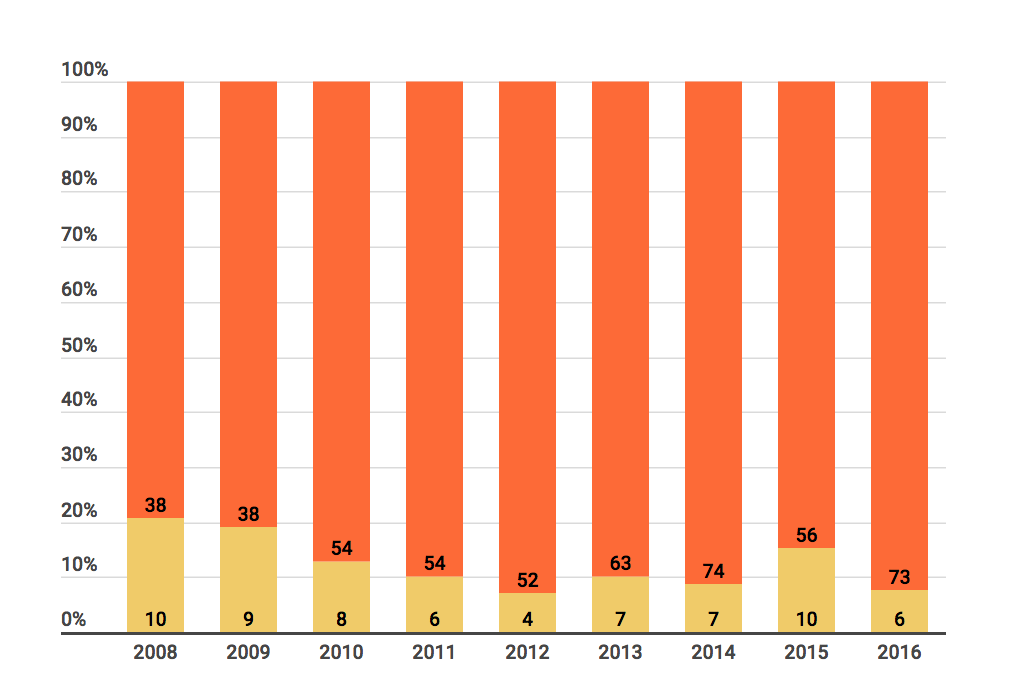 Analysing Vox’s position on gender violence has required us to frame the rise of right-wing movements in Europe, select claims from their leaders in media outlets and use relevant sources –reports by the Spanish General Council of the Judiciary and experts– to debunk their discourses.

First, in order to understand the rise of Vox in Spain, it was necessary to properly situate the rise of the extreme right-wing movements in Europe. To frame the phenomenon at European level, we have taken as a reference the elections of May 26, 2019 of the European Parliament. The polls made before these elections announced a very large growth of the ultra-right groups, which in the end was smaller than expected. These predictions though, led to the ultra-right gaining space in the media. Results from these elections have been crucial to provide the context and situate our analysis in the current European political map. In addition, social networks have been very useful to see the activity of the main political representatives of this movement. For instance, Twitter is a platform in which various actors can freely express their opinions and we have seen how politicians like Matteo Salvini in Italy openly congratulate their colleagues and reinforce their speeches on the Internet.

To reinforce the information, we interviewed Antoni Rodon, professor of Political Science at the Pompeu Fabra University, who gave us a professional analysis of the growth of the ultra-right wing in the European parliamentary elections, which served us to argue that these elections are a turning point. Rodon believes that the growth of the extreme right is due to a double dynamic. On the one hand, he explains that since the European elections are considered “second-rate elections”, the decision to vote for a particular party is taken under different parameters than normal. Many people do not know about the European Parliament while other people take the opportunity to exercise a “protest vote”, against the European institutions and state governments. The extreme right tends to capitalise on criticism of the European institutions.

On the other hand, there is a dynamic of discrediting the traditional parties. The “mainstream” parties have been losing protagonism in all countries. New parties, such as Vox, take advantage of this dynamic in European elections. New appearances are intensively followed by media organizations, generating a “media boom”.

After situating the rise of the right-wing movements in Europe, we fact-checked three claims made by Vox’s leaders in major media organizations (Cadena SER and the Spanish Public Television).

To refute this first assertion by Javier Ortega Smith, we have used data collected by the Spanish General Council of the Judiciary. Annually, they count the number of deaths (both men and women) at the level of the partner or ex-partner. We have compared the number of women killed and the number of men killed. We have also looked at the gender of the person who committed the crime. These data are public, so they are accessible to the entire population, including Vox party that has disseminated false information that differs from these data. In order to have a more complete vision of the issue and to know exactly which law we were dealing with, we have analyzed the Organic Law 1/2004 of 28 December on Integrated Protection Measures against Gender Violence.

“Data on men dying at the hands of women are not provided. They are hidden because there is no interest in proving that men die in women’s hands as well”

The second claim was also false and to deny it we have used transparency portal of the General Council of the Judiciary. In this portal, the sentences that take place in Spanish territory are separated by courts which allows us to see how many condemnatory sentences are have been done in each court, whether the victim is a man or a woman. All this information is public and the communication office of the judiciary is responsible of publishing it every year to ensure that all citizens can access the data.

To prove that the third sentence is also false, we have used the data published by the government delegation on gender violence. Using their reports we have made an average of women murdered in the first years of the law (2004-2011) and compared it with the average of the last years, in which the law is already consolidated (2012-2019). We have not used data from years prior to the publication of the law because we believe that the socio-political context in which Vox’s claim was made is very different from that of the early 2000s. Including such data would not have given us realistic results in line with today’s society.

To complete our analysis, we have used the knowledge received from the course Language, community and ideology, that two of us have done in a minor about gender studies. The subject was taught by Montserrat Ribas Bisbal, a linguist specializing in discourse analysis and its relationship with power and ideology. The skills obtained in this course have allowed us to understand Vox’s discourse in relation to the social construction of identities and the impact on public opinion, all this taking into account the gender perspective.

False: “500 000 people participated in Berlin in a demonstration against the Russian invasion”
June 10, 2022