Mostly false: “80% of the total load of BPA and endocrine disruptors come from food”

On June 24, 2018, speaking on France Culture, the toxicologist André Cicolella claimed that “80% of the total load of endocrine disruptors comes from food.” While plausible, this figure has yet to be substantiated.

On an episode of the show “De cause à effets” (EN: “From Cause to Effects”) that aired on France Culture on June 24, 2018, André Cicolella, a toxicologist and president of the Réseau Environnement Santé (EN: Health Environment Network), stated: 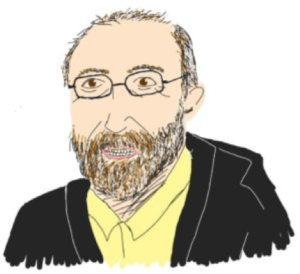 “80% of the total load of endocrine disruptors comes from food.”
André Cicolella (drawing by Marie Desrumaux)

Contacted by phone, André Cicolella himself questions the source of his assertion. He remains vague, suggesting that the percentage is “an estimate from ANSES (Agence nationale de sécurité sanitaire de l’alimentation, de l’environnement et du travail; the French Agency for Food, Environmental and Occupational Health & Safety) for the major categories of endocrine disruptors.”

On the ANSES website, the page on endocrine disruptors explains that experts at the agency have studied “around thirty substances.” The article also mentions that these studies “determined the share of exposure from food (80%).” Skimming the text, it is possible to deduce that André Cicolella’s claim is based on the research that led to this figure.

However, the percentage mentioned here comes from two studies related to “the health effects and the uses of bisphenol A” conducted in 2013. That is to say, a very specific substance. André Cicolella is thus over-generalizing when he applies the 80% figure to all endocrine disruptors.

Bisphenol A (BPA) is a synthetic chemical substance used as a component in certain plastics, resins, and inks. It is used in the manufacture of food containers such as (feeding) bottles, as well as certain toys. It can also be found in the protective coating that lines the inside of cans, and even on sales receipts.

Humans can be exposed to BPA when the molecule spreads from the plastic to the food. This phenomenon especially occurs when a food product wrapped in plastic is cooked or heated. Bisphenol A can also transfer to food when resins protecting the inside of cans degrade.

Scientists concurred that BPA was an endocrine disruptor. Studies showed that it affected reproduction and the development of breast and prostate cancer, and played a role in certain cardiovascular diseases, as well as in the appearance of behavioral and development issues in children.

France banned the sale of feeding bottles containing bisphenol A in 2010. The European Union followed suit in 2011. Since January 1, 2015, any container or utensil containing BPA and designed to come in direct contact with food is prohibited from sale in France.

Context : No data for all endocrine disruptors

Sakina Mhaouty-Kodja, a research director at CNRS (the French National Center for Scientific Research) and an expert with ANSES, confirms that there are “no figures” regarding the share of food in exposure to major types of endocrine disruptors. “This variable is unique to each molecule,” the neuro-endocrinologist explains. We know, she points out, that “exposure to certain substances, like bisphenol A and phthalates, primarily occurs through eating.” But the claim that 80% of all endocrine disruptors are spread via food is still impossible to verify. “There is not enough available data,” concludes Sakina Mhaouty-Kodja.

This opinion is shared by Robert Barouki, a biochemist and toxicologist at INSERM (Institut national de la santé et de la recherche médicale; the French National Institute of Health and Medical Research). “The majority of contamination to endocrine disruptors comes from food,” the researcher states. And according to him, pesticides constitute “the bulk of the army” of endocrine disruptors present in food.

In short : As André Cicolella himself questions the source of his assertion, we concluded that the claim : “80% of the total load of endocrine disruptors comes from food” is mostly false, at least.