True: “Madrid is among the European cities with the highest number of deaths per million inhabitants”

The leader of Podemos party, Pablo Iglesias, stated during a televised electoral debate on 21 April that, due to the coronavirus pandemic, the community of “Madrid is among the European cities with the highest number of deaths per million inhabitants (2,207) more than London, Paris, Rome or Berlin”. The claim turns out to be true.

The coronavirus, first detected in the Chinese city of Wuhan in December 2019, spread rapidly across Europe in early 2020, forcing different governments to adopt severe measures such as lockdowns that affected around 250 million people. Italy became the first country in the European Union to suffer the ravages of the pandemic and quickly began to register high rates of infections and mortality that soon spread to other European countries.

In a similar vein to other European countries, the coronavirus pandemic began to hit Spain in March 2020. As a result, the government of Prime Minister Pedro Sánchez declared a state of alarm throughout the Spanish territory on 14 March, thus limiting mobility and establishing other restrictions to control the spread of the virus. In October, the government granted some freedom to the different regional governments of the country to implement their own measures, which generated discrepancies at the political level between the different parties and regions of the country.

On 10 March 2021, the president of the Community of Madrid and member of the conservative Popular Party (PP), Isabel Díaz Ayuso, called snap elections for the capital’s regional government on 4 May. The contest led Pablo Iglesias, leader of Podemos, a far-left party, to resign as vice minister of Spain to run for election as a candidate himself. The electoral campaign began on April 18. The campaign has mainly focused on the way in which Díaz Ayuso has handled the coronavirus pandemic in Madrid, the region of Spain that has imposed the fewest restrictions despite having high rates of infections and mortality among its population.

The first electoral debate between the candidates to preside over the Madrid government was held on 21 April. It was produced by Madrid’s public television Telemadrid and broadcast also by Spanish public television (TVE) and the private channel La Sexta. During the debate, the leader of Podemos, Pablo Iglesias, referred to the deaths caused by the coronavirus pandemic in Madrid and claimed that “Madrid is among the European cities with the highest number of deaths per million inhabitants, 2207, more than London, Paris, Rome or Berlin”. 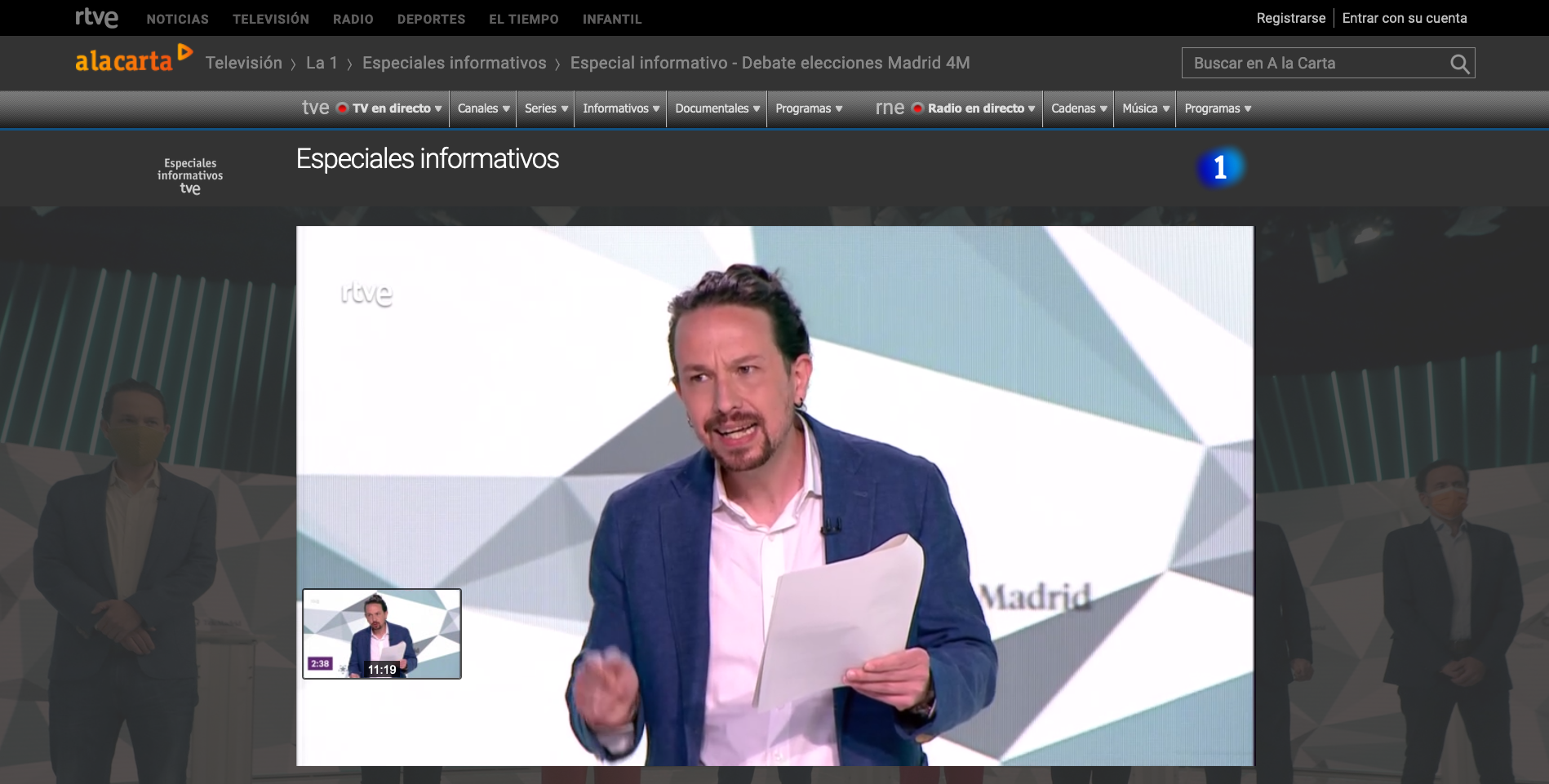 Screenshot of Pablo Iglesias during the electoral debate

Is Madrid at the same level of mortality as other European capitals? On 10 April, journalist Pepo Jiménez, based on data from Statista, compared the number of deaths per million inhabitants of Madrid with other European capitals such as London, Paris / Ile de France, Rome / Lazio and Berlin. Data provided by Jiménez in Twitter revealed that Madrid presented 2,207 deaths per million inhabitants. 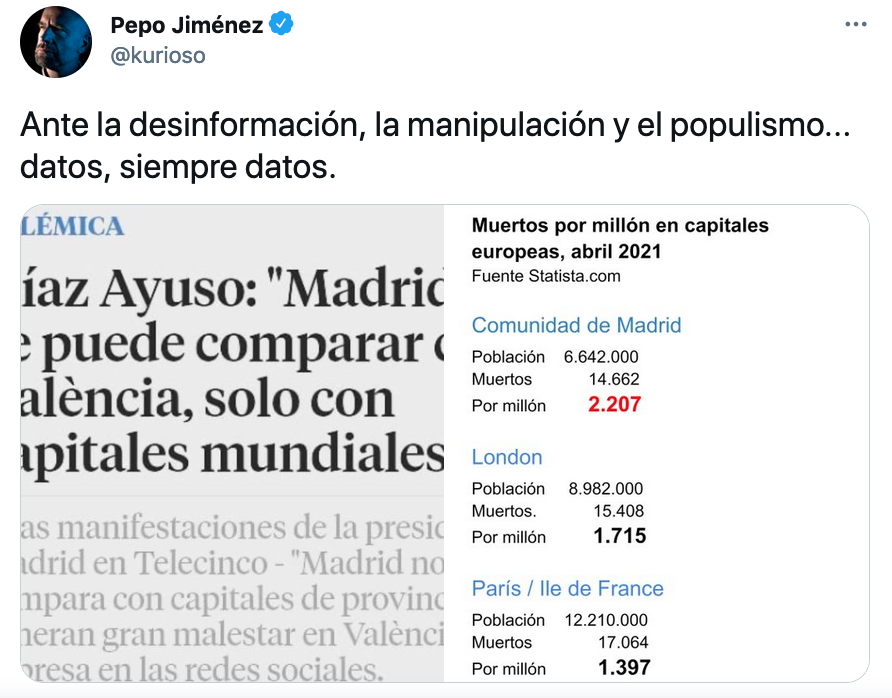 To provide an updated account of Iglesias’ statement, the most recent data provided by Statista on April 22 was also reviewed. According to data, in Madrid, as of April, 14,889 people have died from complications derived from the COVID-19 disease, thus positioning Madrid as the Spanish community with the highest number of deaths. Considering that the population of the Community of Madrid is 6,642,000 people, then the mortality rate per million inhabitants is 2,241. To obtain this figure, the number of deaths has been divided by the population and multiplied by one thousand. 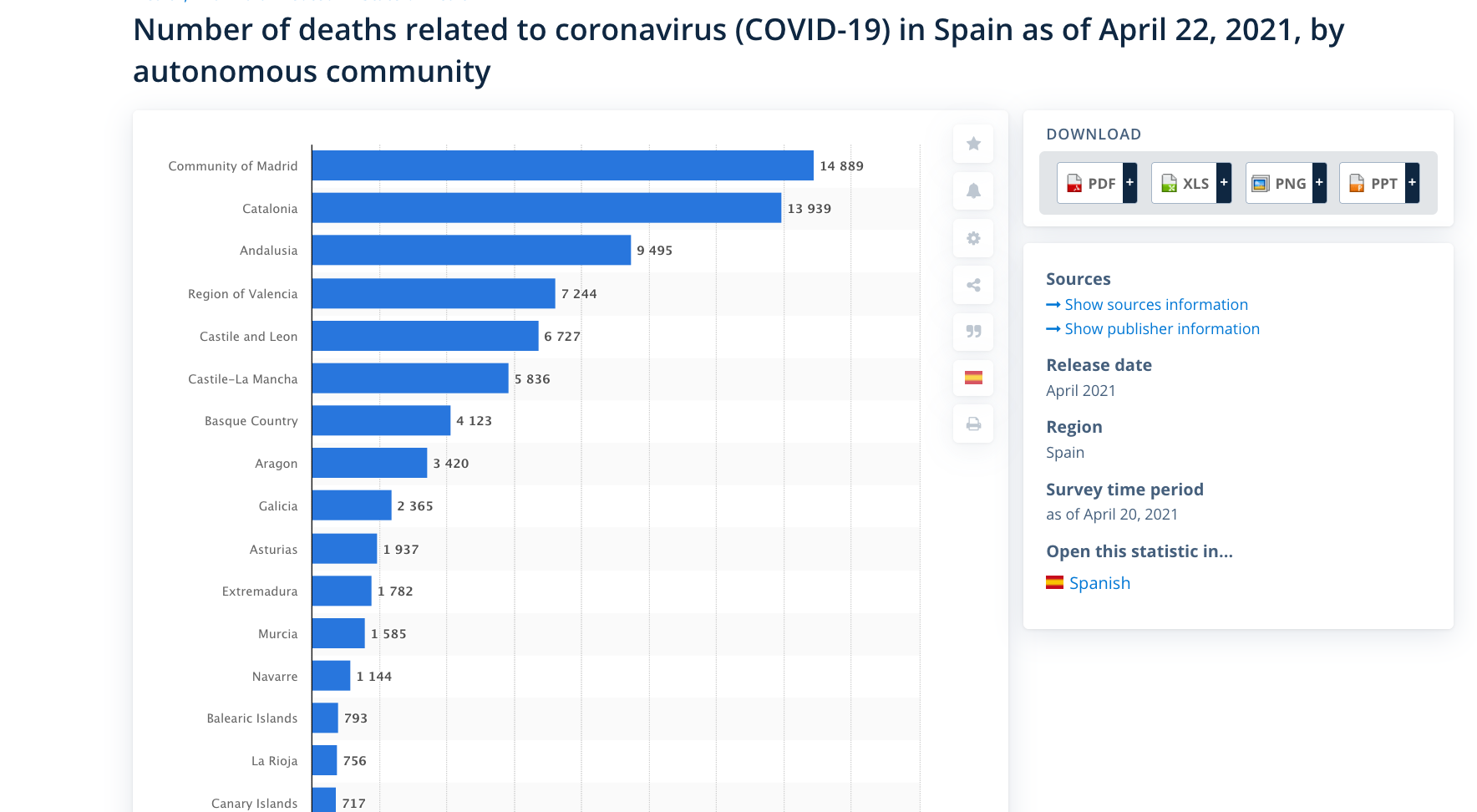 Screenshot of Statista showing number of deaths related to COVID-19 in Spain as of April 20, 2021, by autonomous community.

Continuing with the rest of the European capitals that Iglesias mentioned in his statement and applying the same mathematical formula, it was found that in London the number of deaths per million inhabitants is 1,780; in the Rome / Lazio region it is 1,277; in Paris / Ile de France it is 1,485; and finally, in Berlin it is 875. A comparison between the number of deaths per million inhabitants in those European capitals is presented in this graphic. 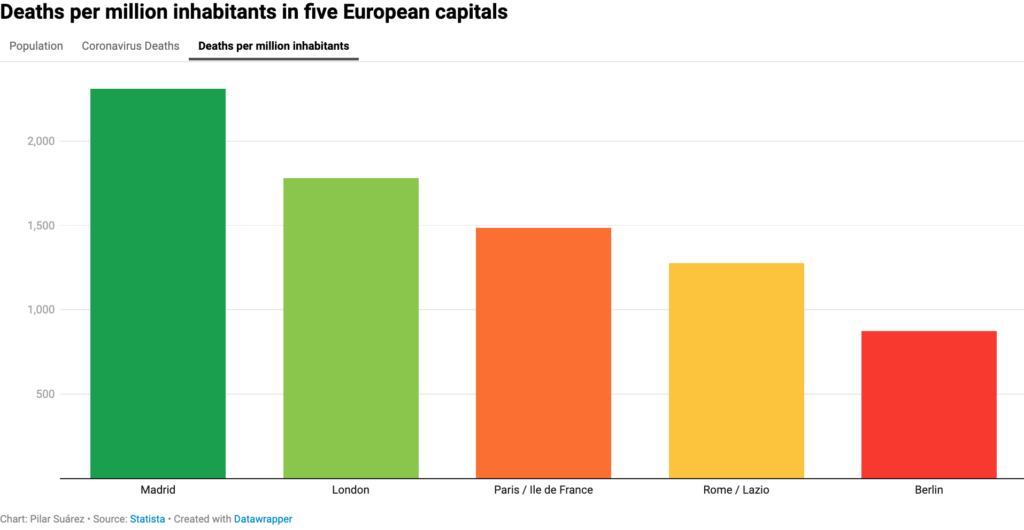 Former official of the World Health Organization, Daniel López-Acuña has been contacted to explain why in Madrid the number of deaths is greater than in other European capitals. According to López-Acuña, “the penetration of the virus in Madrid has been greater than in other European cities and in other Spanish regions largely due to the lack of sufficiently thorough restrictions to mobility and social interaction”. As noted by the interviewee, a study conducted by the Institute Carlos III in conjunction with the different regional governments has determined that when compared to the rest of the Spanish regions, the mortality of Madrid “ranks among the highest, and is close to 8 times higher than the one observed in Canary Islands for example”. Another factor contributing to the higher mortality rates in Madrid “could be the very high rate of deaths occurring among the population resident in nursing homes”. As stressed by López-Acuña, “older people had greater severity and mortality than other groups of the population, were not adequately and timely refer to hospitals for appropriate care and unfortunately experienced very high lethality”.

Considering these factors, “Madrid has contributed not only with the largest absolute number of deaths to the total of people who passed away because of COVID-19 in Spain but, once measured by population size and expressed in mortality rates, it shows one of the highest mortality rates in the country and among European capitals”. As noted by López-Acuña, in Madrid “mortality is scandalously high, current incidence rates are among the highest in Spain and the current saturation of Intensive Care Units is also tremendously high”.

As the interviewed expert Daniel López-Acuña mentioned, it is always better to do a deep analysis by standardizing the age groups when trying to compare between different cities or countries. That being said, statistical data observed in this fact check and the expert’s vision conclude that the data in Madrid are tremendously negative and therefore it can be said that Madrid is one of the European capitals with the worst mortality rates. Thus, we conclude that the statement made by Pablo Iglesias during the electoral debate is true.