Uncheckable: “Ursula von der Leyen is forcing EU-members to go carbon-neutral whilst taking a private jet for half of her worldwide missions”

In January, Identity and Democracy Group posted the following via Twitter: “The European Commission chief Ursula von der Leyen is pushing for a new ‘Green Deal’, forcing Member states to go carbon-neutral by 2050, but takes a private jet for half her worldwide missions.” Although public tender data suggests an increase in private air travel among the leading European institutions, this claim, however, turns out to be uncheckable.

The president of the European Commission, Ursula von der Leyen, has announced six ambitions for Europe during her tenure, one of them being the Green Deal. This deal aims to make the EU completely climate neutral by the year 2050. To reach this goal, the president proposes the European Climate Law to turn the political commitment into a legal obligation upon EU members. 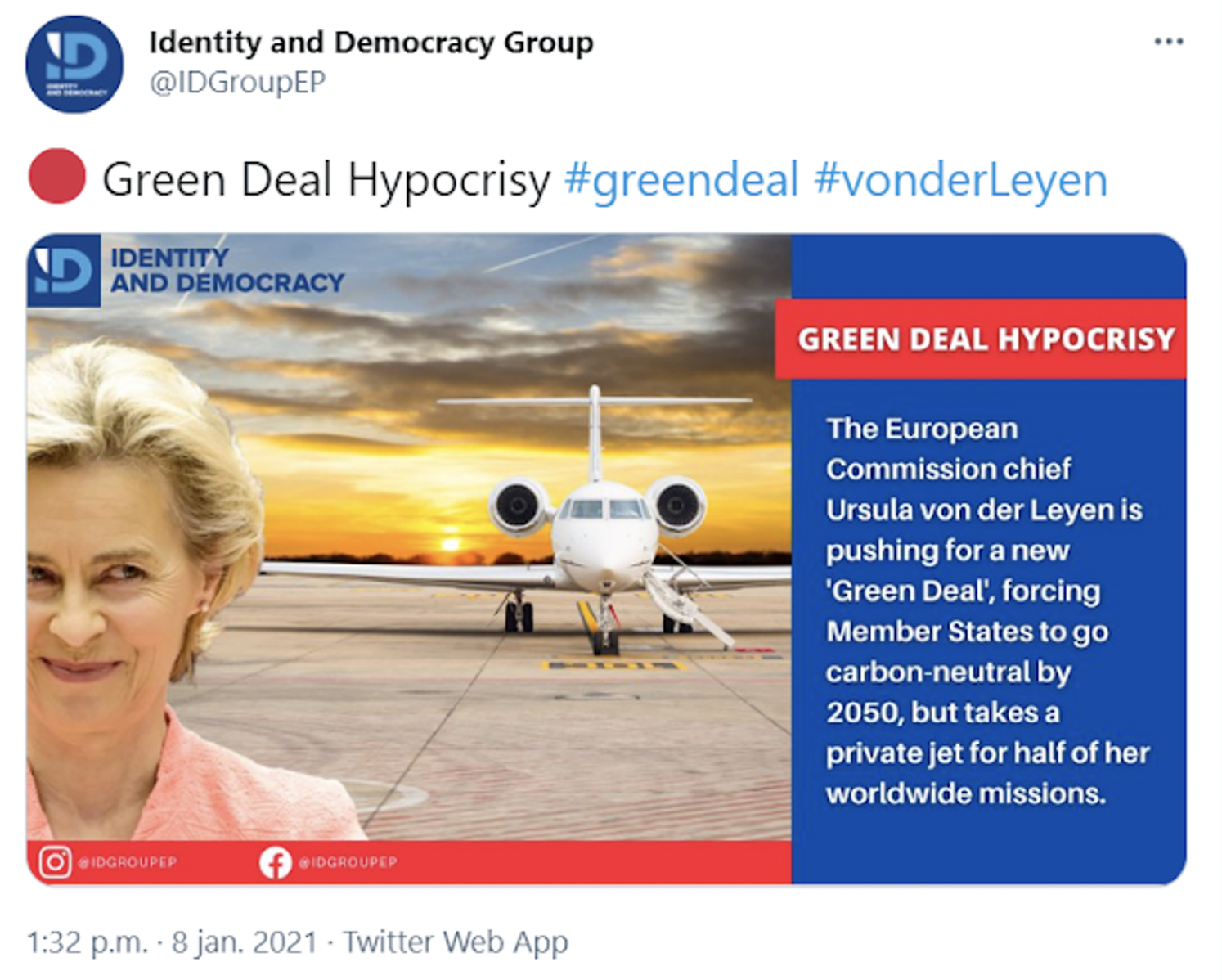 ID did not respond to the question of what their claim was based on. However, a public tender document containing the budget for ‘air-taxi’ flights, or private jets, for senior EU commissioners shows an increase in budget from EUR 7.14 million to EUR 10.71 million. That is a 50% increase in budget in the past five years:

“The initial contract was awarded for a total amount covering the entire duration of the contract. However, the analysis of expenditure during the period already elapsed has led to the conclusion that this threshold will not be suffice to cover the needs of the European institutions until the expiry date of the contract, i.e. 30.4.2021.”

‘Air-taxi’ flights, however, are not only used by the President and the European Commission. According to the document on the EU’s tenders database, “chartered jet aeroplane services are also used for the European Parliament Presidency, for the President of the European Council, for the High Representative of the Union for Foreign Affairs and Security Policy, and any accompanying persons, mostly in the European Union.”

The original contract by the EU stated that the service provider would use the following six types of aircraft used for air-taxi transport services:

The same document estimated that there would be about 871 total flight hours throughout the five-year contract. The flight hours were divided into the following categories:

These predicted hour allocations were not enough, forcing the EU to increase their budget by nearly EUR 3.5 million.

The predicted hours show that the majority of chartered jet aeroplanes are used for missions outside of Europe, classifying them as “worldwide” missions. However, there has been no evidence proving which flights the President of the Commission has taken or will take in the future.

On the EU website, missions and meetings of President Ursula von der Leyen are summarised on her transparency page. These are monthly and provide travel and accommodation costs (most of the time) but not means of transportation used per mission. However, on her calendar page, she has many more international meetings than stated on the official ‘meetings page’, but no details regarding means of transportation or costs are provided. When contacting her cabinet, it was assured that all of the information regarding her travel arrangements could be found here. Her cabinet did not share specific flight details concerning Ursula von der Leyen’s international mission.

Uncheckable: Currently, the statement made by ID can neither be confirmed nor denied. It can be confirmed that the EU has needed to increase their budget for private jet use. With the growth of private jet services, the main European political institutions increase their carbon footprint whilst implementing CO2 restrictions on member states. However, due to a lack of information concerning Von der Leyen’s travel arrangements, it cannot be confirmed that she personally takes a private jet for her (worldwide) missions.

Uncheckable: „Only three people died in the construction of stadiums for the FIFA world cup in Qatar”
June 13, 2022
Search
Other fact checks
Recent Comments
Archives
Categories
Go to Top