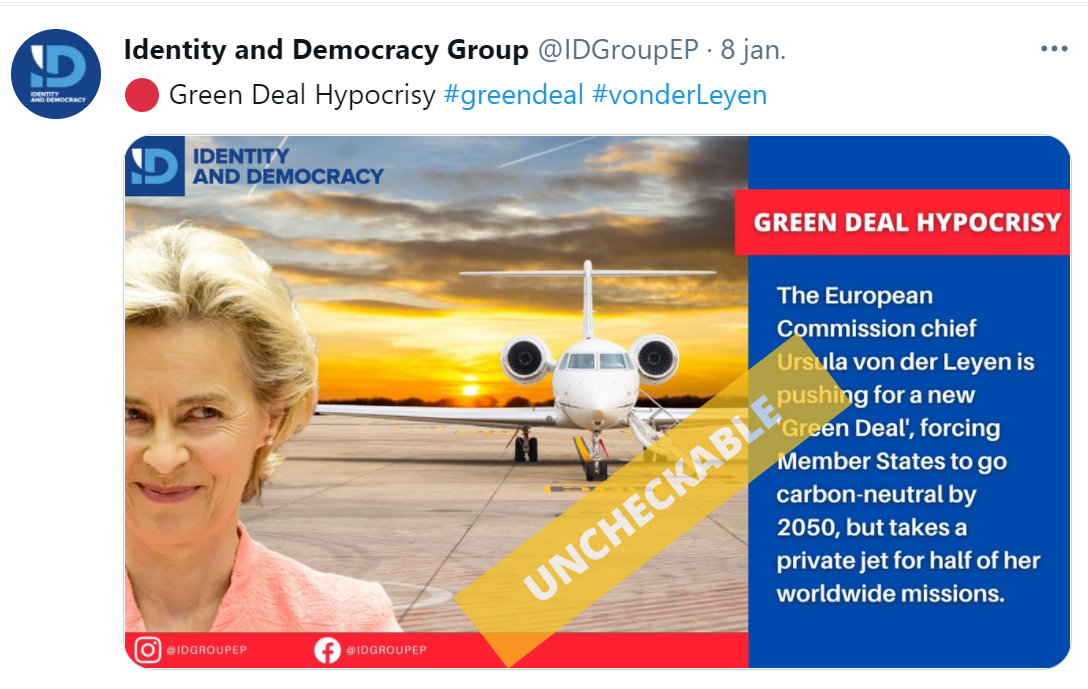 The right-winged political group in the European Parliament, Identity and Democracy (ID), posted the following on their Twitter feed: “Ursula von der Leyen is forcing EU-members to go carbon-neutral whilst taking a private jet for half of her worldwide missions.” The investigation of this claim accusing the European Commission President on January 8th led to some interesting points of consideration. When gathering information on both parties, we discovered that the EU Commission was not as transparent as they claim to be.

“There is total transparency on the President’s travel arrangements, which you can find on her web page.” This was the answer we received after contacting Ursula von der Leyen’s Green Deal cabinet. When asking for the President’s travel arrangements that could support or disprove the ID-group’s allegations, it was ensured by von der Leyen’s cabinet that all the information would be found on the website. After extensive research, the information needed was not found on the webpage and could not be provided by the cabinet. This made us wonder why the EU might not be as transparent as it claimed to be, especially concerning flight information.

A possible explanation for the lack of transparency concerning flight details of Ursula von der Leyen could be a safety protocol. Flight numbers or passenger lists are not shared, perhaps because they could fall into the hands of the wrong people. Even if this information is asked for journalistic purposes, it could be unintentionally spread to people who have other intentions, dangering the President’s safety and other important figures in the EU.

However, the lack of transparency was brought to our attention within the EU and with the Identity and Democracy Group. ID also did not provide us with any information that we were looking for. Even more remarkable, ID also ignored all our e-mails and direct messages on Facebook and Instagram. Meanwhile, ID frequently posted on their socials, meaning that they are active on social media but deliberately chose not to respond to private messages.

An explanation for their one-way communication strategy could be that political groups such as ID use social media only for campaigning purposes. With a PhD in Media and Communication Science, Kajsa Falasca is convinced that political parties “pump out their messages on social media platforms and then let their followers do the work”. By this, she means that they solemnly use social media as a tool for campaigning and advertising. By liking and sharing their posts, followers do their campaigning for them. It could be a strategy used by ID as a way to obtain more followers.

Communication between us, ID and the EU remained a one-way street. As a result, it did not contribute information to validate the fact check about Ursula von der Leyen being investigated. Without the needed information from both parties, the claim remained uncheckable.