Uncheckable: “We’re living through the biggest carbon crash ever recorded.”

The checkability of the claim is connected to multiple unknowns such as relative or absolute terms, annual or total records as well as anthropogenic or total emissions, all of which are discussed below. Because it is such a complicated matter, and it deals with predictions it is uncheckable.
Two weeks after the BBC claim, on the 19th of May, a study was published by British journal Nature Climate Change, which indicated a calculated mean of 17% drop in CO2 emissions per day. Media, such as the Guardian and Forbes have reported on this study saying: record cuts in global CO2 emissions due to lockdowns. This new study revealed new information relevant to the factcheck. 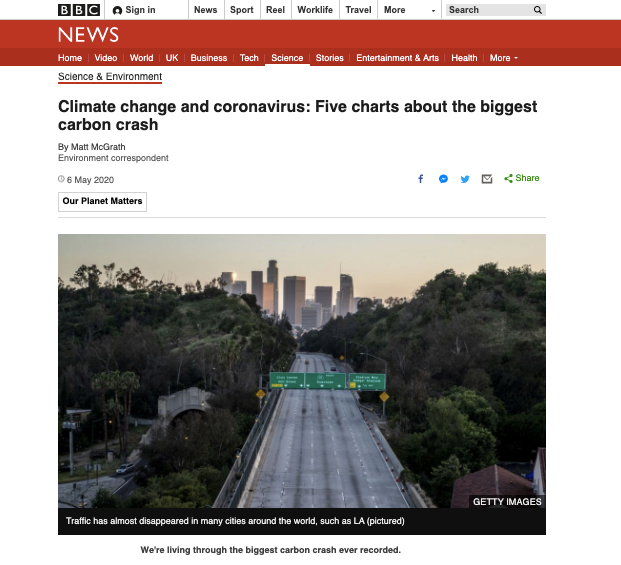 The BBC article uses two primary sources to support this claim: The Global Energy Review 2020 from the International Energy Agency (IEA) and an analysis by Carbonbrief. Both are considered reliable sources. The article also suggests that “multiple sources indicate” that the claim is true.
The analysis by Carbonbrief is mainly a prediction, writing “Coronavirus set to cause largest ever annual fall in CO2 emissions”. Not stating that we are currently experiencing this phenomenon, but merely stating that it is a possibility if trends continue in the same manner throughout the year. The article was mostly based on The Global Energy review 2020 by the IEA, where their calculated projections for annual energy-related CO2 emissions for 2020 were an 8% drop relative 2019. This projection assumes that lockdowns are progressively eased.

During the 100 days of data for 2020 available at the time of the study, they calculated a 3.8% drop in energy-demand, which translates into an estimated 5% drop in energy-related CO2 emissions relative the first quarter of 2019. This equals an estimated 500 million metric tons CO2(MtCO2). There is no reason to doubt that the estimations made based on the drop in energy-demand are correct. It is important to note that declines are not only due to Covid-19, but also due to a milder than usual winter and transitions to green sustainable energy sources.
The IEA wrote in their report that we have experienced “a major drop in CO2 emissions, surpassing any previous declines”. This could have been misinterpreted to refer to the estimated 5% drop in emissions, but it actually refers to the projections. “This sentence should refer to the projected annual reduction of 8%. Unfortunately, we don’t have the quarterly data to be able to substantiate if the quarterly decline in 2020 is unprecedented” says the IEA in an e-mail.

The “biggest carbon crash ever recorded”

“During the depression global CO2 emissions dropped from 1145 billion metric ton carbon (GtonC) in 1929 to 847 GtonC in 1932. That is a 26% drop, which is 5 times more than the biggest carbon crash ever recorded. Note that I use tons of carbon, not tons of CO2, which would be 44/12 = 3.67 times larger.” says Pieter Tans, senior scientist at NOAA Global Monitoring Laboratory, referring to the estimated 5% drop in energy-related CO2 emissions.
It is important to note that while carbon is an element, CO2 is a compound made up of carbon and oxygen. In the BBC article they first talk about carbon, but go on to discuss CO2 emissions, so I can assume that they were referring to a drop in CO2 emissions.The greatest annual decrease in CO2 emissions was in the years 1944-1945, when emissions fell by 845 MtCO2, according to Carbonbrief.

One thing is certain, the IEA’s estimated 5% is not greater the largest declines in CO2 emissions ever recorded. However, their projections, if they come to fruition, might be. The projected 8% decline equals 2600 MtCO2. “Any comparisons with historical declines are comparing annual declines, rather than quarterly declines. In absolute terms the annual decline projected for 2020 would be the largest since records began during the industrial revolution. In relative terms the annual decline is the biggest since WWII.” says the IEA.
The problem here though is that the BBC article writes “biggest carbon crash ever recorded” and not “biggest annual carbon crash ever recorded”. But since the source used in the article is concerned with annual declines, it is safe to assume that the BBC article was also referring to an annual decline, but we cannot know this for sure.

Now, over a month after the BBC article was posted, a new study has been published in the peer-reviewed British journal Nature Climate Change where an estimation of a 17% decline in CO2 per day. “The total change in emissions until the end of April is estimated to amount to –1,048 (–543 to –1,638) MtCO2, equivalent to a –8.6% decrease over January–April 2019” said the study. This study is made over 4 months and is based on daily data of activity for six economic sectors. That is because CO2 emissions are reported as annual values, often released months or years after the end of that year.  That being said, they expect the annual decline to lie between 4.2% and 7.5%.

What does it mean?

The UN Environment programme published a story which said that anthropogenic CO2 emissions are causing CO2 concentrations to accelerate. It is important to note that CO2 emissions and CO2 concentrations are different, and that concentrations of CO2 in the atmosphere will only decline once we reach net-zero. “CO2 concentration is increasing. This level is the historical record (in the last 800,000 years), although, May 2020 is expected to be even higher. And if we look at the trend in the past few years or decades, the increase is accelerating.” said Pascal Peduzzi Director of UNEP/GRID-Geneva and Programme, Manager of the World Environment Situation Room.
CO2 emissions, despite the estimated 17% reductions, are still at 83%. The NOAA states on their website that any “missing” CO2 emissions due to covid-19 do not stand out yet, and that the drop in emissions needs to be large enough to stand out from natural CO2 variability caused by how plants and soils respond to seasonal and annual variations of temperature, humidity, soil moisture, etc.

In short, the “missing” CO2 emissions are so small they cannot be detected, and due to our remaining CO2 emissions, CO2 concentrations continue to rise. Peduzzi also stresses that we are going about this change in the completely wrong way. The article is in this sense misleading, as it makes it seem like the drop in CO2 emissions that we have seen due to the lockdowns have an impact.
It is also relevant to take into consideration anthropogenic (caused by humans) and other sources of CO2 emissions. In order to understand why this is important, we can put it next to the impact that the Australian forest fires had. According to a publication by the Australian Government they estimate that the fires released 830 million tons of carbon dioxide equivalent (MtCO2-e).

In conclusion, the claim “We’re living through the biggest carbon crash ever recorded” is uncheckable. In absolute terms (the total amount of CO2 emissions) it is a probable annual prediction, but in relative terms(percentage) it may not be. This is to say if it is indeed an annual comparison to previous records.
In that case, the new study by the British journal Nature Climate Change and it’s estimated mean of a drop of 1048 MtCO2 would be higher than the previous annual record, not taking the Australian forest fires into account.
It also depends on if the CO2 emissions accounted for are the global total emissions or only anthropogenic emissions. During the recession 2008-2009 they saw a decline in CO2 emissions followed by a sharp rise in CO2 emissions the following year. CO2 emissions may very well rise again in the same manner this year, unless the correct structural efforts toward sustainability are made. Since measures to measure CO2 emissions in real-time are not readily available, and we are comparing to annual values, we will not know before the annual values for 2020 are published.

So, it is uncheckable for the following reasons: we don’t know if it is an annual or total comparison, if it is referring to anthropogenic or total CO2 emissions or if it is made in absolute or relative terms. The predictions are valid, but CO2 emissions for 2020 haven’t been reported on yet.
The claim is hyperbole, making it sound like a grand phenomenon that anthropogenic CO2 emissions have dropped, when in fact we would need emissions to reach net-zero before it has a significant impact on CO2 concentrations. Although, it is a step in the right direction if it leads to sustainable measures being put into place.