Blog: The D-Day of European tourism 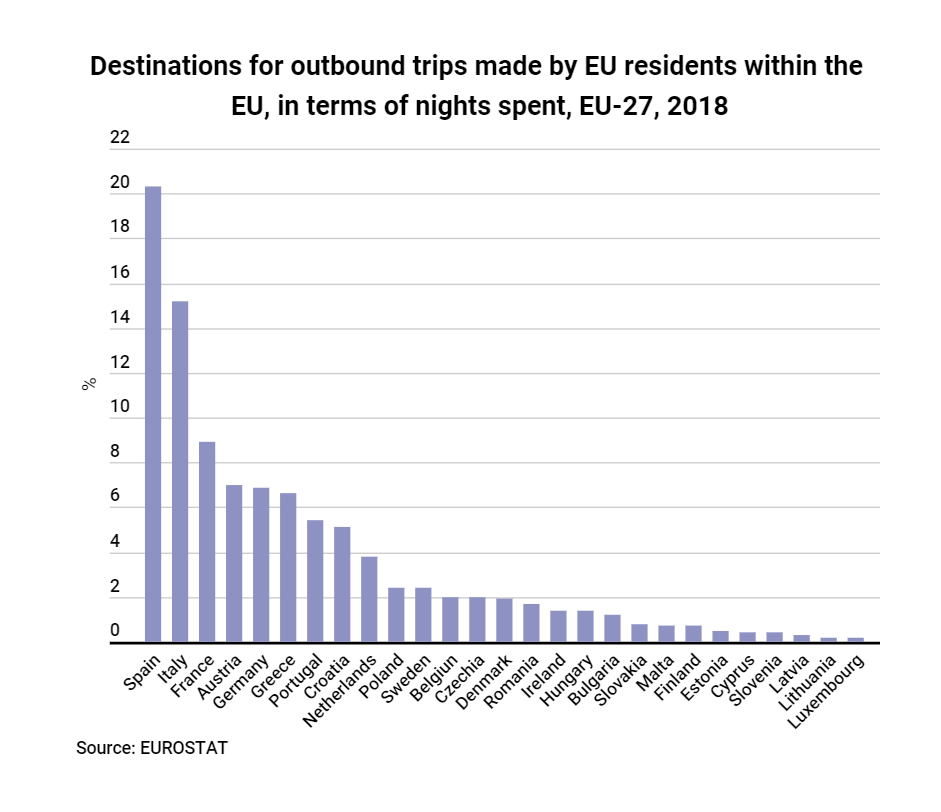 On 15 June the borders of the Member States of the European Union and those belonging to the Schengen area and the United Kingdom will reopen. Foreign Minister Luigi Di Maio called it the “D-Day of European Tourism”.

Italy and Spain
On the restart of the grand tour, however, hovers the threat of the so-called “black list”, which would result in unequal treatment of the countries most affected by the pandemic, first of all Italy and Spain. The two premiers Giuseppe Conte and Pedro Sánchez, to face the risk of ghettoisation, wrote a letter to the President of the European Commission Ursula Von Der Leyen on June 4.

The request is a timely elimination of border controls, to be carried out in a “coordinated, non-discriminatory and on the basis of clear and transparent epidemiological criteria”.

The letter calls on the European Centre for Disease Control and Prevention (ECDC) to play a leading role in defining common rules that can ensure a safe reopening.  Freedom of movement in the Schengen and EU area, as recalled, is in fact “one of the fundamental elements of the European project”. It is not surprising that it is precisely these two countries, brought to their knees by the Coronavirus emergency, that are pushing for a common restart. One of the goals is also to prevent further economic problems. According to Eurostat, in fact, in 2018 Spain and Italy were respectively the first and second favourite destinations for European travellers and the entire tourism sector accounts for about 12/13% of the GDP of both countries.

With the aim of resolving “all the contradictions to the European spirit”, the Italian Foreign Minister Di Maio has also been working in recent days to get the tourist season off to a good start as soon as possible, meeting his French colleague Le Drian in Rome on 3 June.

On 5 and 6 June it was the turn of the first “missions” outside the national borders, in Germany – according to the Istat first country in 2018 for the number of foreign tourists in Italy – and in Slovenia. The three meetings led to positive results, with the decision of the common reopening of the borders commented by Di Maio himself as a gesture of brotherhood, solidarity and collaboration.However, the most important appointment will be on Tuesday, June 9, when the Italian Foreign Minister will be in Greece following the controversy that broke out after the communication of a different treatment for those arriving from the Bel Paese.

In particular, from 15 to 30 June, Italian travelers from the regions considered “high risk” (Lombardy, Veneto, Piedmont and Emilia Romagna) will be tested and forced to a 7-day quarantine if negative, or 14 days if positive.

Austria
Another country of concern is Austria. The Foreign Minister Alexander Schallenberg, in fact, in recent days announced the reopening to seven of the eight neighboring countries. As reported in an interview on Corriere della Sera, however, the exclusion of Italy is not to be considered as “a final decision”, and possible is the choice to follow the Greek model, opening its borders to the province of Bolzano and other selected regions, but so far no such decision has been communicated.

The rest of Europe, on the other hand, is preparing for June 15 in a different way: if France and Switzerland will no longer impose any restrictions in a week, Norway will still be closed to Sweden but not to Finland and Denmark, which in turn will reopen its borders to all EU and Schengen countries only from June 31. From today, however, it will be possible to reach the United Kingdom, but on condition that they undergo a 14-day quarantine, from which, however, the citizens of the Isle of Man, the Channel Islands and Ireland are excluded. In the latter, too, self-isolation is still mandatory, as is currently the case in Portugal. However, the cautious behaviour of the various countries, and the different decisions, will have to be aligned at the end of the month, when – as communicated by the European Commissioner of Internal Affairs Ylva Johansson – the Schengen area will have to return to full functioning.

As far as Italy is concerned, if tourism wants to try to save at least part of the worst season ever, it must “make Italians passionate about Italy”.