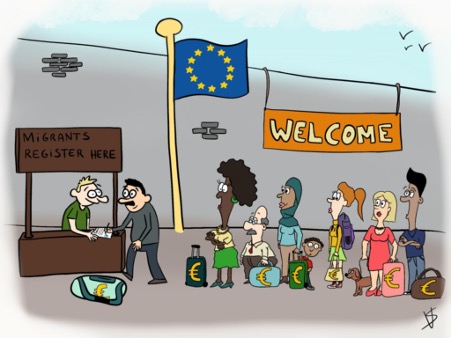 Migration, as soon as that word is mentioned, negative connotations popped into our minds. The media often “accidentally” omits the positive aspects of migration. “Migrants take all our money!”, we hear often. What if that’s not quite the case after all?

With the past migratory wave, the word migration has acquired a negative connotation. Countries closed their borders and refused to give additional immigrants a home. We don’t get it, because apparently without immigration, economic growth in wealthy countries risks being undermined by aging populations and labor shortages. In addition, poor countries’ economies depend in part on the money that migrant workers send home. Migration is not so negative after all!

We fact checked the claim: “The corona crisis has reduced migration flows worldwide. That has implications for prosperity. In rich countries, economic growth without immigration risks being undermined.” This is a claim from the German statistical bureau Destatis, published in Belgian newspaper De Standaard on 10 February 2021. It turned out to be mostly true. The claim is correct, but how come three journalism students didn’t know this? We thought the claim would be false, but research has left us bewildered. How is it that these positive aspects are not highlighted in the news? We were left with a handful of questions that gave us a different perspective on immigration.

No, immigration is not only negative and yes, all countries improve their economies with it.