Blog: At what cost, mister Farage? 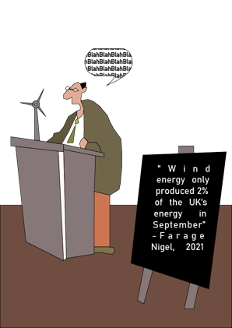 Our country is in tatters. A political system that allows self-serving opportunists, like yourself and a certain Boris Johnson, has been the downfall of our country. We are currently cut off from the rest of the world, with no routes to trade.

I remember when you exclaimed that by leaving the EU, 15 years ago, we’d be opening ourselves up to the rest of the world. Now we face supply chain crisis’ in almost every industry. People can’t drive to work due to a lack of fuel, people are going cold due to a lack of gas, and shop shelves are scarcely filled. There was a genuine appetite for change in the UK in 2016, a distrust in the political elite had been brewing for years, and you played on that distrust. At the time we needed politicians offering a plan to address the societal problems accelerated by neo liberalism, such as; the housing crisis, stagnating wages, a shrinking welfare system, and public services that are unfit for purpose. Instead, you fueled a campaign based on a hatred of immigrants, who by the way are the bedrock of so much that makes this country great.

Now our restaurants can’t hire staff, neither can our hospitals, because the subhuman immigrants as you inferred would rather work in another country. I am no fan of the EU myself; it has plenty of problems, yet I would have voted remain if I was old enough to do so.

And that’s because the type of Brexit you were offering, a hard Brexit, would almost certainly be disastrous. And I hate to say it but, I told you so. Yet I bet you still refuse to acknowledge the magnitude of your mistake, or even acknowledge it as a mistake at all. You probably see the demise of Great Britain as a success, because we did so in the name of sovereignty.

Sovereignty is important, and in the right hands can be a force for good, but when left in the hands of technocrats like yourself and the Tories, it only accelerates the rise of our current oligarchy. Ultimately the problem is bigger than you, Nigel. Westminster is wholly reliant on politicians acting like ‘good chaps’, yet is a cesspit of corrupted career politicians who act in no interest other than theirs, apart from the odd exception of course. I bet you are glad to have left that place, it can’t be good for one’s health.

Now you make a living from wishing people happy birthday on the app ‘cameo’. I’m not sure who pays £80 for these messages, either deluded fascists, or well-off people whose only intention is to make you say something stupid. Some audience you have there.

I can no longer pay my rent, inflation since 2020 has crippled workers like me for the past twenty years. I’m about to be evicted. My parents desperately need care in their old age. I’m unable to pay for private care, and of course we don’t have socialized care, that would be absurd.

Nigel, I don’t blame you entirely. To be honest I just needed someone to take my anger out on. And who better than you?