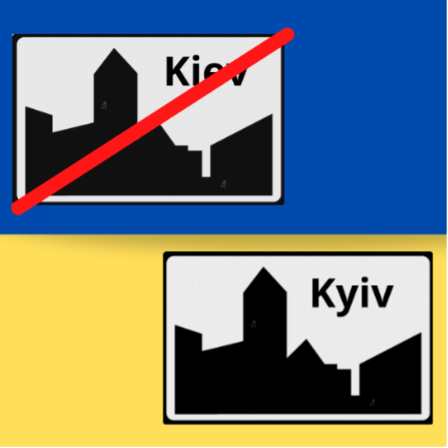 On the 31st of March 2022, Ukrainian president Volodymyr Zelensky, called via Twitter for the old spelling of Ukrainian cities to be abandoned. At the end of his tweet, the hashtag #KyivnotKiev followed. Many media outlets, including the Dutch De Volkskrant and The Washington Post, fulfilled his request, but the Belgian media didn’t take action.

#KyivnotKiev was not sent into the world on the 31st of March 2022. The hashtag has been trending regularly since 2018. Russia annexing Crimea in 2014 put Ukraine in the news. Even then, Ukrainians were calling on the international media to change their spelling. In 2018, the Ukrainian Foreign Minister came up with this hashtag. The aim of the campaign was to say a final goodbye to Ukrainian ties with the former Soviet Union. Not only did they want to see Kiev changed, but they also wanted to see all cities bearing the Russian name changed. Among others Lvov, Ternopol, Zhitomir should be changed to Lviv, Ternopil, Zhytomyr.

The English-language newspapers, including The Washington Post, BBC, The Guardian and Associated Press, definitively changed Kiev to Kyiv. With the start of the war between Russia and Ukraine, other media followed. Some Dutch newspapers, such as De Volkskrant, followed the example of the English-language media. Austria also adapted their language and called on other foreign press agencies to do the same.

Transformed into a Dutch word

The Flemish public broadcaster VRT currently sticks to Kiev. The other Flemish media also continue to use Kiev. Eastern Europe expert Jan Balliauw explains in an article on the news website (Dutch) of the public broadcaster, vrt.nws, why they continue to use Kiev. “It is a word that is influenced by time and different languages. The name has a link with Russian, but does not correspond to it one hundred per cent. In addition, it would also be a Russian form that is centuries old.” VRT chooses the linguistic aspect over the sensitivity that surrounds the name.

VRT language adviser, Geertje Slangen, says that the public broadcaster very consistently follows the advice of the Taalunie, an organisation to promote the Dutch language. “In the spelling of proper names and geographic names, we follow the advice of the Taalunie. Kiev (Kie-yef) is a clear form transformed into a Dutch word based on the transcription. In both Ukrainian and Russian it sounds more like ‘kie-jif’.” So the public broadcaster sticks to Kiev. “That is the Dutch name which in Ukrainian is called Kyiv. We also do not say Berlin instead of Berlijn“, concludes Slangen. When asked whether there was any discussion within the editorial staff about changing the name after the Russian invasion, Slangen does not have an answer. “That question has not come to me in any case”, she says.

Unfortunately, war is not a new phenomenon that came with the new year. There are already some precedents to which we can rely. Former Dutch correspondent in the Arab world, Joris Luyendijk, talks in his book Het zijn net mensen (They look just like humans) about the sensitivity of language. Apart from the discussion about Kiev or Kyiv, there is also a thin line between the word freedom fighter or terrorist. He himself experienced the following during his time as a correspondent. “The first problem when you want to be impartial is that there are no impartial words.” Luyendijk writes that there are so many different words, each with a meaning behind it. Whether you use occupied Palestine or Israel makes a big difference. “Words together form a perspective and there are so many words, so there are so many perspectives,” he says.

The start of the Russian invasion caused certain newspapers or media to change their use of language. Ganna Gnedkova is a literary translator originally from Kyiv who works as a journalist in Vienna. In an article in the Austrian newspaper Wiener Zeitung, she says that she is convinced that the English-speaking world responded much faster to the #KyivnotKiev campaign than the German-speaking world. Gnedkova emphasizes that language is political. According to her, Europe must support Ukraine. Step one is recognizing and adapting the language. “It is time that Europe recognizes Ukraine as a post-colonial state and supports it in its emancipation from the Russian empire and in shedding language-colonial rudiments”, she told Wiener Zeitung.

Some Belgians with Ukrainian relatives think that this discussion has taken too much prominence. Student Sander Lambrechts’ mother comes from Ukraine, his grandmother and aunt have fled Ukraine, but his uncle is still there. It doesn’t disturb Sander that the Belgian media distort certain names of cities to make it easier to understand in the Dutch language. He does think that more information should be given to keep Belgians informed of the situation. More important than the use of Kyiv or Kiev, he thinks, is information about refugee reception.

Lilianne V., who was born in Russia but has a lot of family in Ukraine, also thinks there should be other priorities. Her family had to flee the bombed Kharkiv (Kharkov). “My family’s world is upside down. They are tired and anxious. For us, there are really other priorities now than the language used in the Western media.”