Blog: Who spends the most on research in Europe? 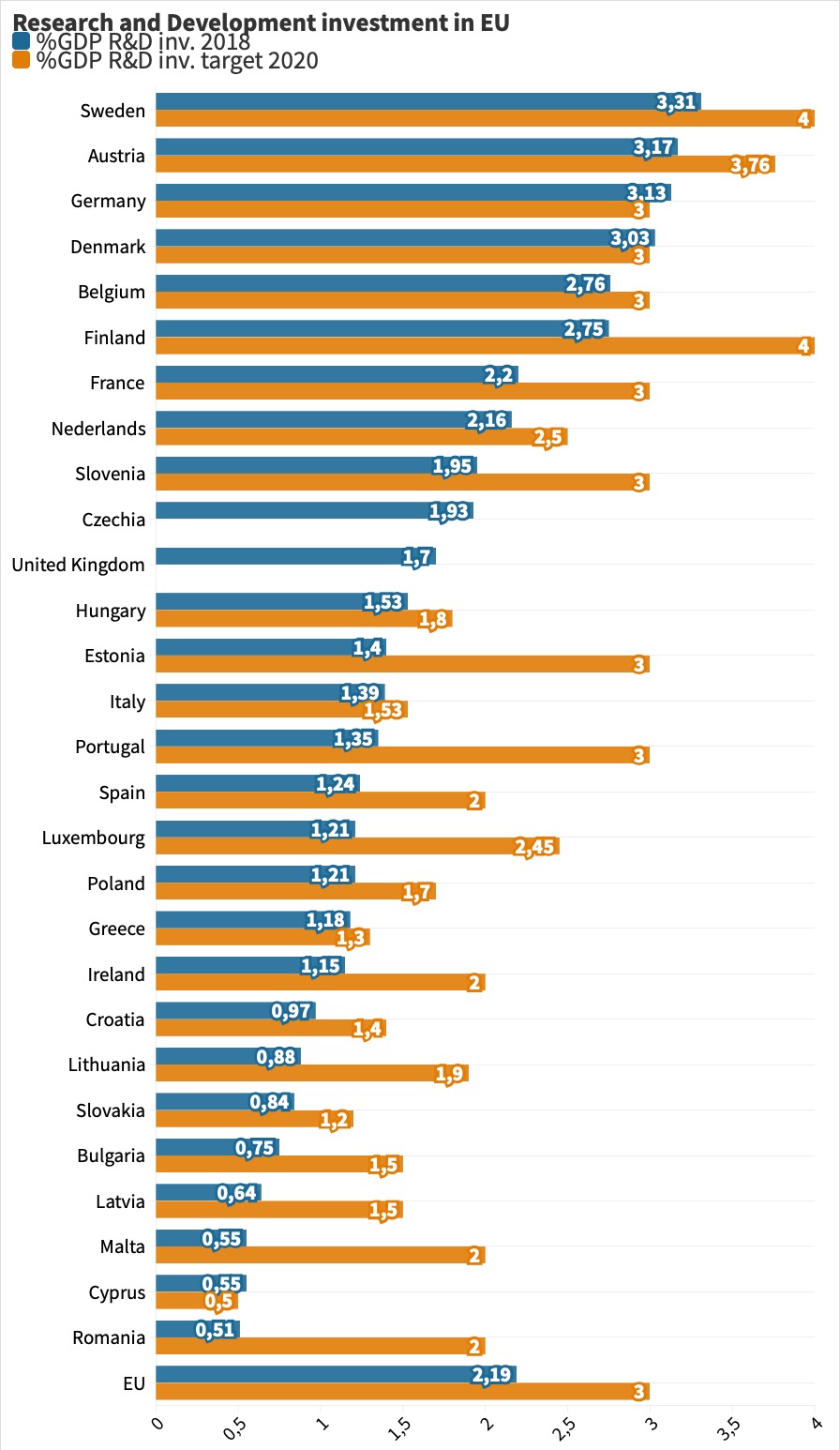 “We have only one enemy and it is the virus. Only research can overcome it with more and more cures and a vaccine”, the President of the Italian Republic Sergio Mattarella said on the 26th of October inaugurating “The Days of Research”, an initiative promoted by Airc (Italian Association for Cancer Research).

While Europe is facing the second wave of Covid-19 and some countries, such as France and Germany, are preparing for a new lockdown, the search for the vaccine continues. In the lead we find the pharmaceutical company AstraZeneca, which in collaboration with the university of Oxford and Irbm Pomezia seems to be the closest candidate to the production of a vaccine against Coronavirus. In particular, Oxford researchers are approaching the third stage which is the last step before the European Medicines Agency can give its consent. If this happens, then the green light will be given to the distribution of the first doses of the vaccine. About 2-3 million both in the UK and in Italy will be used for the vaccination of health professionals, the elderly and the patients with previous diseases.

But does the amount European states invest in research and development have any correlation to their influence in the discovery of a vaccine? We tried to find it out.

In 2010, the European Council, on a proposal from the Commission, adopts the Europe 2020 strategy. The idea of the strategy is to set some goals to be achieved during the decade. One of the main goals is the achievement of 3% of EU GDP spending on research and development. The indicator by which the innovation efforts of EU countries are measured is public and private spending on research and development, calculated as a percentage of gross domestic product.

The first column of the graph shows the investments in research and development of EU countries in 2018, including the UK, on GDP. Looking at the data, we can see that the EU has not reached their 3% target to date, reaching only 2.19%. Analyzing individual countries, it emerges that most of the states have not reached their national target. With three exceptions: Germany, Denmark and Cyprus. It should be remembered that the economic situation of each country determines the national targets. Romania has the lowest with 0.51%, having set its 2020 target at 2%.

From theory into practice: which European companies are competing in the research to the vaccine?

According to the WHO, more than 170 candidate vaccines are being developed around the world, 34 of which have begun clinical trials. These are the main companies and the countries they come from:

Instead, these are the 2018 R&D data of the five countries considered:

Of these, Sweden and Germany exceed both the EU share (2.19%) and its 2020 target (3%). The figure for France coincides with the EU share. Finally, the United Kingdom and Italy, currently partners and leading the way in vaccine testing, remain below the EU threshold.

Therefore, there seems to be, in most cases, a correlation between research and development data and vaccine research. In 60% of the cases examined, the companies that are competing to find a cure against Covid-19 have their headquarters in, or are connected with, some of the countries that have invested more in research and development in recent years. An important role can also be played by the national governments of these countries, which over the years have been stable on average. The country with the highest government continuity is Germany, which has retained Chancellor Angela Merkel for the past fifteen years. Italy, among the five countries taken into consideration, is the nation that in the last ten years has seen several Prime Ministers alternate, six over the course of three legislatures.