Blog: Why refugee women struggle to find employment in Germany 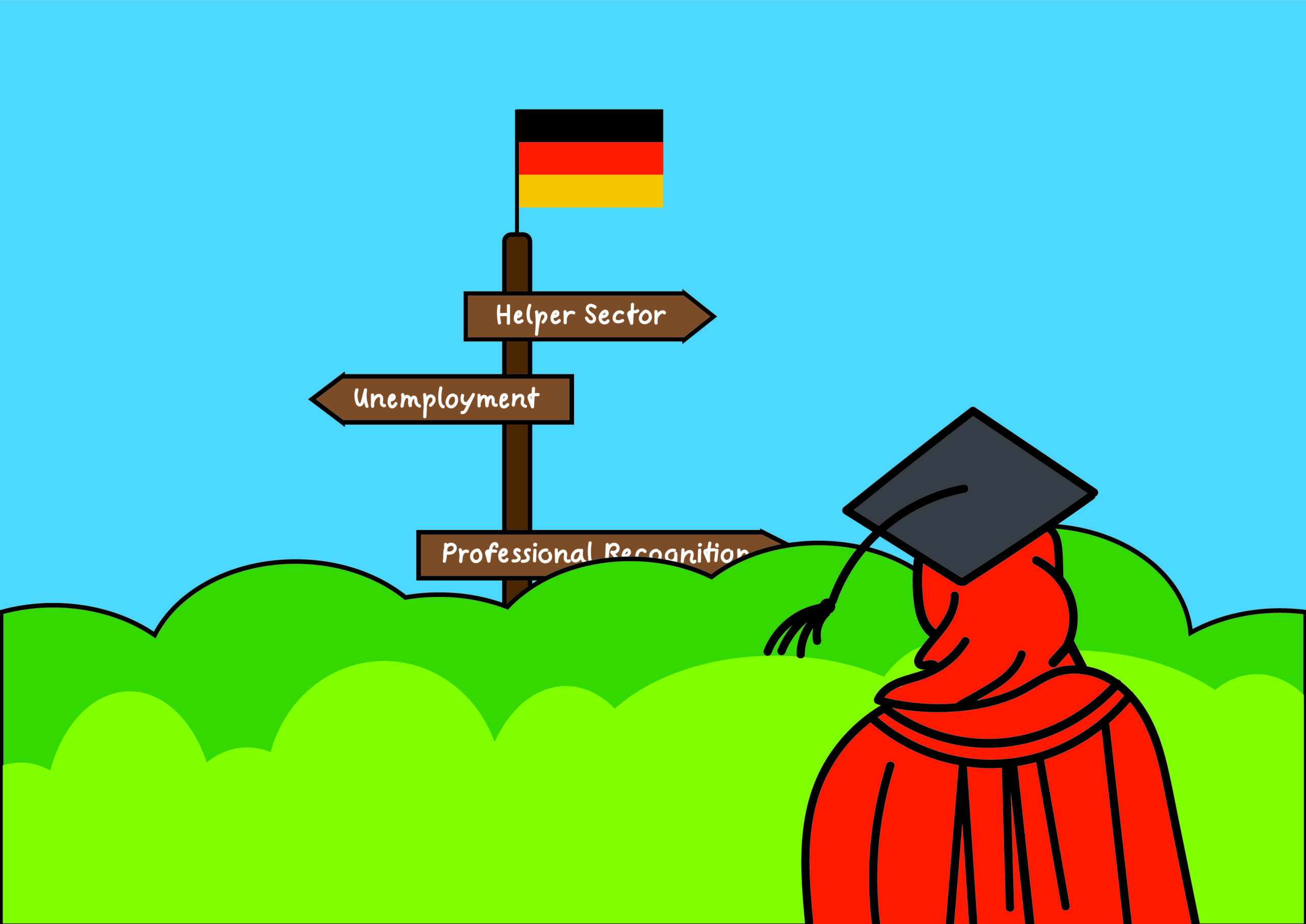 Women flee to Germany in search of better prospects. Once in Germany, a lot of them fall into unemployment, unlike many of their male counterparts. But why do refugee women find it so much harder to get a job than refugee men?

Female refugees in Germany are confronted with language barriers

The IAB research report from 2020 claims that the language barrier is among those reasons. In most instances men flee before their wives giving them more time to learn the German language. Furthermore, statistically speaking, only 32 percent of women take part in language courses, as opposed to 41 percent of men. Due to limited language skills, women lack access to information, which is often only available in German. According to the IAB short report of 2021, women who are singularly responsible for childcare and housework also wait longer before participating in language courses meaning they gain access to the labour market later.

Refugee woman in Germany are primarily in charge of care work

The IAB short report shows that 74 percent of women households have children which is the case for only 32 percent of men households. Especially children under the age of three years hinder parents from participating in the labour market. Nearly a third of refugee women are affected by this. Additionally, due to care work and language barriers, refugee women spend less time than men with Germans or people who have already lived in Germany for a long time. This prevents them from building a network and thus from meeting people that can help them find a job or look after their children.

Men are more likely to take advantage of Federal Employment Agency programmes and other counselling services than women, according to the IAB short report. By making use of counselling, refugees increase their chances of finding employment. The report of the Friedrich-Ebert-Foundation adds that women who do not take part in counselling and integration courses find it significantly harder to improve their German language skills. While refugees usually are obliged to attend an integration course, participation may be postponed due to pregnancy and the following birth. Ildikó Pallmann, social scientist and author of the study “Refugee women as a target group of labour market promotion” notes that many women instead turn to social media to find information, however that the institutions in charge of facilitating the integration process are not present enough there.

According to the IAB research report, one fifth of refugee women had already started or completed an apprenticeship or a degree course before arriving in Germany. Recognition of this work experience often fails however because the German authorities regularly do not refer women to the responsible recognition bodies or even inform them about their possibilities regarding the recognition of their work experience. Hence only 25 percent of women’s and 37 percent of men’s education qualifications are recognised in Germany.

Pallmann says: “Often, integration specialists only care about getting people into the labour market quickly.” Pallmann is hopeful though, this is going to change in the future as she claims that a rethinking has taken place in the jobcentres over recent times. Yet, some refugee women still report, that they are being discouraged by the staff of job centres to have their qualifications recognised as the staff members according to the refugees either tell them that their respective qualifications are not needed or that it is highly unlikely that the recognition process will be successful.

As a result, refugee women are often placed in the auxiliary sector in Germany instead of continuing to work in their old profession. Contributing to this is the fact that according to the IAB short report before coming to Germany many women worked in professions that require country-specific knowledge and skills, most of which are highly regulated in Germany. The professional recognition process is described as a long and time-consuming process in a study in which Pallmann took part.

Female refugees in Germany and their false perception

In addition to the above-mentioned reasons for the low employment rate, Pallmann highlights one other contributing factor: “One of the main reasons is the lack of awareness of women, that employers do not view them as a target group.” Consequently, women are not targeted, thus stay away from counselling and therefore are unable to improve their language skills making it hard for them to find a good job. Pallmann adds: “It is a big problem that women are often perceived as unqualified, with many children and without any professional experience, because there are also many women with a lot of professional experience who are highly qualified.”

But what can be done about the low employment rate of refugee women? “You (the institutions responsible for the integration of refugees) have to be present where the women are. You must be active in the respective groups (on social media). For this, you need multilingual staff, because you do not get very far with German in an Arabic-speaking group”, says Pallmann. The IAB short report also makes clear that more investment needs to be made in women’s access to language and integration courses if women are to succeed in entering the labour market. Access to childcare facilities should also be made easier and men should be encouraged to support their wives regarding childcare.

Finally, Pallmann demands: “Even if women are initially placed in the auxiliary sector, women must still be shown the prospect that later down the line they can have their professional experience recognised and continue to work in their old profession.”