Media analysis: Brexit aftermath through the lens of leading newspapers in Spain, France and the United Kingdom 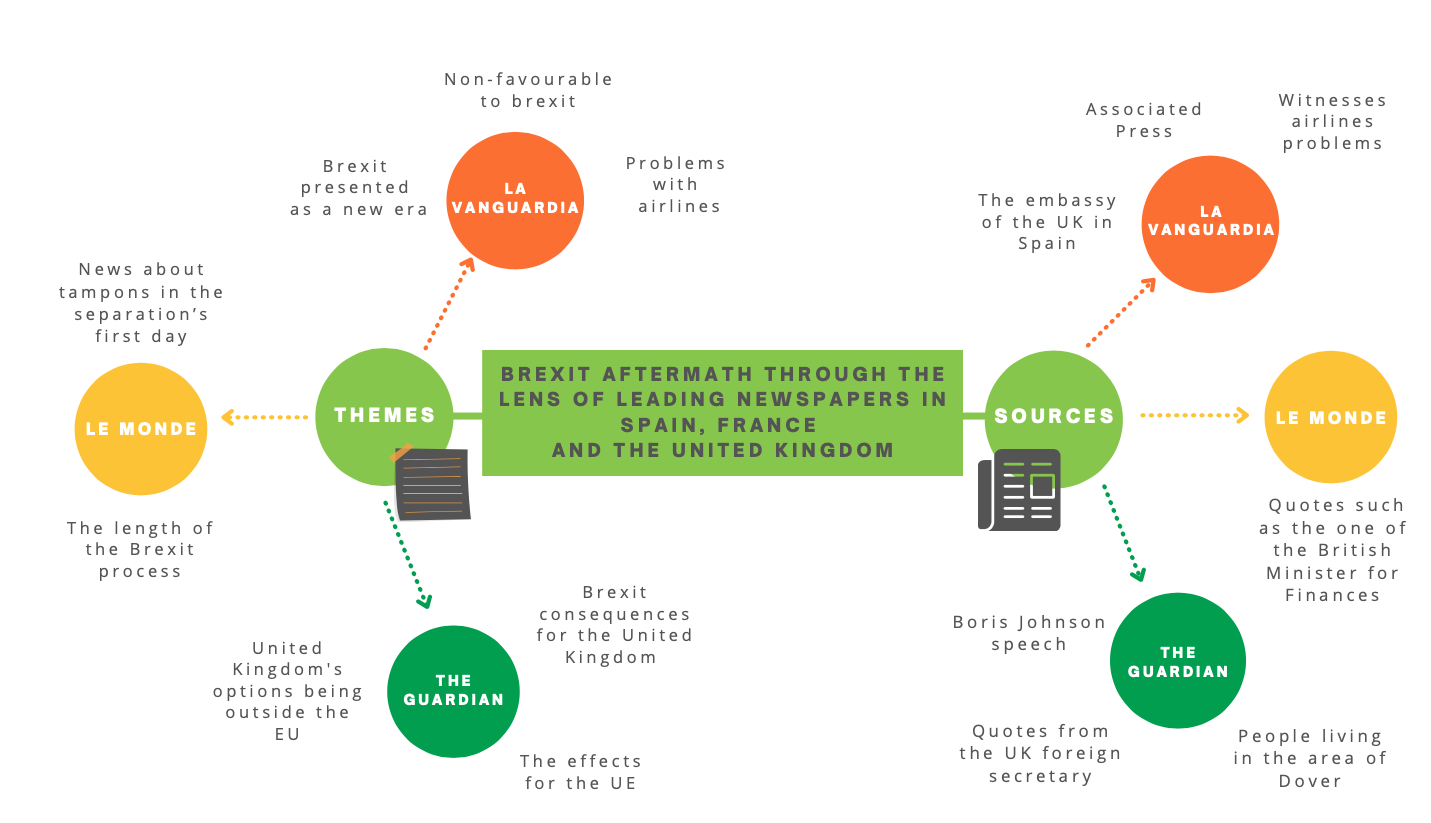 Brexit became a reality at the end of 31st December 2020. Depending on the media, perspectives about this event have been different. In this media analysis, we have thoroughly examined nine articles from three leading newspapers in three countries: La Vanguardia (Spain), Le Monde (France) and The Guardian (United Kingdom).

These three newspapers were chosen because they are prominent institutions in their respective media systems and, consequently, they can represent the climate of opinion of these European countries. Regarding the analysis sample, we have examined news reports and comment articles published between 31st December 2020 and 3rd January 2021, as those can shed light on the media positions regarding the future of the European Union and the United Kingdom in the Brexit immediate aftermath. To scrutinize the comprehensiveness and the quality of the information provided by those newspapers, the coverage has been compared and contrasted with the major codes of ethics of the profession, promoted by the UNESCO, the International Federation of Journalists (IFJ), the Council of Europe and the Catalan Journalists’ College. The editorial codes and guidelines issued by Le Monde and The Guardian have also been considered.

In the case of La Vanguardia, the European Union is almost presented as a “victim” because of the United Kingdom. In the opinion article: “Brexit: a new era”, the newspaper highlights that “eurosceptic elites […] encourage the theory that Europe was a slab for innovation and for the English mercantile spirit”, which indicates that the outlet is non-favourable to Brexit. La Vanguardia accepts that the “EU is not a perfect organisation”, but contends that “Boris Johnson and the eurosceptics have preferred to convert the divorce with the UK to a cultural war”. In “Brexit leaves in land the British who return back to Spain”, La Vanguardia critically mentions that airlines denied boarding to travellers with papers in order, even if some days ago the same papers were accepted by the same airlines.

The principle II of the International Principles of Professional Ethics in Journalism by UNESCO stresses “the journalist’s dedication to objective reality”, which means that journalists cannot cause distortions of the information exposed. In a similar vein, the first article of the Global Charter of Ethics for Journalists highlights that journalists must show “respect for the facts and for the right of the public to truth”. Those prescriptions are not totally respected in the aforementioned articles due to a lack of impartiality.

In the journalistic analysis “L’accord sur le Brexit n’est que le début de longues négociations avec le Royaume-Uni”, Le Monde exposes the length of the Brexit process. Using comparisons like “receding tectonic plates” and expressions like “the most logical thing is to cooperate”, the newspaper gives its opinion about the future of the EU. Being more distant than La Vanguardia but respecting both positions, Le Monde presents its critical position towards Brexit: “This separation, the Europeans saw it as a tear and for a long time believed that it would not take place”, as highlighted in an article about Covid-19 and Scotland. Devoting the first news article on the 1st of January 2021 to tax exemption on tampons might seem anecdotal, but this topic is actually relevant to understand the immediate effects of Brexit. In “Suppression de la TVA sur les tampons hygiéniques au Royaume-Uni après le Brexit”, Le Monde explains that the government of the UK decision is possible after achieving the separation of the EU, which means the British are not obliged to apply the minimum VAT of 5% in the hygienic products imposed by the EU.

The articles of Le Monde respect principles number five and six of the Resolution 1003 on the Ethics of Journalism from the Council of Europe, which exposes that journalists “must ensure that opinions are expressed honestly and ethically” and that “opinions taking the form of comments on events or actions relating to individuals or institutions should not attempt to deny or conceal the reality of the facts or data”.

In general terms, The Guardian is very critical of Brexit. Concerning the future of the European Union, the British newspaper presents Brexit as “a loss of great importance”. This viewpoint is clearly expressed in the article “Brexit trade deal places Europe back at centre of UK politics”. This article delves into how the EU will be affected by the exit of the UK, stressing that “the British experiment will play into European domestic debates for many years to come”. However, at the same time, Brexit is also presented as a kind of “relief” or something “tolerable by events”, as the article asks how worst would have been the Covid-19 pandemic and the EU recovery fund with the UK as a member state. The article also develops the headline. It is said that, far from taking the UK and EU relationship out of the internal political debate, it will be very present because of Northern Ireland’s election whether to stay in the EU’s single market and also due to the Scottish independence issue. Another article published by The Guardian, headlined “Dover eerily quiet on Brexit eve, but hauliers fear more chaos”, places the focus on EU trade at a time when the Brexit transition ended. In this article, journalists summarize all the problems that lorry drivers could face when passing Dover and the Eurotunnel.

According to Appendix 3.1 of The Guardian’s Editorial Code, “the press, whilst free to be partisan, must distinguish clearly between comment, conjecture and fact”. This principle, related to the accuracy of the newspaper, is clearly respected in the articles examined, as there is no confusion between news and journalists’ viewpoints.

As we have previously commented, La Vanguardia presents Brexit from a negative perspective. In this article, the outlet stresses that “the  United Kingdom has been incapable of accepting a relationship between equals with the other European countries”, insisting on the negative consequences that the country will face, such as losing Erasmus scholarships. According to La Vanguardia, other negative impacts of Brexit include major problems with air transportation, as noted in the article “Brexit leaves in land the British who return back to Spain”. Arguably, such impacts were not that problematic, given that according to the news piece, only nine people were affected. This approach raised questions about whether La Vanguardia informed “precisely and accurately”, as required by the first principle of the Catalan Journalists’ College code of ethics.

Le Monde’s position towards the UK is more neutral. This stance does not prevent the newspaper from exposing Boris Johnson’s difficulties once Brexit has been started. According to the French newspaper, difficulties that the UK faces do not only include the disunion with the EU but also the Covid-19 crisis and the relationship with Scotland. “Mr Johnson won the bet to complete his divorce from the EU”, affirms Le Monde, visibly showing its opinion. Despite this, overall, Le Monde journalists respect the main principles outlined in Le Monde‘s Stylebook (2002), including the need to “be careful not to express their own opinions too ostensibly.”

The Guardian considers Brexit as an error, taking into consideration its negative consequences for the future of the United Kingdom. In its article “Brexit: in crisis, without fanfare, UK finally ends the EU era”, The Guardian criticizes Prime Minister Boris Johnson for ignoring Brexit in his new year message. In addition, the outlet uses expressions like “hospitals warning of a calamitous winter coronavirus crisis” or “individuals and businesses […] face a dizzying new array of red tape” to evidence that many problems are still not solved. In the same vein, in the aforementioned article “Brexit trade deal places Europe back at the centre of UK politics”, the process is described as a “deception”, even for those who voted in favour. The newspaper exposes all the options that the UK has now that it is outside the EU, such as its capacity “to diverge from EU environmental, social and labour regulatory standards” and to “close its waters to European fishing fleets”. However, the outlet says that these demands “will again rub up against their economic consequences”. To sum up, Brexit is described as an additional obstacle for the nation rather than a benefit. By reflecting on the lights and shadows of Brexit, The Guardian obeys the article 21 of the Resolution 1003 on the Ethics of Journalism from the Council of Europe, which indicates that “journalism should not alter truthful, impartial information or honest opinions.”

During the examined days, the three newspapers employed a limited range of sources to build up their Brexit coverage. La Vanguardia uses different primary sources in the articles published on the 3rd of January 2021, including Patricia Moody and Sam Dankin (both affected by the cancellation of British flights) and the embassy of the UK in Spain. Those sources are complemented with information from Associated Press. In contrast, there are no sources in the opinion article published on the 1st of January 2021. Only two tweets (one of Boris Johnson and the other of the UK House of Commons) are quoted in an article issued on the 31st of December 2020.

Finally, The Guardian’s article published on the 31st of December 2020 uses Johnson’s speech as its main source while considering other sources such as the UK foreign secretary or Spain’s foreign minister. The article on the lorry drivers is built through the quotes issued by Rod McKenzie, policy director at the Road Haulage Association (RHA) and people living in the area of Dover. Conversely, the article about UK politics and the EU does not use any primary source.

According to the articles examined, we have noticed that the three newspapers have different opinions regarding the future of the European Union and the United Kingdom. Those different positions clearly stem from the newspapers’ particular ideologies and editorial lines. News and comments given by each outlet are highly influenced by where this newspaper is published. All of them have tried to offer the most interesting information to their readers, taking into consideration the political situation of their respective countries and their relationship to the United Kingdom. The range of sources employed is scant, as analysis and opinion are prioritized. Beyond our three-day research, future analysis encompassing longer periods must shed light on how European newspapers make sense of the ongoing challenges caused by Brexit.

Media Analysis: What international media write about specific statements made in the documentary “Francesco”
December 18, 2020