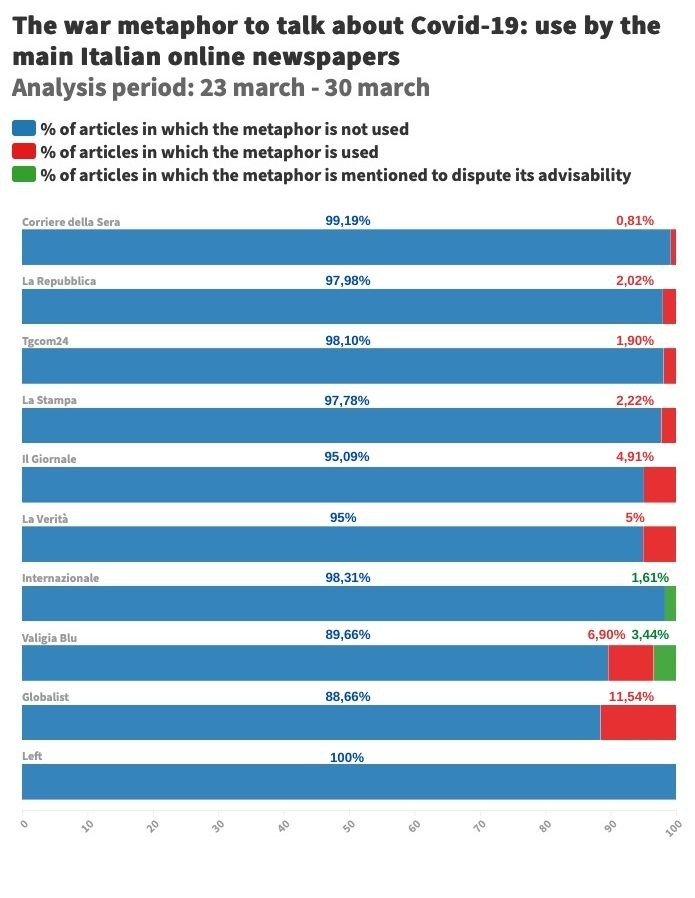 The Coronavirus (COVID-19) has spread very quickly in Italy. From February 21st, when the first case was diagnosed in Codogno (Lodi, Lombardy), more than 143.000 people have suffered from the virus and more than 18.000 have died throughout the country. Scientists calculated the infectiousness rate through the so called R0 factor- which indicates the number of people one Covid ill could hypothetically infect- and found out that the rate was higher than the World Health Organization had predicted (R0 was expected to be from 1,4 to 2,5). As a matter of fact, from February 21st to March 9th 2020, R0 rate in Italy was 2,85, which means one infected person could infect up to 3 other people.

There is an elephant in the room of journalism, and it is the comparison occurring between the Covid-19 pandemic and the war. The outrageous number of deaths, the high-impact images spread by the media, the speed of the contagion and the presence of an invisible enemy that has to be destroyed led to a pervasive military rhetoric.

According to our investigation, from March 23rd to March 30th, some of the most notable online Italian newspapers (Corriere della Sera, La Repubblica, La Stampa, Tgcom24, Il Giornale, La Verità, Valigia Blu, Globalist and Internazionale) headlined 99 articles evoking war metaphors. A remarkable title is the one from La Verità, published on March 23rd «Pandemic is like war, but a total lockdown isn’t possible».

The metaphor has been used both by journalists and politicians, creating a debate on its convenience. Some consider that using war-related terms might prevent people from fully understanding what is happening right now. The communication expert Annamaria Testa writes on Internazionale how and why consequences could be severe. The more a phenomenon is framed, the more difficult it will be to focus on its complexity.

The more a phenomenon is framed, the more difficult it will be to focus on its complexity.

As for the Coronavirus emergency, this approach is inefficient and dangerous. The war is shaped through the dichotomy of “good” and “evil”, reflecting the idea of an enemy that needs to be fought. It is the concept of “all against all” battle that fails the attitude that is now required to overcome the crisis.

Considering doctors and nurses as if they were soldiers on the frontlines and referring to the pandemic as necessary pain and sacrifice means to set aside the idea of prevention, waiting for the worst case scenario to happen and justifying the rise of those strong reactions that might lead to risky and totalitarian behaviors. As a matter of fact, in an article from Corriere della Sera published on March 30th, the headline says «Coronavirus, a married couple of surgeons fighting in the same trench» and Il Giornale underlines the difficulties faced by pharmacists as well «Us, pharmacists are living in a trench»

On the other hand, no opinions were found to be strongly in favor of the war-metaphor. All the titles that contain the idea of fighting a common enemy are just references to experts and politicians’ statements.

Fighting with nothing but slings

The term battle recurs, for example, in the words of Guido Bertolaso, ex chief of the Italian Civil Protection department, reported in the titles of La Repubblica and of Tgcom24 (both published on March 24th) «Coronavirus, Bertolaso “I’m positive to the test, I’ll win my battle”». Il Corriere della Sera published on March 26th what the former president of ECB Mario Draghi wrote on Financial Times («We face a war against coronavirus and must mobilize accordingly»). This is also the case of Tgcom24, which mentioned former Italian prime minister Silvio Berlusconi («During war times the country should stand by the ones who decide») and the Sicilian governor Nello Musumeci («The actions taken in Sicily are useless. We are fighting with nothing but slings»).

More evidences can be found in La Repubblica («Coronavirus, Atalanta football team president Percassi: “Bergamo city should resist during what is shaping as a new War World” ») and in Il Giornale («The psychologist Maura Levi: “The war can provide less pain than the current situation”»).

It is clear that neither politicians nor journalists are approaching this emergency in a common way. Some newspapers explain the reasons why war related terms should not be used, but no thesis was so far addressed to support positive effects of a military communication.