False: “Gender violence is a big lie. […] it’s like denying day or night”.

Javier Ortega-Smith, the Secretary-General of the Spanish far-right-wing party, Vox called gender violence a ‘big lie’ after the celebration of the new judicial year in the Community of Madrid, in September 9th of 2019. There was a significant emphasis on gender violence  in that celebration and this made him state that ‘violence is violence and  has no sex’. “Don’t focus on violence against women,” he said. “The statistics do not favour the fight against the violence on women”. 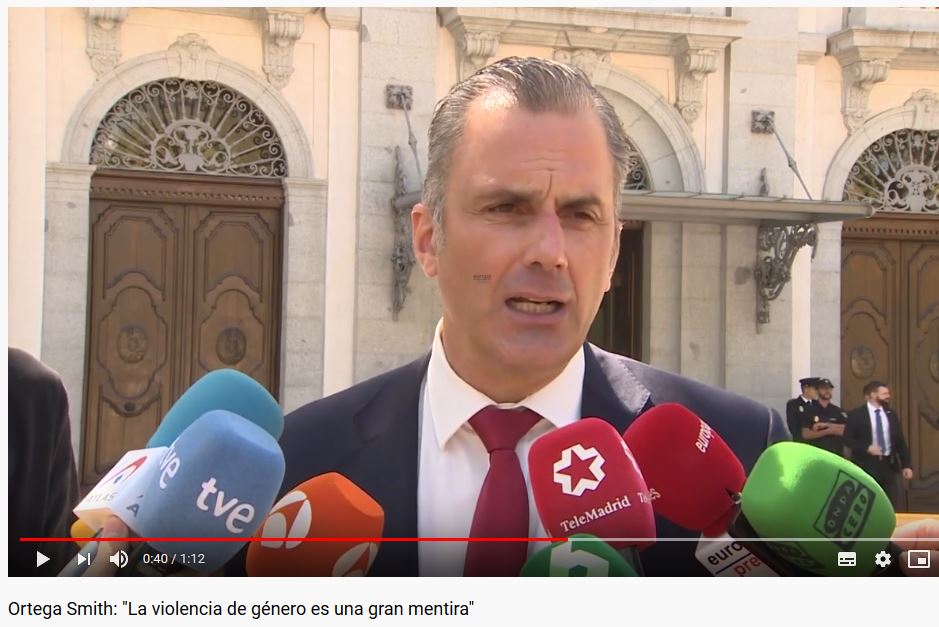 Gender or domestic violence, or both?

First of all, it has to be clear that there is a gap between ‘gender violence’ and ‘domestic violence’: “Sometimes, the concept of gender violence is not well defined and is confused with that of domestic violence or plain violence, so that the fight against it may be less effective than intended” (Gimeno Reinoso, B. & Barrientos Silva, V. 2009:1).
In the thesis called “Postraumatic Stress Disorder in Women Victims of Domestic Violence: Evaluation of Intervention Programs” made by Paulina Paz Rincón González, says that there have been two big varieties in the study of gender violence:

“On the one hand, there is the perspective of family violence, as its name indicates, it focuses on different forms of violence that can occur between the members of a family. On the other hand, there is the feminist perspective, whose object of study is the perpetrated violence against women by the abusive man (Johnson, 1995)” (Rincón González, P. (2003). Post Traumatic Stress Disorder in Women Victims of Domestic Violence: Evaluation of Intervention Programs. Madrid: Complutense University of Madrid).

Professor of Anthropology and Director of the Law and Society Program at New York University, Sally Engle Merry, makes a difference between violence and gender violence in her book Human Rights and Gender Violence: Translating International Law into Local Justice (2006),

Firstly, she says that gender violence is not a new problem. This type of violence exists in all societies all over the world. The thing is that it became a bigger social issue thirteen years ago. Indeed, gender violence was defined as a human rights violation in the 90s. And nowadays, it is considered as the center of women’s human rights.

The professor of Anthropology claims that despite its near universality around the globe, local manifestations of gender violence are highly variable. In women’s case, the violence against them in the home is shaped by patterns of marriage and the availability of divorce, by conceptions of male authority and female submission. “Gender violence is embedded in enduring patterns of kinship and marriage, but it can be exacerbated by very contemporary political and economic tensions. In recent years, increasing economic inequalities, warfare, nationalism and insecurity have increased rates of gender violence” (Engle Merry, S. 2006).

The Ministry of Health, Social services and Equality of the Spanish government made a paper announcement, in which they describe what gender violence is. It is claimed that gender violence is one of the clearests protests against inequality, subjection and the power of men over women. This kind of violence is based and put it into practice by the subjective difference between both sexes.

The Spanish Ministry of Interior is making statistics about gender violence. This statistic indeed claims that gender violence exists by showing the amount of victims it causes in each Spanish autonomous community. According to the ministry of interior, 594.580 is the total number of victims of gender violence in Spain until the 31st of may 2020. The government states that women suffer from violence because they are women. And the victims are women of any social stratum, educational level, culture or economy.

Indeed, the Spanish government describes gender violence as that which is exerted on women by the ones who are or have been linked to them by affective relationships (couples or ex-couples). The aggressor’s objective is to cause damage and gain control over the woman, so it occurs continuously over time and systematically in the form, as part of the same strategy.

In the article called Violencia de género versus Violencia doméstica: la importancia de la especifidad, Spanish politician Beatriz Gimeno Reinoso and writer Violeta Barrientos Silva claim that the concept of ‘gender violence’ is not well defined and it is often mixed up with domestic violence, or violence itself. Because of this, the fight against gender violence may become less effective. “One thing is to fight against domestic violence and prepare protocols and help resources for the victims of that type of violence (partners of the same sex, under age users, elderly people, susceptible people)… but another thing is to recognise that this kind of violence is different from that which helps as the patriarchy’s tool of control over women, by recognising that the entire society is structured over such organization.” (Gimeno Reinoso, B. & Barrientos Silva, V. 2009:12,13).

Violence affect some more than others

Ortega-Smith says that women are not the only ones who suffer from violence. He explains that men, children and elderly people are also victims of violence, so that is why people should not only focus on women.

Despite that claim, professor of anthropology Engle Merry explains that women are the most affected ones in terms of gender violence: “Although women are disproportionately the victims of gender violence, in many situations men are also victimized”. (…) “Violence between intimate partners includes women’s attacks on men as well as men’s on women, although women are more likely to be injured” (Engle Merry, S. 2006).

Moreover, she says that an analysis that recognizes the effects of the larger social context on gender performances has to be done in order to understand gender violence. When men abuse women in intimate relationships, violence is used by them to define their own gendered identities. Engle Merry explains that a batterer often wants to show the woman that he has the control, or to prove to other men that he controls her. “He may view the violence as discipline that the woman deserves or has provoked. Perhaps she failed to take care of the house or has dressed provocatively and awakened his suspicions and jealousy. Men often use violence to establish power hierarchies, both against other men and through raping other men’s wives. This form of gender violence is a fundamental strategy of war as well” (Engle Merry, S. 2006).

According to some statistics made by the World Healthcare Organization (WHO), one out of three women suffers from physical or sexual violence, inflicted by her partner in some moment of her life. Indeed, the WHO affirms that violence against women is a generalized phenomenon and happens in every country. The thing is that the prevalence changes inside of each country. But the studies made in different countries prove that the percentage of women from 15 to 49 years old who have suffered from physical or sexual violence from her partner is placed between 15% and 71%. Until now, the WHO has not talked about violence against men as an issue. 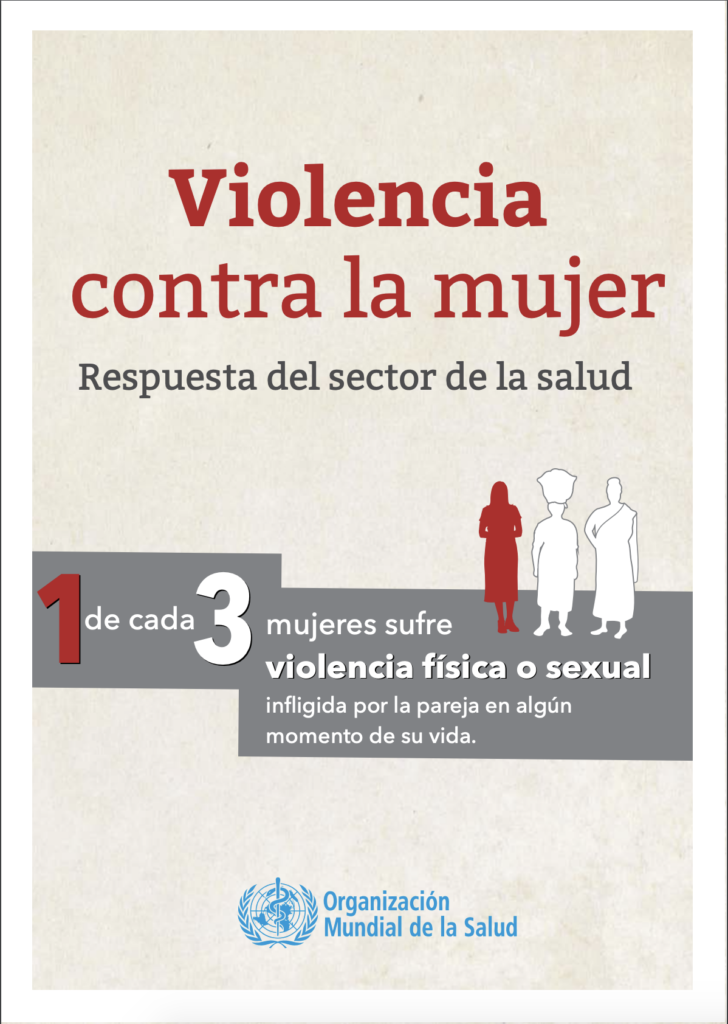 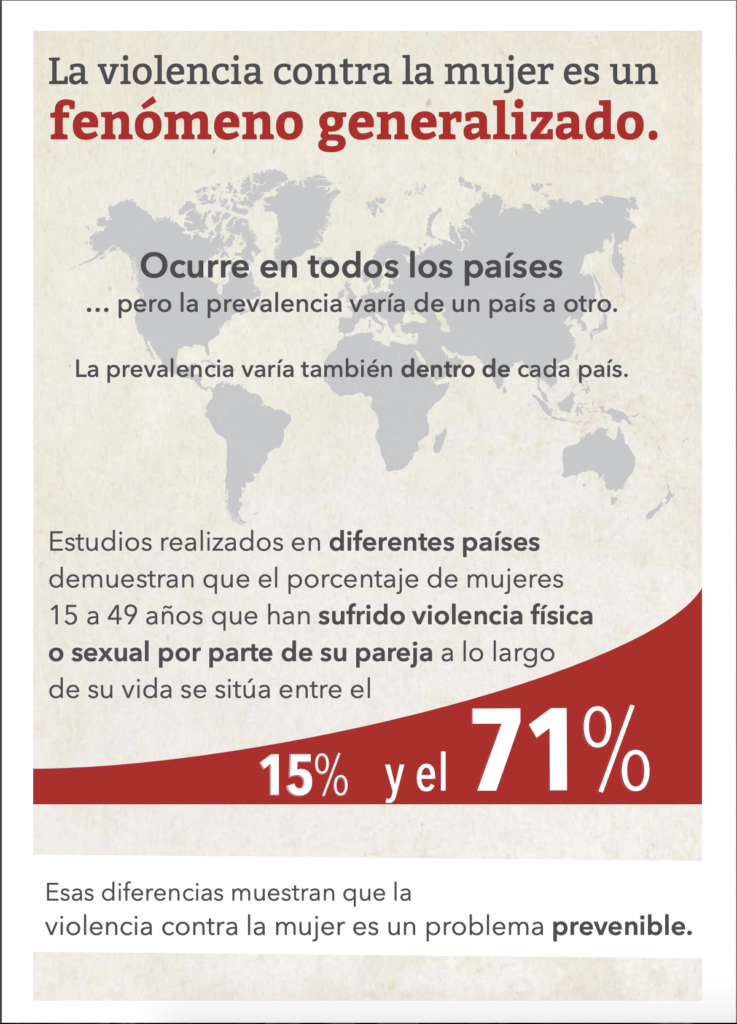 In the document elaborated by the Consultant of the Women Unity and Development of ECLAC (Economic Comission for Latin America and the Caribbean) Nieves Rico, it is stated that gender violence means the violence that reflects the existent asimmetry in the power relations between men and women. And it also perpetuates the subordination and decaluation of the femenine in the presence of masculinity. “This is characterized by responding to patriarchy as a symbolic system that determines a set of concrete daily practices, which deny the rights of women and reproduce the existing imbalance and inequality between the sexes. The difference between this type of violence and other forms of aggression and coercion is that in this case the risk or vulnerability factor is the mere fact of being a woman.” (Rico, N. 1996:8).

In the press release of the statistic of gender violence and domestic violence made by the INE (Spanish National Institute of Statistics) on 19 may 2020, it can be seen that women have been the most affected ones by domestic and gender violence between years 2015 and 2019. 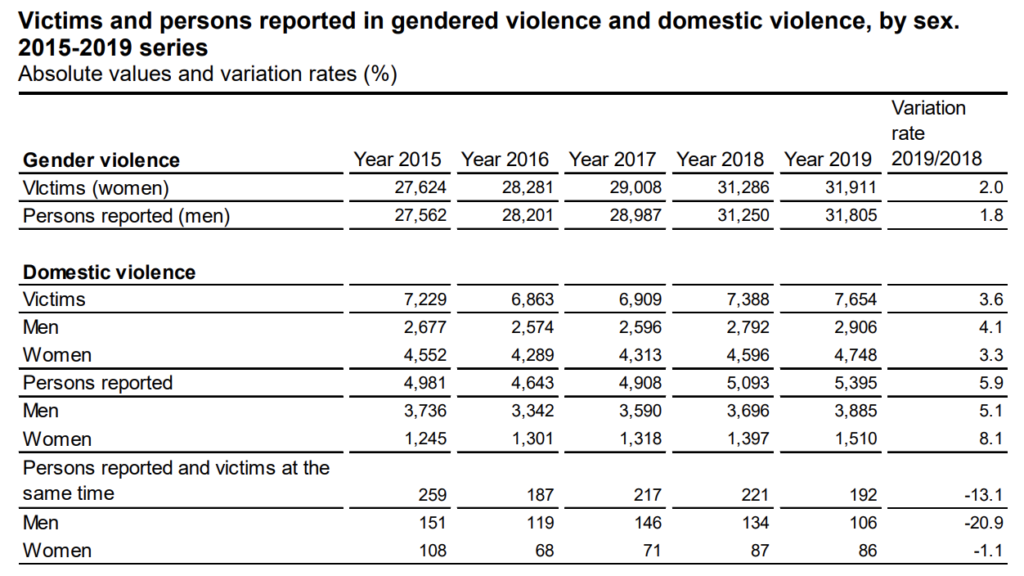 As it can be seen in the statistic, there are much more women than men who have suffered from domestic violence. Moreover, the INE does not even mention the number of men who have been victims of gender violence. Indeed, this is the definiton of gender violence stated by the INE: “Gender Violence is understood as any physical or psychological act of violence (including attacks on sexual freedom, threats, coercion or arbitrary deprivation of freedom) carried out against a woman by a man who is or has been her spouse, or who is or has been linked to her by a similar sentimental relationship, even if without cohabitation.” (INE, 2020:2).

Is it getting any better?

Also, the previous statistic says that the number of mortal victims increased between 2018 and 2019. Indeed, in 2018 there were less victims than in 2019 according to the statistic made by the observatory of violence, a project by Fundación Mujeres (Women Foundation). They are a non-government organization and non-profit body that is working since 1994, with the aim of achieving equality between women and men. 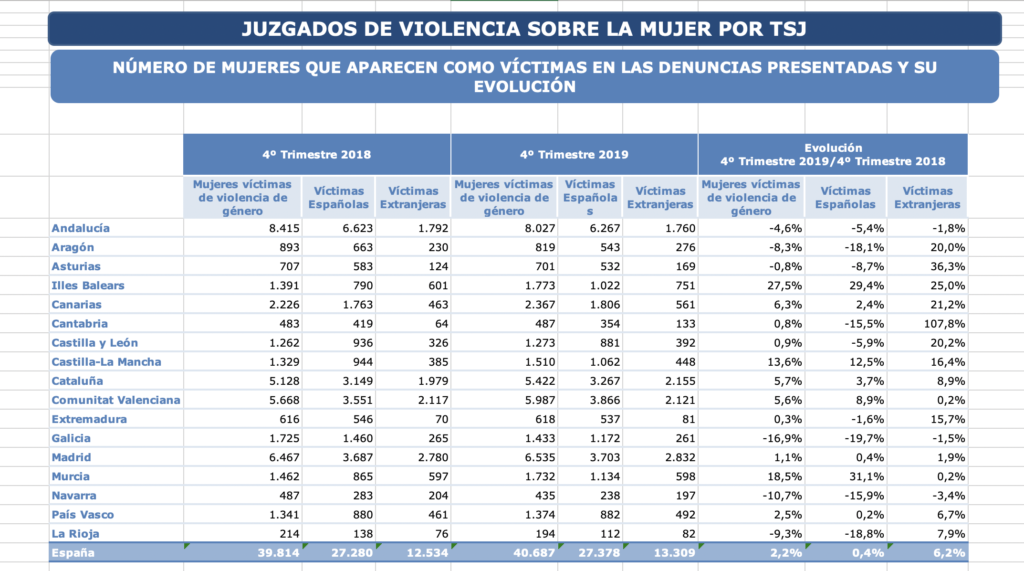 In this statistic, they analyze the number of victims caused by gender violence in each autonomous community in Spain, in the fourth trimester of 2018 and 2019. And indeed, there has been an increase of 2,2%.

The three statements made by Javier Ortega-Smith are false. As it can be seen, there are experts and governamental statistics which proof that gender violence exists and is indeed a problem. Women are the ones who suffer the most, and the statistics say that the issue is getting worse again after years of decrease (at least in Spain).

As Engle Merry says, gender violence happens all over the world, and there are some patterns in a relationship between two people that define it. Nowadays, it is considered to be an attempt to women’s human rights, according to the World Healthcare Organization.
In addition, as experts and statistics have said or proved, there is a gap between domestic and gender violence. And if gender violence would not exist, there would not be statistics to prove how many women die every year because of domestic violence.

So the statement made by Ortega-Smith that “Gender violence is a big lie” is proven false by all the above presented evidence.