Blog: Different views on the “biggest consumer of powder cocaine in Europe”. 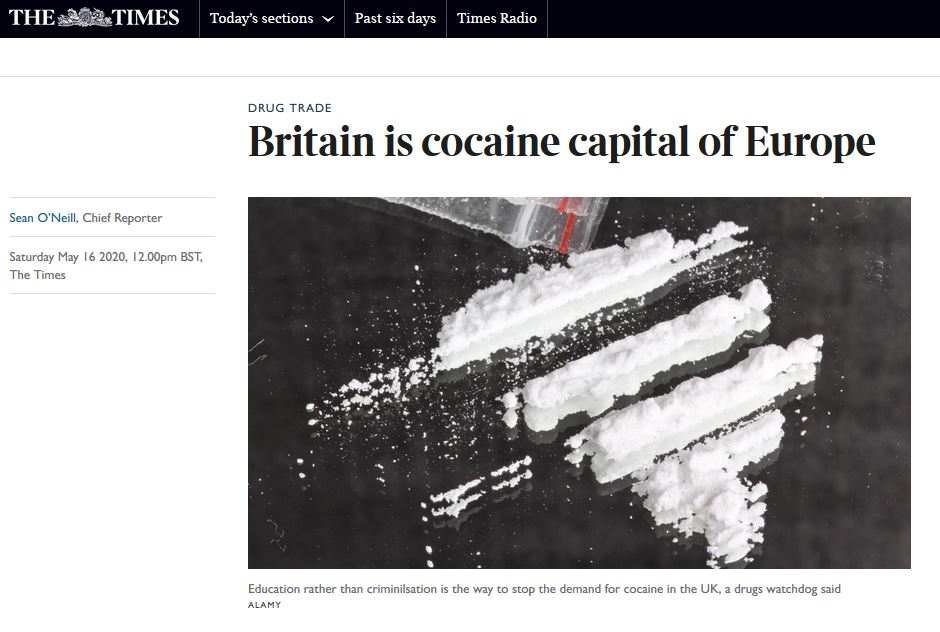 On 18 May 2020, the influential British music and events magazine Mixmag published an online article on its website explaining that Lawrence Gibbons, president of the NCA’s Drugs Department, had named the United Kingdom and London – the country’s capital – as the biggest consumer of cocaine in all of Europe. Mixmag regularly reports on drugs and presents ‘lists’ on drug use.
Gibbons made his statement to The Times, two days earlier. His statement can be questioned because other sources give the first place in this ranking to the Spanish city of Barcelona.

What’s the problem?
On 18 May 2020, the music magazine “Mixmag” published a short article, refering to a previous publication in The Times, stating that Lawrence Gibbons named the United Kingdom as “the European capital of cocaine”, as London and the United Kingdom are the places where most cocaine is consumed throughout Europe. To corroborate this, Gibbons told The Times that the amount of cocaine consumed in the northern European country had increased by 300 percent in the decade from 2010 to 2020. Technically, the amount of “Class A” consumed had risen from 30 tons in 2011 to 117 tons in 2019. “In the 1980s it was seen as a middle-class drug, a commodity for bankers and professionals. That’s no longer the case, it doesn’t distinguish any more,” said the NCA’s head of drugs department to The Times.

It is curious to notice that, in the Mixmag-article, they quote a study by King’s College of London in which presumable is explained that London, Bristol, Zurich, Barcelona and Antwerp are the 5 cities in Europe where most cocaine is consumed. Mixmag however links Bristol to a previous Mixmag article in 2019 naming Bristol as number one, based on a report by the European Monitoring Centre for Drugs and Drug Addiction. A survey in which London was not included. Mixmag however doesn’t link to the presumably more recent King’s College research.

The origin: starting point of incomplete information
The King’s College research refers to the Global Drug Survey. The doctor and scientist from King’s College of London, Adam Winstock, carries out the “Global Drug Survey” together with other scientists from the same institution. The objective of this research was to discover the increase in the level of cocaine consumption in the United Kingdom, with a special emphasis on London. According to Mixmag, based on the Times article, Lawrence Gibbons obtained the information from this study and he deduced it to “The United Kingdom and London are the European capitals of cocaine”. Other studies however show a different outcome and point at Barcelona.
Lawrence Gibbons supported his claim by stating that of all the cocaine shipments arriving in Europe (foremost in Spain, Belgium and the Netherlands), a significant part is destined for the United Kingdom. “Direct drug shipments to the UK may not bring large quantities, but a large percentage of the tons consumed come from within Europe,” Gibbons explained through internal investigations conducted by the NCA itself. Gibbons in this statement relates cocaine-use to transport, explaining that more cocaine reaches the UK than can be presumed from direct shipments.

Other studies show a different outcome.
The journal “Addiction“, in collaboration with 5 of the most important universities in Europe (Amsterdam, Berlin, Paris, Barcelona and Prague) and numerous researchers from the Spanish National Research Council, published the study “Spatio-temporal assessment of illicit drug use at large scale: evidence from 7 years of international wastewater monitoring“, directed by the scientific researcher and professor at the University of Salamanca Iria González-Mariño.
In this study, research was carried out from 2011 until the summer of 2019, in which wastewater from 120 cities in 37 different European countries was measured for two consecutive weeks in March or April, 24 hours a day. In addition to this measurement of drug residues in urine, other complementary measurement tools were added, which made the study more complete and precise, than the Global Drug Survey.

The result of this research is that the city of Barcelona is the European city where most cocaine was consumed in these 8 years. During the first three years of the study, the cities where most cocaine consumption was detected were London, Amsterdam and Zurich, but from 2014, there was a radical change in the trend and Barcelona was the leader in this ranking for the next five years. Barcelona consumed 281-331 mg/1000 people per day in the period 2011-2013, but from 2014 until last summer, its consumption increased to 330-373 mg/1000 people per day.

The study in the journal “Addiction” was very intense and precise when collecting the data, so that, being a very complete study, it allowed the discovery of new trends. One of them, for example, is the differences in current consumption trends in Europe between the northern and central European countries, compared to the countries of southern Europe. In Sweden, The Netherlands, Belgium or Norway, amphetamine use is more common, while in the United Kingdom, Italy, France, Portugal and Spain, cocaine is the most commonly used drug.

Gibbon´s information wasn´t interirely wrong but incomplete
However, the survey published in the journal “Addiction” is more complete and offers much more comprehensive and contrasted information, the study by King’s College of London is neither wrong or incorrect, it is just limited. Lawrence Gibbons makes an incorrect statement, because he only consulted a single source of information. The study carried out by Iria González-Mariño shows a broader and more recent picture of cocaine use in Europe. Statements like these are easily quoted by media, especially media that like to publish lists.

CONCLUSION
Mixmag made a quick and easy headline, quoting the NCA-head from a Times-article. Lawrence Gibbons didn´t make a wrong claim, he made an incomplete one, as he only based his statement on one survey. The United Kingdom – and its capital, London – are not the biggest consumers of cocaine in all of Europe, a more elaborate study claims that Barcelona comes first. London, however, does show up in the top-3, so there is some ground for the claim.