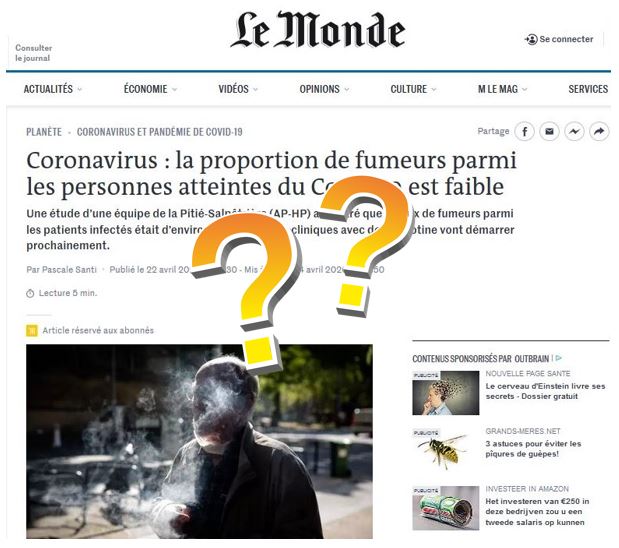 Since the beginning of the corona virus crisis many theories on how to stop, slow down or cure the virus have emerged. Last month there were more than 60,000 cases in France and some studies on some patients has made a lot of noise especially in the press.
The debate was opened in France following massive publications in newspapers with titles such as “Smokers less affected by Covid-19“, “Coronavirus: smokers better protected?” or “The proportion of smokers among those affected by Covid-19 is low”.

Many people are indeed enthusiastic about the issue, we can read for example sentences such as « The numbers are surprising » (in Le Monde), “the numbers are indeed striking” (in Le Figaro science), “fantastic data” (tweet by Prof. Bertrand Dautzenberg tobaccologist, former lung specialist Sorbonne University and APHP Pitié Salpêtrière), “..this finding could suggest that tobacco, on the contrary, forms a barrier against infections.” (in LCI). 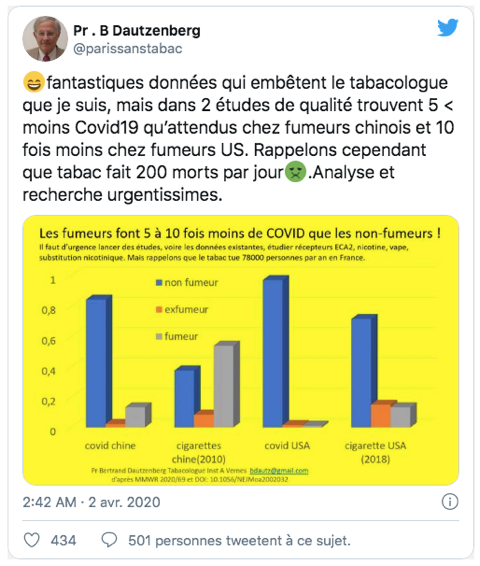 Translation: Fantastic data that annoys the tobacconist that I am, but in 2 quality studies find 5 times less Covid19 than expected in Chinese smokers and 10 times less in US smokers. Let us recall however that tobacco causes 200 deaths per day. Analyses and urgent research. (Tweet by Prof. Bertrand Dautzenberg)

Yet reading the articles we can see that nobody really takes positions because we do not yet know what the situation is. The presumption that “smoking would protect against Covid19” is caused by two studies: 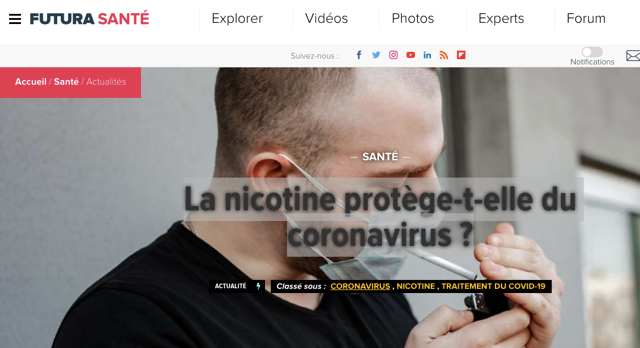 In addition, although it is specified in all the press that smoking is harmful and remains the greatest cause of avoidable death in the world, the presentation of these studies as a “great discovery” is already influencing the mind as something positive. Finally in every article the so-called scientist journalist explains how “nicotine could prevent the SARS-CoV-2 from attaching and entering cells, thus limiting its spread. » (Santé Magazine).

These studies may be interesting, but it is still far too early to draw any conclusions and get this kind of news in the newspapers. Researchers from Inserm (Institut national de la santé et de la recherche médicale) have looked more closely at these studies, which are circulating in all the newspapers, to put things in context. They point out that “Although these questions are the subject of many press articles, the link between the disease and smoking is far from clear”.

A closer look at the studies

The argument that smoking is not a risk factor for developing a severe form of Covid-19, and may even have protective properties, is based primarily on studies (One example among others: this analysis comprising 13 studies conducted on hospitalized patients in China was particularly well publicized.)  that show a particularly low rate of smoking in resuscitation patients with Covid-19. However, in order to make sense of these studies, the groups must be well defined, and this is not always the case at the moment, especially in these studies that have been widely reported in the press. Indeed the results of the studies are weakened by the absence of a clear definition, well controlled and homogeneous from one publication to another on what defines a “smoker”. At what point in time does one enter into this category? What about former smokers? Moreover, this lower prevalence of smoking among intensive care patients must be analyzed in light of other factors, particularly according to the age of the patients. For example, among the elderly, smokers tend to be less numerous than smokers in the general population. However, most patients hospitalized for severe forms of Covid-19 are elderly, mainly males. Therefore, it is difficult to conclude from this low proportion of smokers in the intensive care unit that smoking could confer protection against the disease to the general population.

On the contrary, other studies have shown that smoking may be associated with a higher risk of developing a serious form of the disease. Thus, the study published in the New England Journal of Medicine on Chinese hospitalized patients, the percentage of smokers and former smokers was higher among severe cases of Covid-19 (17% and 5% respectively) than among non-severe cases (12% and 1% respectively). Furthermore, when looking at a severity criterion that combines intensive care management, assisted ventilation, or death, the percentage of smokers in this category is 25.8%, compared to only 11.8% among those without this severity criterion. While again, work is needed to better control for the definitions used, these results indicate that the association between smoking and Covid-19 is not so simple to untangle. It should be noted that the figures concerning smoking are moreover given in this study in a table without being commented on or discussed by the authors themselves.

Taking into account all these factors Alliance Against Tobacco concluded that, there is no evidence that smokers are any more protected than the rest of the population against the coronavirus.  On the contrary, they are more likely to be affected by a severe form of the disease. The current low number of smokers in the intensive care unit is probably related to the fact that smoking decreases with age. But most of all, epidemiological data do not support the hypothesis of a protective effect of nicotine.

Finally, it is by taking up a famous sentence of the French humorist Coluche, that Étienne Klein, a renowned physicist and head of the ‘Laboratoire de recherche sur les sciences de la matière’ recalled an important thing: “Let’s stop confusing correlation and causality (…) Confusing correlation and causality leads to Coluche”, he said. “Never go to the hospital. We die ten times more there than at home.”