Mostly true: Berlusconi: “Under my governments, Italy reached the lowest tax to Gdp ratio in the last 20 years (39%)”

On May 21st, during a political talk show on Italian television, Silvio Berlusconi said that, under his governments, Italy reached the lowest tax to Gdp ratio in the last 20 years, getting to 39%. This is mostly true.

Did Berlusconi’s work really get to minimize this parameter? It must be pointed out that it’s hard to associate a certain tax burden to a government or another. Indeed, some political decisions have a delayed effect.

In this case, taking into consideration each Italian government in charge from 1999 to 2019, the claim turns out to be true: under Berlusconi’s second government, in 2005, Italy reached the 39% rate. Something that you couldn’t find until 2005 neither from 2006 until 2019. However, what Forza Italia’s leader stated is relatively true because – even if the lowest tax to Gdp ratio has to be considered his own achievement – it didn’t last for the whole period when Berlusconi was in charge. 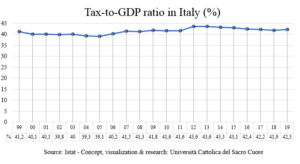