On January 23, during an Italian talk show, Luigi Di Maio (deputy prime minister and minister of Labour and Social Policies) declared that, according to a report by Istituto Cattaneo, the cabinet led by Giuseppe Conte is the most popular in Europe. Actually, this is not precise.

The report Lo strano caso del consenso al governo Conte (The strange case of Conte cabinet’s consensus) based on ParlGov and Polls of Polls  data, analyzes the consent of both majority and opposition forces of League and 5 Star Movement. The report shows how the government, despite the overwhelming consensus, is not the most popular among all the European countries. At the first place we find Malta’s executive guided by Joseph Muscat, Italian government is at the second place. Malta’s government in fact surpassed the 60% (55,1% in march 2013, + 5%) of liking among its citiziens.

The infographic shows that from the establishing day to the present Conte’s government had the greatest consensus gain, in comparison with the other EU cabinets (from 50,1% of March to 58, 5% of September 2018, +8,4%), but it’s not the most appreciated. 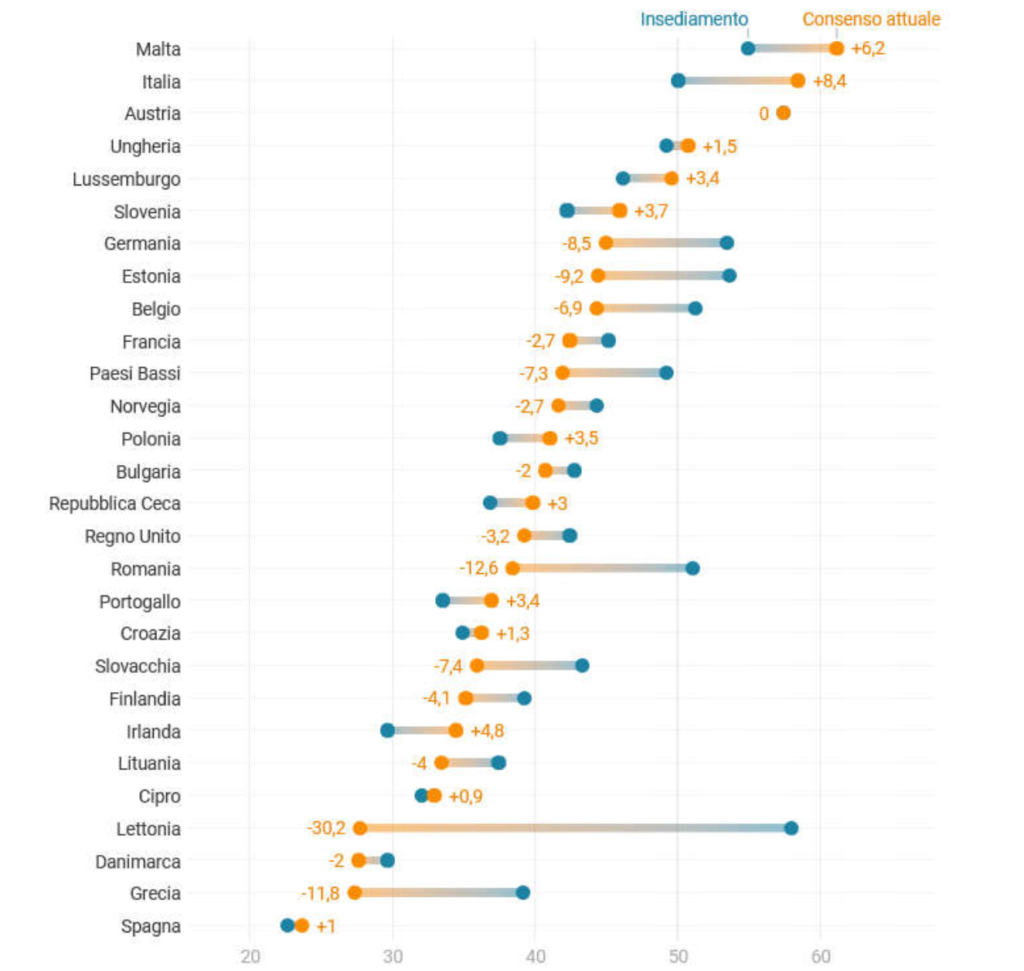 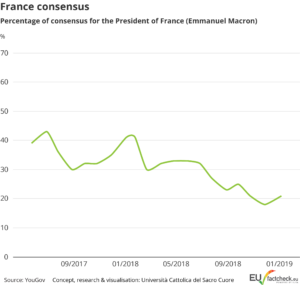 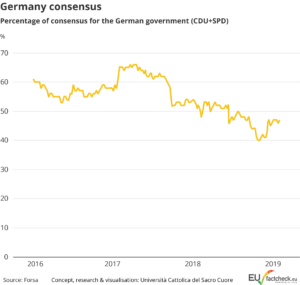 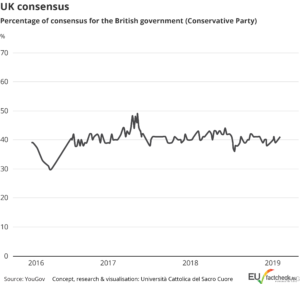 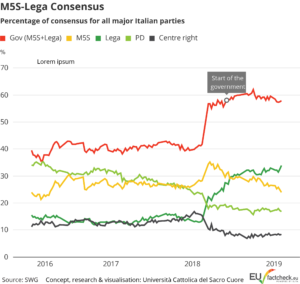 The data provided by Poll of Polls, based on surveys directed from eight institutes (Quorum, Technè, SWG, Euromedia Research, Piepoli, EMG, Index Research, Demos&Pi), confirm the increase of consensus for Conte cabinet, which was on the verge of 60% (+8,4%) between October and November 2018, while it seems it’s dealing with a decrease in last three months, probably due to the disagreement amongst M5S and Lega, regarding the Budget Act.

Instead, regarding the Democratic Party, since March 4th elections, the analysis shows an ostensible stability, with a consensus standard at 18% (-1%), without any decrease and no relevant increases. Slightly different is the trend for the Right-Centre parties, such as Forza Italia, which lost about 3 points in the polls, extimated now between 7,9% (-6,1%), according to Index, and 11,9% (-3,1%), according with Technè. The drop of consent for Silvio Berlusconi’s party, seems to be the result of the rise of Salvini’s new Lega. Between the end of 2018 and the beginning of 2019, Forza Italia touched the lowest rate in its consensus, barely reaching 9% (-5%). At the opposite, Salvini’s Lega became the first Italian party, reaching 32% (+15%). On the other hand, the rise of M5s suddenly stopped after the party started ruling the country. Currently, Di Maio’s party can rely on around 25% of the votes: -8% of the votes obtained at the beginning of March 2018 and far less of Salvini’s estimated percentage. 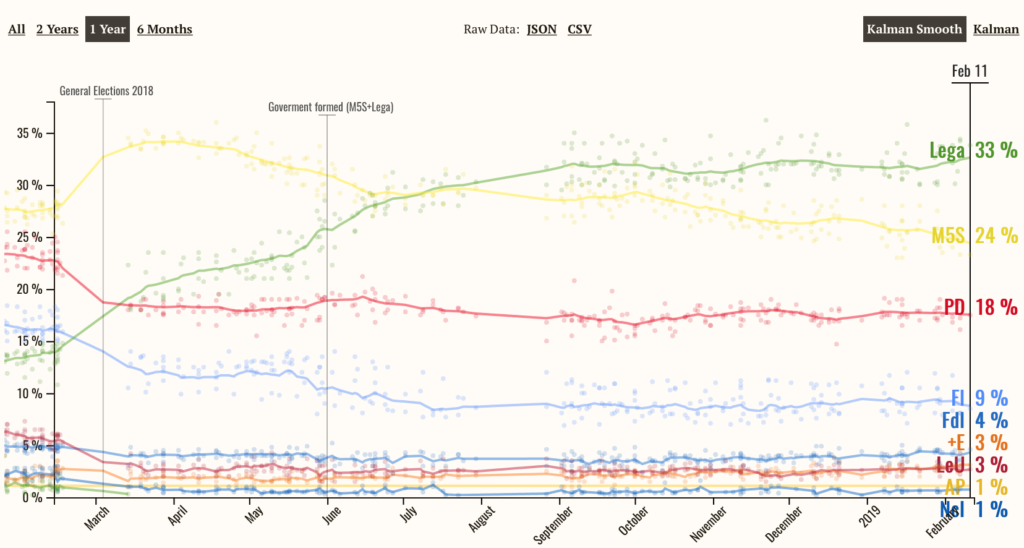 Consensus of Lega and M5S from March 4 to today

From the polls clearly emerges the gap between the two parties of the cabinet. According to the surveys carried out by SWG, from the date of the settlement, Salvini’s Lega has doubled its percentage of voters. At the elections of March 4th, Lega obtained 17.35%, while on 28th January 2019 it’s extimated at 32.6% (+ 15.25%). Its major increases were recorded after the local and regional elections (April 22nd and June 10th), won by the centre-right, and during the hardest European debates about migration issues (August 25th and January 28th).

Meanwhile, M5S has collapsed, falling from the 32,68% of the elections to the 24,9% (-7,78%) of January 28th. After an initial growth which lead to 35,2% on March 23th (+2,6%), Beppe Grillo’s Movement progressively lost its consensus, especially in the months following the agreement with Lega. The trend inverted only when the Parliament abolished life pensions for the mPs (July 12th) and when the basic income was introduced (September 27th). 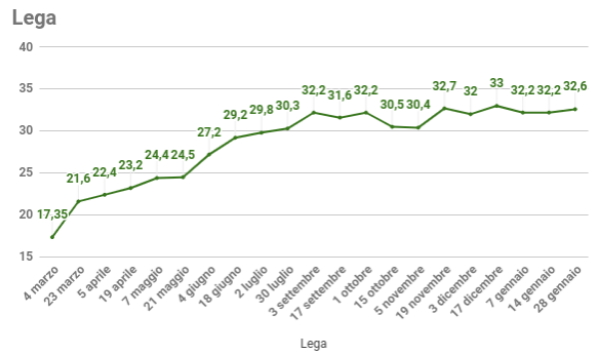 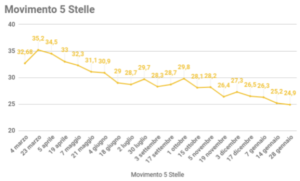 The rise of nationalist movements: Europe vs Italy

The rise of the nationalist parties in Europe keeps going. As the latest polls by Pollofpolls.eu show, an alliance between the three major nationalist groups could be the second strongest group inside the European Parliament. If Europe of Nation and  Freedom (ENF), European Conservatives and Reformists (ECR) and Europe for Freedom and Direct Democracy (EFDD) will reach an agreement, the european sovereignist wing could surpass 150 seats in the Parliament and rank just behind the European People’s Party (EPP) – which counts 178 seats – and just above the Progressive Alliance of Socialist and Democrats (S&D) – estimated around 135 seats. It seems pretty clear that the next European elections, from the 23rd to the 26th of may 2019, won’t be a fight between Socialists and the People’s party. The new nationalist and euroskeptic political forces, different from the old traditional parties, will play an important role as well. Looking more deeply at the data, it can be seen that there are significant consensus differences among single sovereignist parties. Looking at the data, one can notice the various trends of nationalists in different countries. In France, Marine Le Pen’s National Rally has come over president Emmanuel Macron’s En Marche!, and it’s estimated as the first party with 22%. In Hungary, Viktor Orban’s Fidesz has the absolute majority of the votes (52%). Great result also for Austrian FPÖ (22%), which, anyway, still ranks behind socialist and populars. Less important are the numbers of nationalist parties in Germany (Alternative für Deutschland at 13%) and Spain (Vox at 11%). Italians live in a unique situation: Salvini’s Lega, as seen, is by far the first party (32%), but the other euroskeptic force, the 5 star Movement, is losing consensus (25%, -8% from the election day). 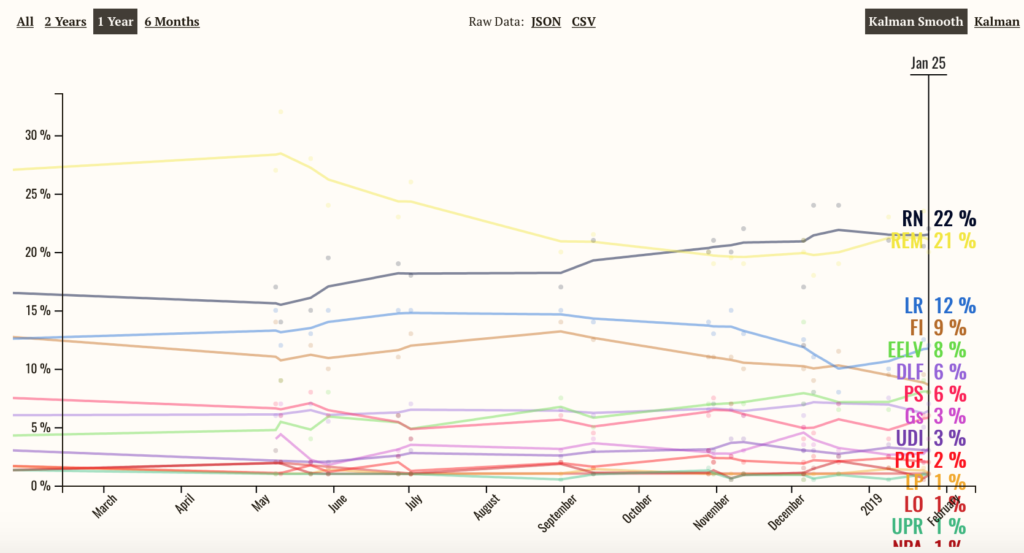 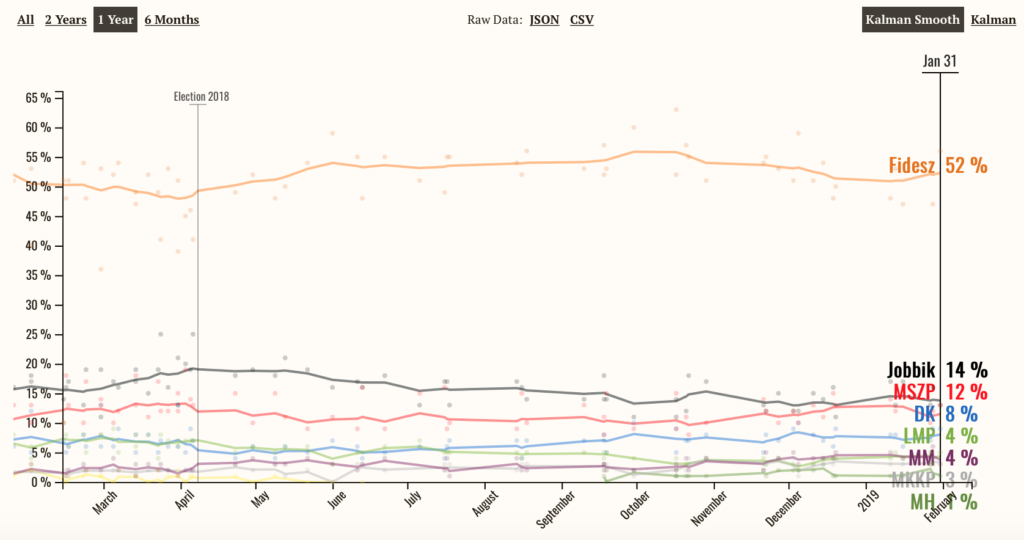 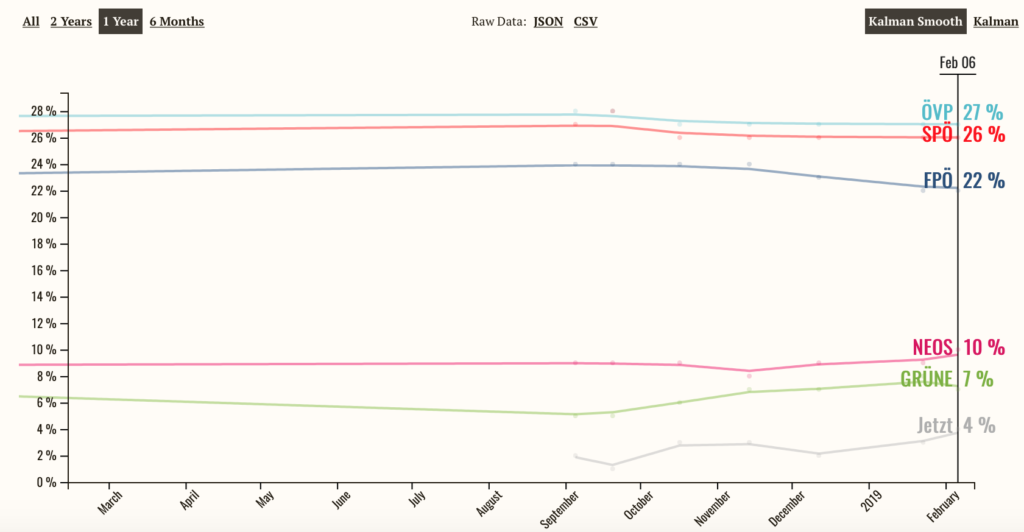 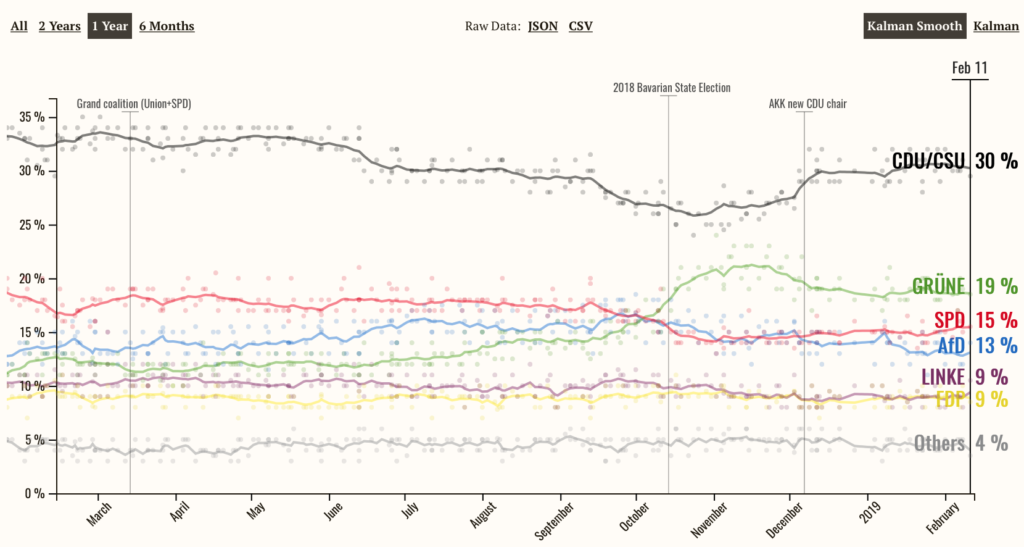 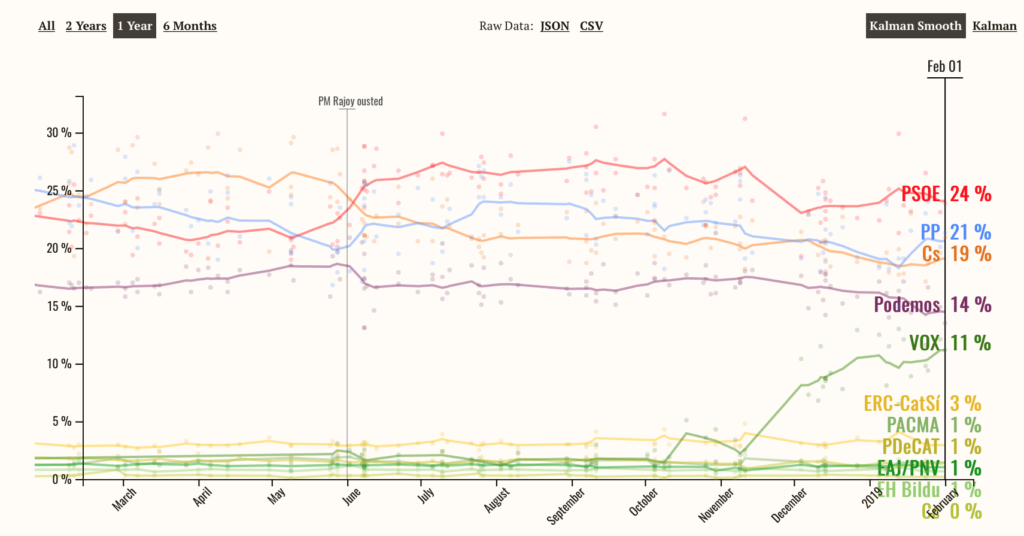