“This crisis affects women differently than men”. This claim by Dutch politician, writer and former diplomat Petra Stienen who was elected in June 2015 as a member of the Senate of the Netherlands representing social-liberal party D66 is mostly true.

On May 2, 2020 the Dutch newspaper De Groene Amsterdammer published the sixth episode from the Necessary conversations: reflections on a new world (September 2020, Jurgen Mass editorial): Reflections in times of corona #6: Petra Stienen A divine voice in the silence. In this episode different topics were discussed such as: God, mental health and gender. The member of the Senate Petra Stienen presented several arguments supporting the differences in politics, economy and gender-violence between women and men during this pandemic. This fact check address three of them: “Not now”: women’s issues not considered,  Women on the front line, and Violence against women and increasing domestic violence.

“Not now”: women’s issues not considered in times of corona

The first statement that Petra Stienen makes around gender inequalities is:

“All the women I spoke to over the years always said one thing:“ If we emphasize that we want to be at the table and that our needs and interests need to be part of the decisions, because we have different views and a different economic and social position, that we are sitting at home with men so frustrated that they hit us – something we again see in times of Covid-19 – what do those in power say? “Not now.”

Here, Petra Stienen says that the women’s issues are not taken into account in politics and by people in power. She continues with an example from real life:

“In 2011, on International Women’s Day, on March 8, a group of women in Tahrir protested for more women’s rights in the new Egypt and they were scrutinized by their own colleagues on social media stating: “How dare you take the square for women’s issues, in these times of our glorious revolution? Not now”

The Egyptian revolution of 2011, also known as the January 25 Revolution started on 25 January 2011 and spread across Egypt. The date was set by various youth groups to coincide with the annual Egyptian “Police holiday” as a statement against increasing police brutality during the last few years of Mubarak’s presidency. It consisted of demonstrations, marches, occupations of plazas, non-violent civil resistance, acts of civil disobedience and strikes. Millions of protesters from a range of socio-economic and religious backgrounds demanded the overthrow of Egyptian President Hosni Mubarak. Violent clashes between security forces and protesters resulted in at least 846 people killed and over 6,000 injured. Protesters retaliated by burning over 90 police stations across the country. Egyptian women have been participating actively in the revolution, in the same way that they played an active role in the strike movement in the few last years, in several cases pressurizing the men to join the strikes. However, they were treated in a different way than men.

Many books and articles can confirm the repression against women in Tahrir: The Hidden Face of Eve: Women in the Arab World (2017), The Multimedia Encyclopedia of Women in Today’s World (2013) and State Crime, Women and Gender. This last book quotes Johansson-Nogues (2013) on the consequences that followed the oppression:

“Despite this active engagement and this feeling of gender unity, many women did suffer violent victimization during the protest and were denied participation in the transition period that followed the revolution”

Moreover, Stienen talks about her experience with “not right now” in her life, and in this case, in times of coronavirus pandemic.

“And if you ask a question about it – and I will – I still sometimes get the response:” Not right now “,” says Stienen. “In that respect, I feel a connection with my friends in the Middle East.”

Women on the front line

In the interview published in De Groene Amsterdamer Petra Stienen also comments that women are both on the front line as doctors, nurses or teachers and in many cases also have to be care givers at home. Looking at Statistics Netherlands-CBS’ studio released on November 13, 2019, it is stated that more women than men are working in occupations at higher professional or university level, in particular in the sector care and welfare education.  Moreover, in the academic year 2018/2019 748,000 students were enrolled in higher education study programme, as CBS explains. In veterinary medicine and care, welfare and health care programmes female students are in the majority. 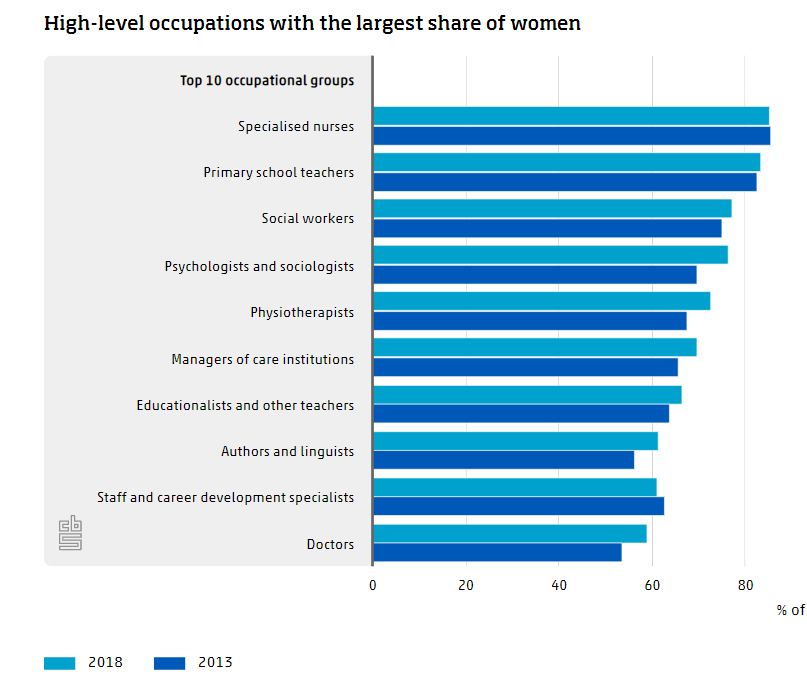 Source: Central Bureau of Statistics of The Netherlands. 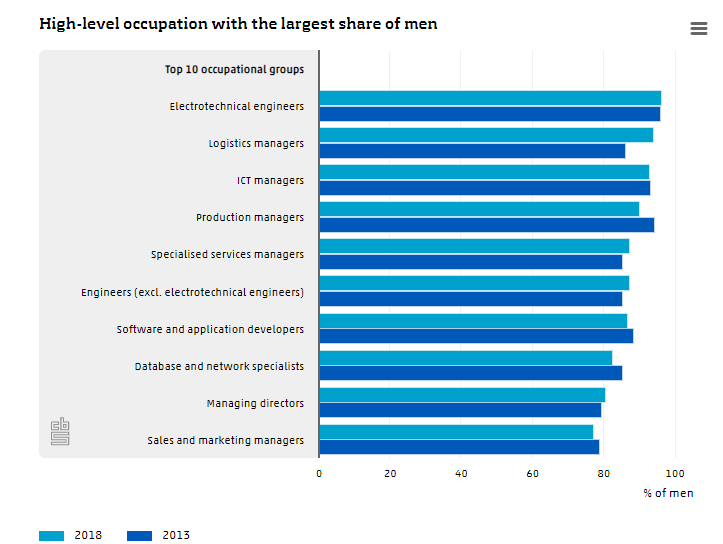 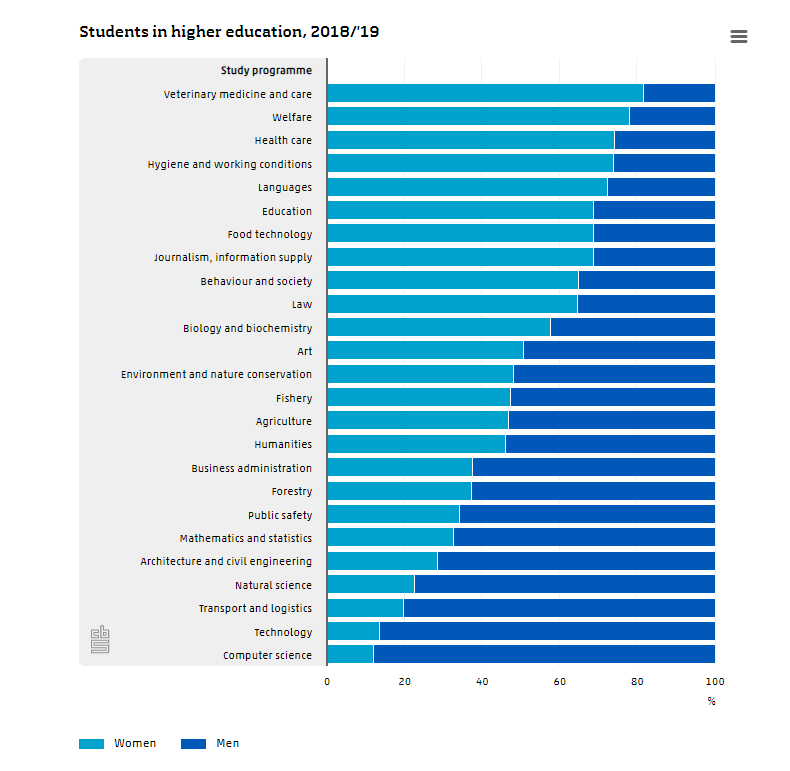 In addition, in a Policy Brief: The Impact of Covis-2019 on Women published by United Nations on April 9, 2020, it shows that the capacity of women to absorb economic shocks is less than that of men because of the differences in the earnings, savings and jobs. This can be read on the fifth page of the policy brief:

Moreover, Petra Stienen states that only 25% of women work full-time, compared to 75 percent of men. Combined with lower paid jobs “It means that the income decline that everyone has (due to corona, ed.) affects most women harder.”

Statistics Netherlands-CBS (More than half of Dutch people work full-time) show that in 2019 27% of women in the Netherlands worked full-time. The 25%, Stienen used, is from 2016. So full-time contracts for women are on the rise but it is still close to a quarter. 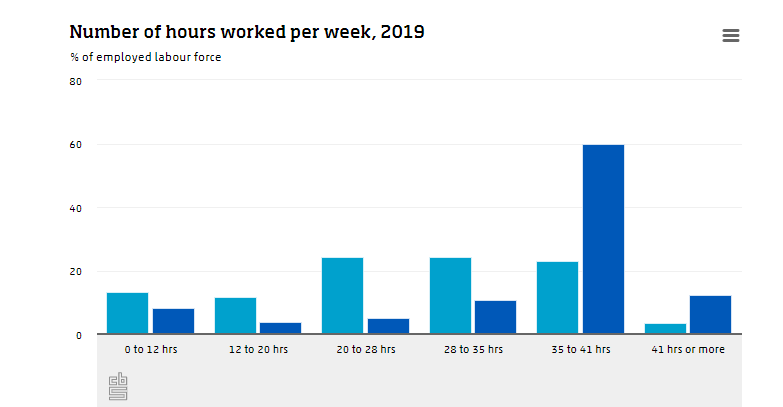 And last but not least, Petra Stienen speaks about gender violence and the increase during this crisis: 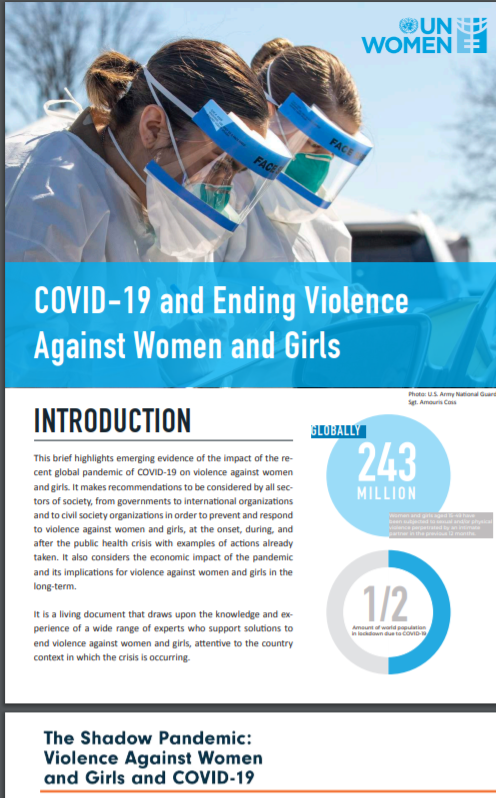 “Then there is the issue of fighting gender-based violence or the terror behind the front door, which is growing enormously in this crisis. And finally, the issue of women, peace and security that I find very interesting as a former diplomat.”

Stienen is referring to information on the UN Women webpage.

In the featured publication Covid-19 and Ending Violence Against Women and Girls. it can be seen that the COVID-19 context has changed the gender-violence situation, making it worse. According to the text:

“Emerging data shows that since the outbreak of COVID-19, reports of violence against women, and particularly domestic violence, have increased in several countries as security, health, and money worries create tensions and strains accentuated by the cramped and confined living conditions of lockdown.”

Furthermore, on page 3 of the feature, it can be seen that in France, cases of domestic violence have increased by 30% since the lockdown on March 17th. Also in Cyprus, the helplines have registered and increase in calls by 30 per cent.

In conclusion, there is sufficient evidence to support Stienen’s claim that this crisis affects women differently than men. Firstly, because they have different needs than men and these essentials are left aside by the people in charge. Secondly, women are in jobs with more exposure to the virus, they are more likely to be employed in the informal sector or small jobs, which makes their economic position more vulnerable. And, thirdly, violence against women during this crisis has increased. So, the statement “This crisis affects women differently than men” is mostly true.