Blog: Experience of integration of children from migrant families 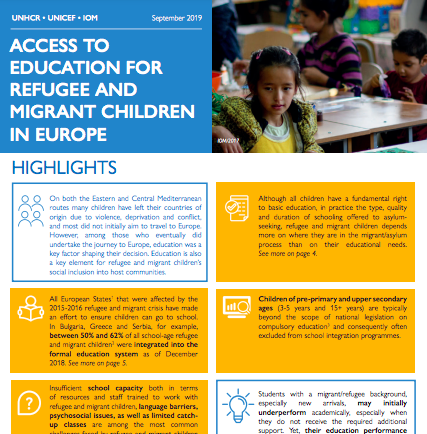 In September 2015, at the 70th session of the General Assembly, The UN General Assembly has set 17 Sustainable Development Goals and 169 related targets for the international community. The fourth global goal is formulated as “ensuring inclusive and equitable quality education and promoting lifelong learning opportunities for all”.

The education sector around the world is seriously affected by the developing processes of global migration. At the end of 2017, about 258 million people on our planet had the status of international migrants. Of these, 14% (more than 36 million) are children and young people under the age of 20.

On March 30, 2021, at a meeting of the Council on Interethnic Relations, Vladimir Putin said that Russian schools should control the number of students – children of migrants, so as not to repeat the situation as in some European countries:

“In some European countries, and even in the United States, when the level of migrant children in school reaches a certain percentage, local residents take their children from these schools… Schools are being formed there, which are actually 100% staffed by migrant children. In Russia, in no case should we allow the development of events of this kind, ” – the President of the Russian Federation said.

We decided to check whether such problems really exist in USA, EU and in Russia.

We found a scientific article by E. Demintseva in the scientific journal of the Russian Academy of Sciences, this article talks about the research that involved cities and regions of the Central part of Russia: Moscow, Moscow region, St. Petersburg, Leningrad region, Tomsk, Pskov and others. According to the collected data, Russian children in schools make up from 85 to 93%, children of other ethnic groups from 7 to 16%. Most representatives of other ethnic groups in the Moscow region – 16.2%. According to the study of school children who came mainly from the CIS countries: – in high school-2-4 people in each class; – in the middle classes-5-6 people in each class; – in primary school-7-9 migrant children per class. This is with an average class occupancy of 28-30 people. Indeed, local residents dubbed the schools where “non — Russian” children study “black”. At the same time, they understand this concept as immigrants from the countries of the Caucasus, Central Asia and the Caucasian republics of Russia. Local residents define children from the above countries as “migrants”, but many of these children have/had Russian citizenship or were born on the territory of the Russian Federation.

As for Europe, we found out that educational programs are being developed to help migrant children adapt more quickly to the culture, laws and customs of the country in which they now live. However, the DW article says that in the central districts of Berlin, there are twice as many migrant children in every fifth school as there are German children officially assigned to this school. In other major cities in Germany, too, there is a similar situation: “If the school has a majority of students from migrant families, parents will think twice before sending their children there”, says Simon Morris-Lange, a member of the expert council of the German Migration and Integration Funds (Sachverständigenrat Deutscher Stiftungen für Integration und Migration). As a result, migrant children are forced to communicate only with each other. Also the scientific research shows that in Germany, how well a child does in school is closely linked to their parental background, with immigrants and their children particularly affected by structural inequalities. The IOM statistics (2019) shows that currently in Europe the number of children and adolescents born outside Europe (including recently arrived refugee and migrant children) who leave school early is nearly twice as high compared to native-born children. As well as many migrant and refugee children in Europe face barriers to accessing school education.

According to statistics compiled by the George W. Bush Center, in 2015, the percentage of migrant children in US schools was at 23%. and the percentage of preschool-age children (from migrant families) is only 2%. But if earlier migrants had only one language to communicate with each other – English, because they belonged to different ethnic communities, today migrants have their own language of intra – group communication – Spanish. There is only one way out – segregation. The school will now not integrate immigrants, but immediately label them as “others”. And this regime of exclusion will overlap with the process of crisis differentiation that is currently being observed in the United States. 17 principals from South L.A. schools expressed disagreement with the policy. They argued that fluent English speakers serve as classroom role models for less proficient peers and that segregating students creates a “chasm” among them as well as “communities that are intolerant of those who are different.”

In 2019 Education Week published an article describing the situation around migrant children in the United States. The author says that growing  number of migrants causing problems not only for the educational system but also for the migrant children, because they are facing serious psychological pressure from local children and non tolerant people. Anyway educational system (schools especially) making small, but important gestures to communicate to migrant children that they are welcome. At the same time schools having problems with finance. As migrant students flow into schools throughout the academic year, there are no funds that follow to help pay for their education. Schools must adjust with the budgets they have. But by the 2021 this problem has not yet been solved but the US government doing their best to deal with it by supporting funds and schools.

Also we decided to contact teachers, working in schools where migrant children are also studying, and parents of migrant children, and ask them a few questions. These interviews can not claim to be a full disclosure of the topic, but nevertheless, they are live voices of people, who know the situation from the inside. We were able to talk to a teacher at a school in Chelyabinsk where migrant children study, as well as to migrants from Kyrgyzstan who now live in Paris and whose children go to a local school.

From the interview with the teacher, it follows that there are few migrant children in the school. For teachers and school administrators, migrant children are not a problem. These children are taught in general education classes according to the general program, attend additional sections. People from Central Asia are very diligent in their studies. Their parents pay great attention to preschool preparation, taking into account the fact that children need additional help in learning Russian, so they often resort to the help of tutors. Most of the problems arise with the Russian language and reading, but they are very good at math. Standard classes – 30-35 people. Migrant children in classes are usually 2-5 people, no more. Coming to the first grade, children are very shy, open up for a long time, but after six months they join the team. They do not lag behind their peers. Both children and their parents pay great attention to their studies. Children have a great desire to learn, and they are very active in contacting teachers. Thus, ethnicity becomes important only when the child does not know the language or does not share the interests of his classmates. The problem of this school is different: these are the children of local Gypsies. According to the teacher, this contingent is very difficult to train. In their families, it is initially historically laid down that there is no learning process. Children are completely irresponsible about education – they want to come to school, they do not want to come to school. Parents do not insist on this. Girls get married early and there is no need for them to continue their education. Such children are isolated, they do not have any contact with other children. They have their own office, their own recreation area, they eat at a certain time, so that they do not intersect with ordinary children. In this case, neither the children nor their parents want to assimilate and adapt, cultural national traditions prevail over state ones.

From interviews with parents, it follows that in Paris, the number of migrant children in the class is 1-3% of migrants without papers and about 10% with a residence permit. Every year, the school has fewer and fewer specialized programs for the adaptation of migrant students. Educational programs for all children are common. There are no differences. Every year, classes are changed: 30% remain, the rest are redistributed to different classes. This is done specifically to increase children’s resistance to stress. As for the relationship of migrant children with other students, it is difficult for parents to say here, but there were no conflicts, but most likely they are friends by interests, districts, and nationalities. The attitude of parents of French children to co-education of children is adequate, there is no racism or nationalism, because this is prosecuted by law. Based on the interviews, the situation in Russia and in Europe does not look critical, however, in the scientific literature and the media we can find confirmation of the words of Vladimir Putin.

Conclusion: after studying the situation with migrant school children in the United States, Europe and Russia, we can conclude that such a problem does exist, but so far not on the scale that Vladimir Putin is talking about.