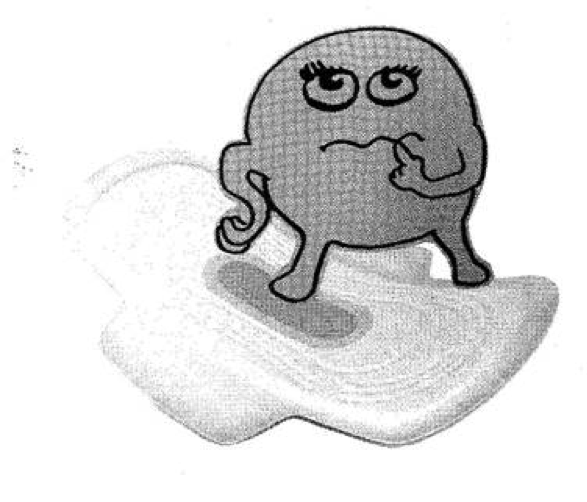 Hello! I’m Pauline. I’m a plastic particle living in a sanitary pad. I hear a lot of things said about me, so I decided to find out more for myself by meeting and questioning actors in the world of plastic that could enlighten me about my life and my fate. I’ve been wondering about four questions, and I’m going to share my process with you.

While waiting in the aisles of a convenience store, I read that the pads next to me, the organic Natracare brand, were criticizing mine on their website, accusing it of being made up of 90% plastic. However, no sources were cited to back up this stunning figure. So I’ve begun my investigation to discover the truth about my home.

I first contact Natracare to get their sources. Unfortunately, they’ve declined to give them to me. Next I turn to the accused brands, including my own. I contact the companies of the pads around me on the shelf, which happen to be the three leading brands on the market: Nana, Always, and Vania. Unsurprisingly, each of them direct me to the list of ingredients available on their respective websites. I then understand that the top sheet and bottom sheet of my pad are made of plastic. I had a hunch, since I live there! However, it states that the absorbent core is composed of “polymers and superabsorbent polymers.” Darn, I don’t know what those are.

I manage to obtain some information: polymers are chains of monomers, i.e. clusters of molecules. Even so, these details still don’t help me understand what these absorbent shells contain. Perhaps some chemists could enlighten me… Sadly, my repeated calls to the engineering school Chimie ParisTech have been unsuccessful.

Frustrated by this lack of information, I turn to other actors. I navigate to the website for ANSES (Agence nationale de sécurité sanitaire de l’alimentation, de l’environnement et du travail; the French Agency for Food, Environmental and Occupational Health & Safety). A report was published in June 2018 following an appeal to the Directorate General for Health (DGS) and the Directorate General for Competition Policy, Consumer Affairs, and Fraud Control (DGCCRF). Still no way to know how many of my fellow plastic particles live in my pad. Will Europe tell me more? Not really. The European Chemicals Agency (ECHA), after an appeal to the European Commission by Europe Ecology MEP Michèle Rivasi in 2017, stated that the substances contained in pads do not exceed thresholds for toxicity. Which means the manufacturers aren’t required to reveal my pad’s composition. So I contact one more actor: the magazine 60 Millions de Consommateurs (EN: 60 Million Consumers). They drew up a list of the components found in my pad in 2016. It doesn’t teach me anything new. I attempt to call them, but get no response.

Just as I’m about to throw in the towel, I make one last call to a chemist specializing in polymers. He confirms that the absorbent core of my pad also contains plastic particles, and that it’s very likely we make up 90% of my entire pad! I didn’t think there were so many of us. Furthermore, ANSES calls me back and tells me that in accordance with European regulations, they’re unable to provide the ingredients contained in my pad.

I conclude that I’m not alone; us plastic particles probably make up 90% of my pad, despite the lack of official figures!