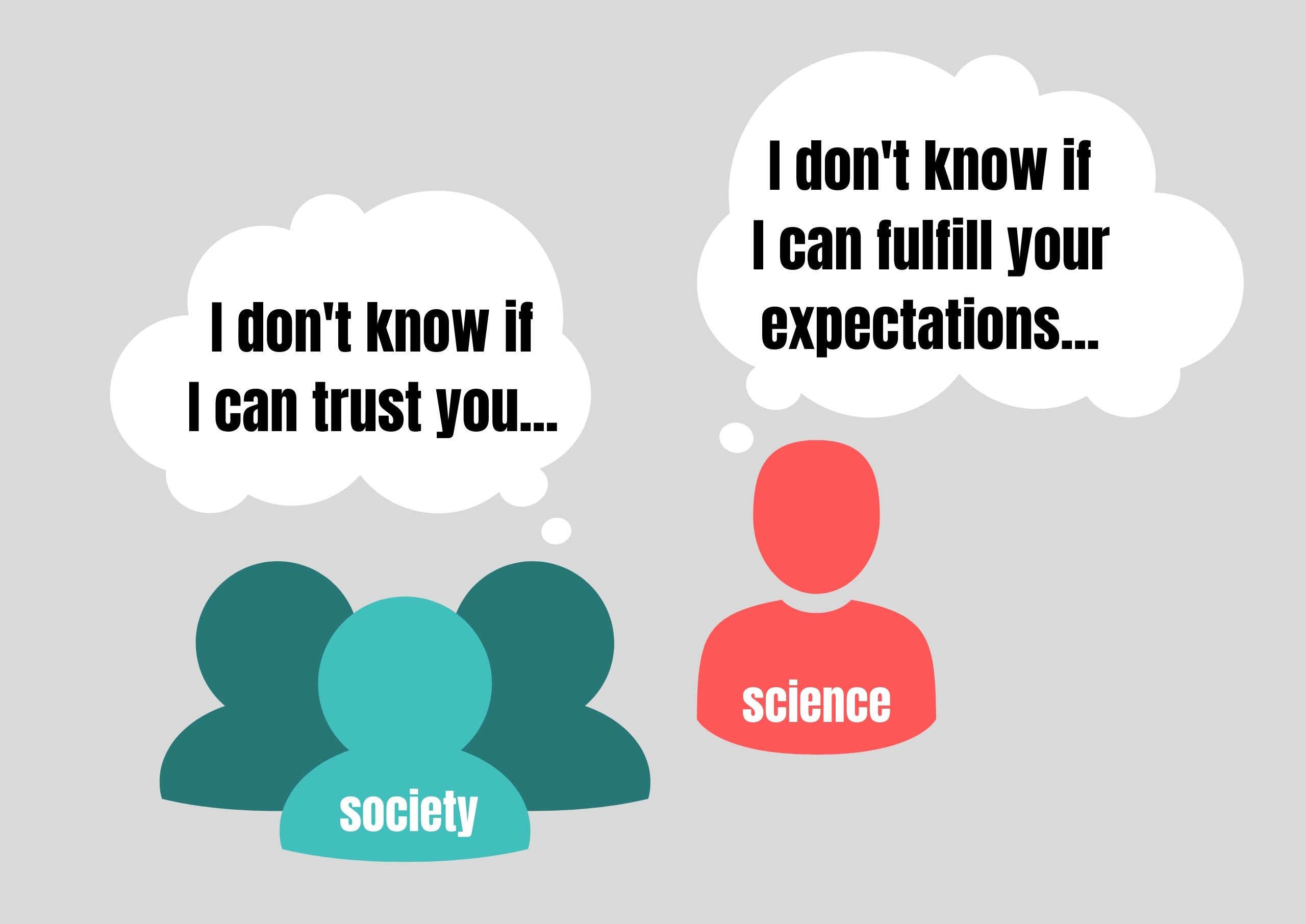 Ever since COVID-19 changed our daily lives, the news seem overloaded with varying information on the pandemic. Updates on the vaccination rate and the number of infected people as well as videos of demonstrations on the most recent measures by the government and articles on the newest conspiracy theories about the coronavirus make one feel extremely overwhelmed. As a consequence, one might think that the part of society that is turning their backs on science is getting bigger.

To analyze the situation from a scientific angle, we talked to Markus Weißkopf, managing director of Wissenschaft im Dialog, a German organization for science communication. He gave us insights on the actual relationship between society and science, whether the pandemic had an influence on it and the challenges of science communication.

“The relationship between society and science is complex”, says Weißkopf and adds that it is characterized by strong societal expectations. People want science to solve the major issues of the world that affect society directly, such as the pandemic. Thus, science is sometimes viewed as a savior on such issues, offering a way out or at least relief. “With the rapid development of the Corona vaccines, this expectation was at least partially fulfilled”, comments Weißkopf. Another factor which influences the relationship between science and society is the visibility of scientific research: “What is seen as science is only a small part of what is taught and researched in universities and institutes.” Weißkopf elaborates that the society usually just recognizes scientific results. Rarely the real conditions and methods of “producing” these results find their way into the media spotlight and public discussions.

The lack of visibility is one of the biggest issues in science communication. Every year, Wissenschaft im Dialog conducts a representative survey on the attitude of the German population towards science and research. The results are published annually on the Science Barometer. The results of 2020 show that around 40 percent of the German population assume that scientists do not tell them everything they know about the coronavirus. This relatively high number might lead to a common feeling of growing distrust towards science within the society. This turns out to be mostly wrong.

In 2020 the distrust of society towards science increased slightly. Whereas 8 percent of the respondents said they “did not” or “tended not” to trust in science and research in 2019, the proportion who distrusted rose just slightly to around 10 percent for the year 2020. The amount of people who trust “fully” or “rather” increased from around 50 percent in the year 2019 to 73 percent in April 2020. Therefore, two thirds of the respondents have a positive attitude towards science and research. Weißkopf rates this number as “relatively high”. No matter the positive results of the Scientific Barometer, Weißkopf still sees room for improvement and is of the opinion that “science needs to open even more and engage in conversations with those who are uncertain.”

Even if there is currently no evidence of a general loss of trust among the public, it is still confronted with radical dissenting voices. “We are also seeing skeptical voices with regard to the virus, which are being picked up very strongly in the media in particular”, comments Weißkopf. Before the start of the pandemic, these individuals were more isolated, having less chance of networking due to fewer public recognition. The danger of misrepresentation through too much media attention for a small minority can cause the general public to overestimate such tendencies: “Rather, there is a vocal, science-skeptical minority that spreads conspiracy myths and reinforces its own beliefs through active media production. This minority is far from becoming socially acceptable.”

Weißkopf holds science and science communication accountable to take targeted action against fake news or misleading reports in order to ensure that these doubts don’t solidify in society. Furthermore, scientists need to be supported when being attacked so that they don’t withdraw from the public and continue to educate on these issues.

Science communication needs to focus on the undecided

With regard to the pandemic, Weißkopf praises the general science communication and the attempt of the society to understand the epidemiological situation. Nonetheless he recommends improving communicating the processes, methods and values of science. This would improve the trust, especially for those who are undecided because they rarely hear about science or know few or no scientists. “We can get better at communicating uncertainties, and I also think we could sometimes get better at listening.”