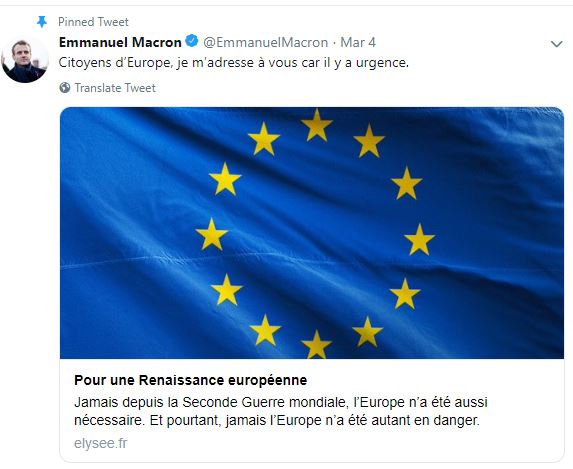 Russian media haven’t left that without a comment. Gazeta.ru particularly highlighted the part about banning European parties from getting finance from non-Europeans. Assumptions that Macron is hinting at Russia and receiving Marin Le Pen’s funds from Russian banks cannot be understood unambiguously, because in French media space there is also a problem of Chinese expansion in Africa, where the French interests meets with Chinese and US.

REGNUM highlighted that Chancellor Kurz endorsed Macron’s proposals to protect EU external borders and his efforts to establish a new partnership with Africa. Thus, the Russian media are aimed at disseminating information related to the strengthening of EU borders and searching for external enemy. Such attention to the statements of Kurtz can be explained by the pro-Russian views of Austrian People’s Party leader and good relations with Head of  Russian Foreign Ministry, Sergey Lavrov.

But if we return to the text – primarily French President warns Europe from fragmentation. “Never since the days of World War II, a united Europe wasn’t so necessary. And wasn’t so weak” – said Macron. He calls 19 member countries to strengthen the Eurozone with strong state borders. “They must adopt both: stricter control at border areas and a general asylum policy for migrants,” – he said.