Blog: From a gratuitous accusation to major consequences 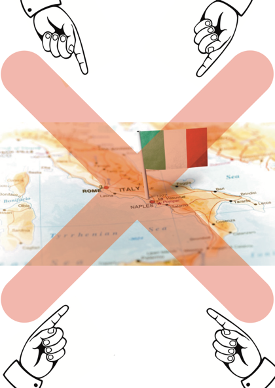 In times of Corona, making the right decisions is not easy. Different experts come up with quotes and points of view about this pandemic. However, some of them are dangerously hard below the belt. I am mainly talking about the statement “After the plague, Corona is now entering Europe through Italy”. Not only is this a heavy statement, but it can also completely hurt a country, both financially and in their honor. And this is why.

During our second fact check we noticed that a lot of mud was being thrown in the direction of Italy as a result of COVID-19 and the role of the country. Medical historian Bob Van Hee embarrassed an entire country with one statement. That Italy is the cause of the problems in Europe is a heavy and at the same time dangerous suggestion.

First of all, you insinuate a lot of things here. This claim makes it seem that in Italy, hygiene was handled nonchalantly several times in history. We immediately wondered whether this was really the case. That it is easy to point the finger at the chosen scapegoat is a fact, but that is why it is not yet justified. It’s something you have to think about. On our way to answers about the truth of this claim, we were surprised by evidence that corona did not end up in Europe via Italy. According to Think Global Health, COVID-19 entered Europe via, in order, France, Germany, Finland and Spain before a first infection was detected in Italy.

This brings us to a second susceptibility to such a claim. And that is that it is simply incorrect. It is difficult to blame a country if other countries had been found to be infected much earlier. We believe that the number of deaths, where Italy is at the top in Europe, is independent of the fact that it is the country that brought the pandemic into Europe.

Apart from that, this statement also undoubtedly has consequences for the future of the country. Within our editorial staff we have held a small inquiry. The key question was “Who wants to go on holiday to Italy in the coming years. The answers came quickly, and were clear. 3 times negative. And that will undoubtedly not only be the case in our limited circle. That’s a financial hangover from which no one just recovered.

But not only in the field of tourism the consequences will be huge. Also within European politics we predict a lot of mistrust towards Italy. Because of the ‘finger-pointing’ work, there is enormous pressure on the Italian government. As a result of this claim, many people have become suspicious of the approach and reporting in Italy about this pandemic. In our opinion, collaborations are in danger of coming to an end.

We already mentioned that Italy is at the top of the ranking in the number of deaths because of COVID-19. But we also noted that this is separate from the question of who brought it in. In our opinion that discussion is also completely beside the issue. The fact that it is to some extent about who caused this problem in Europe is a great pity. In our opinion, the question should not be “who is to blame here?”. But it should be “how are we going to solve this together?”. Because that’s how we have to fight this unknown monster. Together.

Belgium, France, China, Finland and many other countries have shown solidarity and strength. All over the world people are thinking creatively about solutions and tips to make quarantine easier. In almost every street in Flanders, people are applauding together for everyone who is keeping our country straight at the moment. By coming up with solutions collectively and with unanimity, we come up with a solution. So let’s stop looking for a scapegoat.