Media analysis: The crucial role of accuracy in media reporting about the pandemic 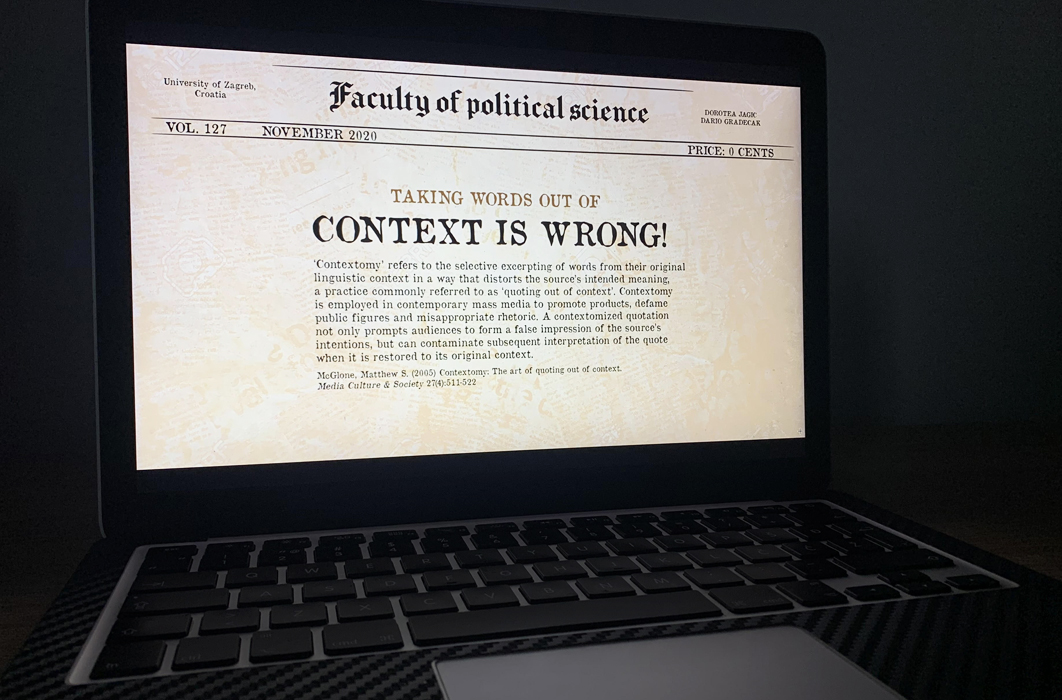 A prominent and internationally recognized Croatian scientist Mr Miroslav Radman was interviewed in one Croatian evening TV news called RTL Direkt. He was commenting on the COVID-19 situation in Croatia and said how he could not understand why there was so much panic since “we have 967 fewer deaths than last year“, a claim which has been proven to be false by EUFACTCHECK.

This claim, along with many other claims made by the members of the scientific community in Croatia in the recent months, open up the question of accuracy – not just of those whose claims are reported on, but of those that report on it. In this sense, many Croatian media outlets have been creating a discourse around the pandemic using claims and opinions of two opposing sides in the scientific circles in the country. These claims are often conflicting, but more often it is the media that provoke this conflict. This provocation, while it is not in any way a sign of good journalism, is more dangerous as these claims are often either false, incomplete or taken out of context.

One of the examples is an article by a Croatian news online outlet Jutarnji.hr. Its headline translates to ”War of the scientists“. A prominent Croatian-German scientist Mr Ivan Đikić comments on Mr Miroslav Radman’s claims about COVID-19. Mr Radman has downplayed the pandemic on many occasions. In an interview for Croatian newspaper Slobodna Dalmacija Mr Radman said the following: ”Around 50.000 people die in Croatia every year, which is a little more than one percent. When we add to that about 300 deaths from COVID-19 – those are the figures of 50.000 plus 300. (…) Why is 300 deaths more important than 50.000 deaths?“ Mr Đikić replied: ”COVID virus must not be ignored or belittled. We have learned this from the example of many countries in the world, especially the richest and most advanced country in the world, the United States of America.

They had over 210.000 deaths (more than in any war or disaster in the last 100 years) and over 7 million sick within nine months. One-fifth of companies closed and 30 million people lost their jobs.“ Croatian online news outlets have reported on either Mr Radman’s statement, Mr Đikić’s response – or both. However, in both cases not one of these outlets did any research on the validity of the numbers Mr Radman and Mr Đikić were talking about. People are already feeling lost and confused during the pandemic, so to have publishers simply copy-paste scientists’ contradictory statements without fact-checking or explaining them better, only creates more confusion in society and distrust in the scientist community.

In another example, Member of the Scientific Council of the Government of the Republic of Croatia Mr Gordan Lauc posted a status on Facebook in which he said it is ”too early to relax“ despite the good trends after certain measures were put in place. One of the comments stated how the question of how many lives could have been saved with stricter measures will remain unanswered, to which Mr Lauc replied: ”If you just want to have a minimum number of deaths, then you should let the pandemic spread freely and kill 0.1 or 0.2 of the population, mostly the elderly and the ill. We already know that in the long run, the total number of deaths that will result from coronavirus control measures will significantly exceed the number of people who will be saved by those measures. The stricter the measures, the more people will die because of them.

The calculation is very simple and does not support stricter measures.” Most media outlets took Mr Lauc’s statement out of context. Although Mr Lauc spoke hypothetically, the media interpreted his words as if he was claiming that we should let coronavirus spread and kill the elderly and the ill. News outlets made unspecified headlines such as: “Lauc provoked an avalanche of rage with comments about the corona and the victims”; “ Scientists were appalled by Lauc’s comment on the victims of the coronavirus”; “Lauc’s comment on the victims of the coronavirus angered many.” All three news outlets started the article with Mr Lauc’s first sentence from his comment, completely out of context. While they did post his entire comment later in the article, using headlines and leads such as the ones mentioned above – solely for the purpose of getting people to click on the article – is wrong. Later that same day, Mr Lauc posted another status on Facebook and claimed that the media were taking his words out of context.

Additionally, the danger of inaccuracy is visible from the way Mr Radman’s claim – that we checked – was reported by dozens of Croatian media. The article that accompanies the TV interview on the official news RTL website first presented that Mr Radman said there were 1967 fewer deaths – one thousand more than he actually claimed. Soon dozens of Croatian media outlets reported on this interview – including the most prominent ones as Jutarnji.hr, Index.hr and Slobodnadalmacija.hr – and used the false number.

Mr Radman’s exact words in the interview were: “In this period of the year there are almost thousand – nine hundred sixty-seven fewer deaths than in the same period last year.“ While fact-checking his statement, our team debated whether he meant “1967 fewer deaths“ or “967 fewer deaths“.  However, later in the interview, Mr Radman referred to the number of deaths per month again, but then he used the term „almost a thousand“ which makes it clear that he was using the figure of 967 fewer deaths, and not 1967. Very soon RTL corrected the mistake, however the wrong number is still present in the header of the video with the TV interview. What surprises even more that none of the journalists in the media who reported about this interview did not check this claim by actually watching the video. Had they watched the entire interview, instead of (most likely) using other news outlets as their sources, they would have realized what number Mr Radman was talking about. While it may seem like a small mistake, this kind of superficial and non-existent fact-checking process by media outlets is a serious threat to their trustworthiness, but also to society.

These are only a few of many examples of often weak research skills in Croatian media that result in inaccuracies that may have serious consequences. Accurate and verifiable facts are the backbone of journalism, and during these sensitive times – when media become carriers of disinformation or uncritical transmitters of dangerous propaganda – this is more important than ever before.