Mostly false: Salvini: “Repatriates (of migrants into Italy): + 28% since I’m in the government”

In a tweet, Deputy Prime Minister of Italy Matteo Salvini claimed on December 16, 2018: “Repatriates (of migrants into Italy): + 28% since I’m in the government. I am sorry that the opposition and some misinformed journalist even falsify the numbers and the reality.” His claim turns out to be mostly false.

This tweet was in response to an article from the Italian outlet Gazzetta Del Sud, in which it was mentioned that Salvini had also claimed that the number of migrants who had died in the Mediterranean have decreased almost tenfold since last year.

Salvini is well known when it comes to his policy on migrants who wish to seek refuge in Italy. He has been vocal in drafting legislation that makes it more difficult for migrants to find shelter within Italy, by removing what has been called certain humanitarian protection statuses. These statuses are meant to help migrants and those in need supplying International protection permits (refugee status and subsidiary protection) for 5 years while humanitarian protection permits are granted for 2 years, according to the Association for Juridical Studies on Immigration. In mid 2018, the Italians approved Salvini’s bill, giving reason for a need to check the statistics he tweeted to see if his statement really is true, and not an over-exaggeration in order to make his plan more influential. 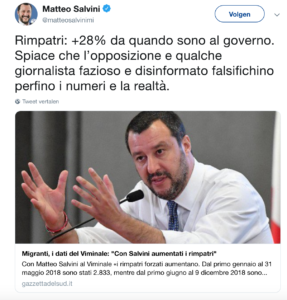 Looking at migrant data from 2018, specifically in the Italian/Central Mediterranean area, there is a noticeable decrease in migrants coming into Italy. However, it is important to note that the decrease is overall, not just in Italy, but in Turkey and the west Balkans as well.

In reality, compared to Turkey and the eastern Mediterranean, Italy has only decreased migrant migration by 67% from 2016, while in the east they have seen a drop in at least 90% of migrants (since 2016). Also, specifically in relation to migrants coming by water, arguably the most deadly way for refugees to come into Europe, we see according to data from the United Nations High Commissioner for Refugees, that there has been a mass decreasing trend in migrants coming via ocean into Europe since late 2015.

The statistic that is most interesting however, is the claim that there is a 28% increase in Italian repatriation of migrants as long as Salvini has been in power. According to the Garante nazionale dei diritti delle persone custodite o privato della libertà personale (Na-tional Guarantor of the rights of guarded persons or deprived of personal freedom) this claim is not a true. Salvini, who has been politically involved since 2009, has held his major position as Deputy Prime Minister of Italy only since the beginning of 2018, which should be assumed as the position he is talking about, due to the pro repatria-tion legislation he has been speaking out for and passing.

According to a press release by Garante Nazionale (translated), which is a certified NPM or a national preventive mechanism certified by the Optional Protocol to the Convention against Torture under the United Nations:

Meaning that this is conflicting with Salvini’s 28% increase claim, a statistic that that hard to find other than on noted “alt-right news outlet” sites like Breitbart, where writer Virginia Hale claims  “The number of illegal migrants who were put on airplanes and sent home stood at 2,833 between January 1st and May 31st this year prior to Salvini’s entering the Viminale. Since then, it has risen to 3,626”, contrary to the information provided by the UN related Garante Nazionale.

Though there is a decrease in migrants coming into Italy and the Central Mediterranean, Salvini shouldn’t be too quick in taking all the credit. Even for increasing the number of migrants that Italy sends back to their homeland, we see from primary sources that his numbers and the numbers of questionable news sources do not correlate. And though with Salvini’s legislation passed legislation being less than a year old we might see an increase in repatriations through 2019, however it is not true to say that the rate increased in 2018 compared to other years in Italy before Salvini took office. We therefore conclude that the claim is mostly false.