Swedish nationalist party the Swedish Democrats tweeted via their EU account on January 4th 2019, claiming that “5000 people have received asylum in Sweden due to newly introduced law on upper secondary education”. This is mostly true.

The Swedish law Gymnasielagen (directly translated as ‘law on upper secondary education’) came into force on July 1st 2018. It is a new law which regulates the asylum procedures for unaccompanied refugees who arrived in the country when they were minors. The asylum application process can take more than a year on average, and many refugees who arrived when they were minors turn 18 before their application is handled. The idea is that these unaccompanied refugees can renew their application and get a new chance to gain a temporary residency through enrolling in high school studies of some form. 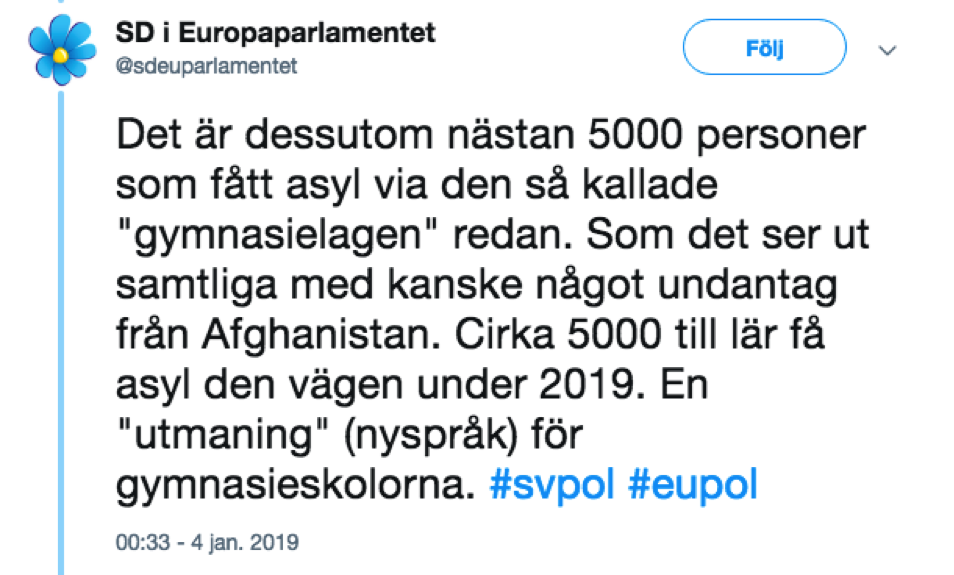 A screenshot from the tweet by the Swedish Democrats

The new law has been a topic of debate in the country and has been heavily criticised by several national migration courts. The main criticism has revolved around change in what is needed as proof of identity by an asylum seeker. The law of upper secondary education states that a temporary residency can be granted, even if there is no official document proving the asylum seekers identity. National migration courts say that this is against EU asylum policy and the Schengen agreement. The migration court in Gothenburg even brought the new law to the attention of the European Court of Justice.

Those who are granted a temporary residency can stay in the country for 13 months.

The far right and nationalist Swedish political party the Swedish Democrats have been one of the loudest voices of criticism towards the new legislation. On their EU specific Twitter account, the party states:

“Close to 5000 people have already received asylum in Sweden due to newly introduced ‘law of upper secondary education’. All from Afghanistan, with maybe some exception. Around another 5000 will probably receive asylum in 2019. A “challenge” (newspeak) for the high schools.”

According to the official statistics from the Swedish Migration Agency, 4908 individuals have been granted a temporary residency in Sweden under the new law of upper secondary education in 2018. 4580 of these applicants were of Afghan origin. Hence, the first part of the statement is mostly true.

The second part of the statement, referring to the numbers in 2019, is speculative. According to an article in Swedish public service media, a third of the applications under the new law have been rejected. 11,715 refugees have applied for asylum under the law of upper secondary education, and over 7,200 had been considered by the end of 2018.

In short, close to 5000 people have received a temporary residency in Sweden under the new law of upper secondary education, and most of them were from Afghanistan. Nonetheless, that the same amount of people will be granted asylum in 2019 is more uncertain. Therefore, the statement is mostly true.