True: “Voter turnout in EP elections has steadily decreased since the late 1970’s”

According to the data presented in the article of the Russian Internet portal “Russian Informational Agency “Novosti” on 3 of May, 2019, European Parliament elections voter turnout has steadily decreased since the late 1970’s.

On May 3, 2019,  “RIA Novosti” published an article, telling about reduction of voter interest in EP elections – a decrease in turnout. It reports that according to data provided by the European Parliament, which was analyzed by journalist of RIA Novosti, at the first elections to the European Assembly, which were held in 1979, the voter turnout of 9 member – countries of Union was 61.9%. In the second election held in 1989, with an increase in the number of participating states up to 12, turnout fell to 58.98%. 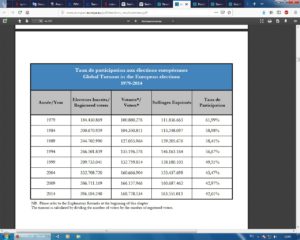 The publication reports that the activity of voters continued to fall steadily. For example, in the elections to the EP in 1999 with 15 EU members (49.51%), and in 2004 in the format of 25 community states (45.47%), as well as in 2007, when the EU expanded to 27 participants (42 , 97%).
At the last elections of MEP’s in 2014, the voter turnout index in 28 EU countries dropped to 42.61% .
The source to which the author refers was presented by the European Parliament review. In order to check the statement in the Russian material, we turned to the official website of the European Parliament and found a document (Review), which presents the results of a survey on voter turnout. On page 50, we found a table with data on the overall turnout at the European Parliament elections, starting in 1979.

The data presented in the European Parliamentary Election Report indicate, that the information published on the “RIA Novisti” Internet portal is true and coincides with the figures presented.

Thus, after analyzing the data of the Russian portal “RIA Novisti” and the data presented at the EP official website, we conclude that, indeed, voter turnout in the elections to the European Parliament (EP) has steadily decreased since the late 1970s, therefore, this information is true.

Leave your comments, thoughts and suggestions in the box below. Take note: your response is moderate.