Uncheckable: “Our seniors will be better protected from future pandemics if they age at home”

Monique Boutrand, a French central administration officer and expert on ageing issues, states in an article in Le Monde that letting retired people stay in their own homes will protect them better against future pandemics than when they live in retirement homes.  This claim is uncheckable.

We are currently in a pandemic situation that is unprecedented in France. Today, more than ever, concerns for our elders are growing. The figures recorded by the Etablissements d’Hébergement pour Personnes Âgées Dépendantes (EHPAD, French retirement homes) are alarming. The establishments have had to face a great wave of contamination which has left many victims in its wake.

The article by Boutrand in Le Monde

On the other hand, Monique Boutrand explains in her article that the epidemic would have affected less the elderly who were confined to their homes. For the time being, the figures demonstrating and proving this fact have not yet come out. However, the curves give us a clear overview.

In addition, sources external to this article state that certain facts such as the proximity to each other of nursing home residents and “the existence of common living areas may have favored the spread of the virus” and “from the moment the virus enters, it spreads very rapidly”.

Thus, this makes us lean towards the idea that the statement is close to be “true”. What the expert is trying to do in her article is to make us think about the issue of retirement homes during pandemics. Are they the most suitable places to protect our elders? And, Monique Boutrand takes a stand on the development of local services and explains what should be done.

In support of her remarks, the specialist mentions three different sources, most of which come from reports by French government experts. To verify this information, we used multiple organizational charts to analyze the reliability of the affirmation, the author and the source. One by one we analyzed each of the sources that was mentioned in the article.

Let’s take the first source as an example. This is a report by Luc Broussy entitled ‘L’adaptation de la société au vieillissement de sa population. France: année zéro!’ Even before checking the contents of this report, we have taken on the task of doing some investigations on the author Broussy. This step allowed us to know if he is indeed a reliable and credible author, whom we can trust. Luc Broussy is a member of the French government since he is the General Councillor of Val-d’Oise (department). What attracts our attention is that he is the Monthly Director of the Retirement Homes and is considered a specialist in issues related to ageing. Thanks to this analysis, we were able to conclude that Broussy’s words are worthy of consideration.

In his report on the aging of the population, the specialist has taken into account numerous studies, sources and expert opinions in order to strengthen and give meaning to his claims. In one part of the dossier, he states that “future generations of older people will know better than their elders how to anticipate and predict” because they will be “fit to use technologies in the home”. Thus, he states that it is high time to think differently and that “home care policy must be the priority”. In support of the above, Broussy refers to an expert in this sector, Gilles Duthil. He is quoted as saying in a report that “the private home must now become a public matter”.

All of the points that have been raised in Broussy’s case are consistent with Monique Boutrand’s article. This proves the reliability of what she is stating and brings us to the idea that the predictive claim she makes is bases on reliable assumptions.

We know for a fact that elderly people are more touched by the virus; they show more symptoms and have more chances to be really affected. In France  25 809 people  have died (updated on the 6/05/2020) of  Covid-19:

These statistics show that more than half of the population were in elderly homes. 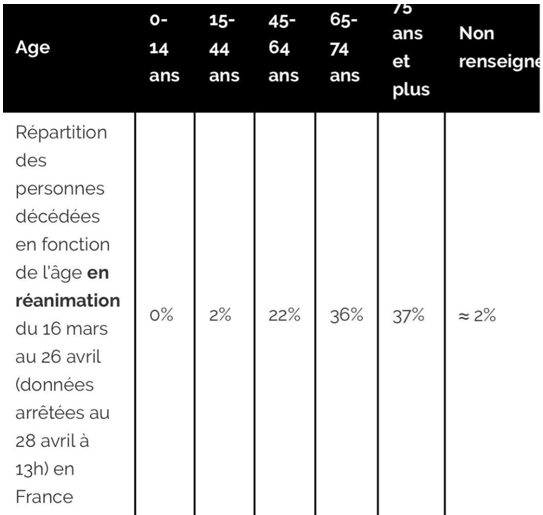 But as far as we know, people are happier in their homes than in nursing homes, as they were closed for visiting during this period of time. This article shows how much people are sadder in nursing homes and how they wish to be closer to their family, since it is their “only source of happiness”.

So, to sum up: Monique Boutrand relies on three different sources from the French government to prove her assumption about future pandemics and the protection against these of elderly people. They have been proven to be reliable sources and figures since they have been treated by experts on the subject of ageing. Nevertheless, the lack of precision on certain figures and certain uncertainties leads us to say for the time being that this is not a 100% true claim. We arrive at the conclusion that the statement “Our seniors will  be better protected from future pandemics if they age at home” is uncheckable.