Uncheckable: “The EU yields 1500-2000 euro to every Dutchman annually”

It sounds great: 1500 to 2000 euro per year for every Dutch citizen, only because the Netherlands is a member of the European Union. This is what the Dutch progressive liberal party D66 states in a twitter response to a promotional ‘Nexit’ video by extreme right PVV leader Geert Wilders. To good to be true?

“The European Union yields 1500 to 2000 euro to every Dutchman annually.” It seems to be a statement with a long history. In 2012, former D66 party leader Alexander Pechtold claimed this for the first time, in the Dutch television program ‘Buitenhof’. From time to time, the party still 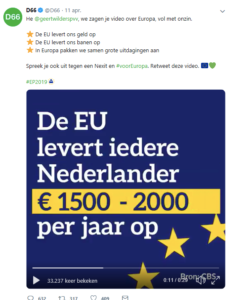 uses the statement as an argument in favor of its pro-European Union attitude. For instance, on the 11th of April, 2019, when D66 posted a video including several benefits of European cooperation. The party refers to the CBS (the Dutch Central Bureau of Statistics) as the source of its statement. However, CBS does not have any data about Dutch earnings from the EU. CBS does have data about remittance of all member states of the European Union.

CBS being referred to as a source, seems to be a mistake. When several twitter users ask for factual explanation, the party refers to a CPB report (the Dutch Central Plan Bureau) about profits from the introduction of the euro. Not CBS. The report by the CPB is from 2014, and was written as a result of claims made in the book ‘Europa in Crisis’, by Coenraad Teulings, the CPB-president at the time.

The report refers to the internal market analysis that the CPB carried out in 2008. In the report, it is noted that the total Dutch export of goods is 18 percent higher than it would be without an internal market. The effect of increased trade on the GDP was subsequently estimated. It is estimated that the GDP has increased between 4 to 6 percent. This means an income increase of 1500-2200 euros per year for an average income. However, the CPB places a large disclaimer on this data, as it is unknown as how the economy would have developed if there hadn’t been a common European market.

Of course, The Netherlands have to pay a membership fee to the European Union. This sum partly consists of VAT (value added tax) and a sum that is based on the height of the GNI (Gross National Income). The Netherlands also receive funds from the EU. For example: to carry out the Common Agricultural Policy. In 2017, the Dutch remittance to the EU was an estimated 6,9 billion euros. The Netherlands received 3,7 billion from the EU. All in all, it can be concluded that every Dutch citizen has to pay 187,35 euros to be a member of the European Union in 2017.

If we subtract that last amount from the estimated income increase of an average income, the result is quite close to the 1500-2200 euros that the EU would bring all Dutch citizens per year, according to D66. However, there is a large number of ‘ifs and buts’ to this story. D66 claims that every Dutch citizen will receive an extra 1500-2000 euros per year, thanks to the EU. But this is not correct, since this only applies to average incomes. Moreover, the estimations by the CPB (like mentioned before) are not completely reliable, because we do not know how the economy would have developed without a common European market. In addition, the most recent data about EU earnings are from 2008. Since only this relatively old investigation has been used, it is unclear these data are still up-to-date.

So, does the EU yield 1500 to 2000 euros to every Dutch citizen each year? If taken into consideration that the data that are used are from 2008, the statement made by D66 is mainly correct. However, we have to make too many reservations, which makes the statement uncheckable.

Uncheckable: „Only three people died in the construction of stadiums for the FIFA world cup in Qatar”
June 13, 2022