Blog: Why and How Russian Disinformation targets Europe and the EU in Georgia 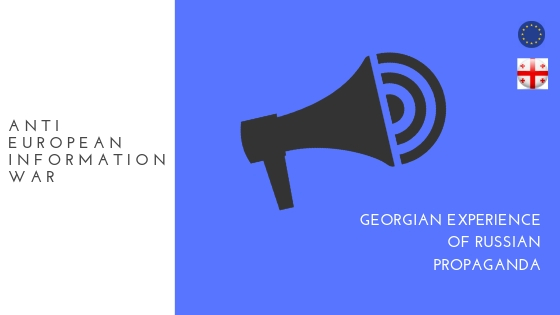 The Kremlin is engaged in hybrid warfare in order to strengthen its positions all over the world. To achieve its geopolitical goals, Russian authorities use a mix of different tools, including military, financial, economic, cultural and informational tools. During the last decade, the Kremlin has intensified the use of propaganda and disinformation as a weapon to influence public opinion against the West in post-Soviet countries, and to weaken institutions in the established Western democracies. Georgia is one of the main targets of Russian disinformation warfare because of its declared pro-Western orientation – the vast majority of Georgians support Georgia’s membership into the NATO and the EU, which the Kremlin strongly opposes.

Russian propaganda has several goals in Georgia, as identified by Georgian researchers and media monitors. They try to provoke anti-European and anti-Western ideas all around the country.  IDFI (2016) studied goals of Russian propaganda and detected several key factors. Propaganda is used to discredit Western institutions such as the EU and the NATO, with the purpose to change the public opinion against them. Russia tries to instill confusion, fear and hatred among the population by making up and spreading conspiracy theories, half-truths and fake news against Europe and the US.

Russian propaganda efforts are not new for Georgia or for the other post-Soviet countries, but the Kremlin stepped up its efforts by making social media networks the critical part of its campaigns. Russia has invested in additional personnel to influence the domestic online social media debate, developing a “troll army” to complement bots, or automated social media accounts (Giles, 2016, p. 30). These capabilities were then adapted and expanded to be used abroad.  Also Georgia mostly gets propaganda online and in social networks, in Georgian language.

Key myths about the EU and Europe

Media monitoring analysis in Georgia shows that one of the main targets of Russian disinformation is Europe/the EU, portrayed as a danger to Georgian identity, while Russia intends to represent itself as a saviour and the guardian of traditional values and the Orthodox Christianity in the region.

“Europe will deprive us of our nationality;” “Georgian men will be forced  to marry with each other;” “EU will take our religion and traditions away from us” – these are some of the common lies Russian propaganda is spreading in the country when referring to the EU-Georgia partnership and relations.

On the other hand, according to Georgian Media Development Foundation report on Anti-Western Propaganda, the role of Russia in defending the Orthodox Christian identity was emphasized as an alternative to the West. “The West was also accused of fighting against national identity, traditions and family. it was asserted that the Western values were unacceptable for Georgia.” (MDF, 2018, P. 14)

Yet another key myth has been that the EU will impose same sex marriages on Georgia through partnership. The purpose of such lies is to use homophobic sentiments among some of the groups of Georgian society against European countries.

Some of the myths are also related to the Association Agreement and visa liberalization. After Georgia received visa liberalization in 2017, certain anti-European political parties and public figures tried to portray the opportunity as as threat. “Perhaps Georgia will be wiped out,”  – some of them claimed.

Russia also intends to portray his market as the sole economic opportunity for Georgia to export its goods, and there have been conducted campaigns against Georgia’s Free Trade Agreement with the EU by them. Kremlin disinformation claimed that Georgian goods will never meet criteria for European markets, which is very far from reality as the EU markets are one of the main destination for Georgian goods nowadays.

Media Organizations – Propaganda in the media is carried out in several ways: through Russia’s own agencies and televisions, local media outlets and Russia-funded political and non-governmental organizations. Generally, propaganda is spread by Georgian-language working media, because Russian language is not dominant in Georgia.

Non-Governmental Organizations – Russian propaganda also relies on a newly established network of non-governmental organizations (NGOs). Studies found that these organizations are characterized by anti-Western rhetoric and the fact that their analytical papers and articles are based on Russian sources. As reported by the Georgian Public Registry, the founders and managers of various pro-Russian NGOs are often the same people. None of the pro-Russian NGOs disclose information about their funding on their websites. (IDFI, 2016, p.10).

Political Parties –  Representatives of anti-Western political parties in Georgia regularly reiterate and share the news from Russian disinformation channels. They often mention  European values ​​to be dangerous for the country, and a threat to Georgia’s identity.

1. Parties with openly pro-Russian agendas that visit Moscow and meet with Russian politicians.

2. Parties that officially distance themselves from the Russian political elite and declare themselves to be pro-Georgian, pro-neutrality .

Georgian Orthodox Church – The myth of incompatibility of Georgian traditions with Western culture is also distributed by the representatives of the Georgian Church. It is difficult to determine exactly how many of the church representatives spread these kind of messages, but the study shows that indirect or direct spread of Russian propaganda by them is a serious problem because representatives of church are highly trusted and influenced in Georgian society.(IDFI, 2016, p.12)

Violent Hate Groups – Apart from the Russian-funded NGOs, we meet unions and groups that actively organize various demonstrations with anti-Western messages – usually xenophobic, homophobic and against the freedom of expression. They are financed in various ways from Russia and spread anti-European narratives. Some of their actions are violent, usually against foreigners and against the representatives of the minority groups.

When analyzing key propaganda channels, it’s goals and messages, we can see the Kremlin intends to demonize the West and its institutions in the eyes of Georgians. Fortunately, support for the membership of the EU still remains high among Georgians. Public opinion polls show around 75% of Georgians (especially younger people) are for the European Union.