Blog: How to use our flowchart to check a statement about the Brexit Party in the EU Elections. 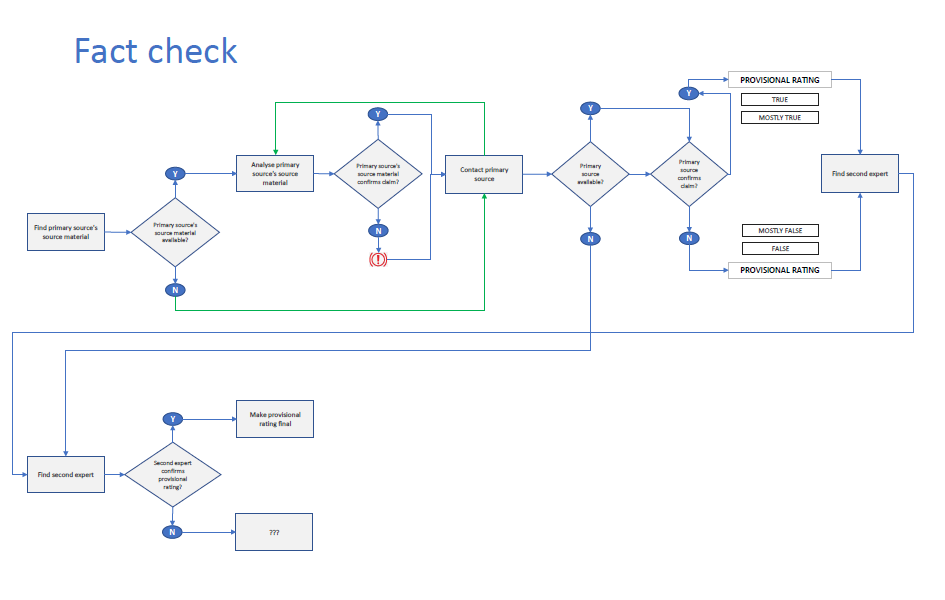 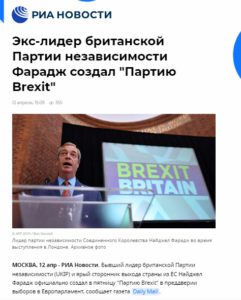 We have started fact-checking with the statement analysis. We see that this statement is a fact. So, we can continue. We defined the subject of the statement – these are elections in the EU Parliament – 2019. The next step is to expose what is specifically claimed. The news speaks about the launching by the British politician of a new party (Brexit Party), which will take part in the elections to the EU Parliament. This statement has factual nature and is not vague.

In this case, the base / source is not a survey (research) or official statistics (official stats), but a personal statement by Nigel Farage himself.

Analysis of the author / source

The analysis of the author / source – will allow working through and clarifying the source of the statement. The first step is clarification of the author of the statement. Judging by the information of «RIA NOVOSTI» the author is Nigel Farage. The author’s status is also understandable – this is a politician, a man from government circles (government). The next step is to define the source of a statement. In this case, it coincides with the author. On the other hand, the source may also be the first press conference of the Brexit Party, which was held on Friday, April 12, 2019 in London. This fact confirms by other Russian online publication «Land of the Soviets». Confirmation is also published in a very famous UK online newspaper «Daily Mail». And in this case, the source is British government.

Finally, it is necessary to understand the basis of the source. The official website of the Brexit Party does not make public any internal protocols of the party that consists the approvement of launching the party. The fact of launching a new party is confirmed by a special meeting organized by Nigel Farage and the accuracy of which is confirmed by official information on the official website of the party.

Also we managed to find the official Nigel Farage Twitter. All posts of politician that appeared after 11th of April confirm the fact that he launched a new British party to participate in the elections to the EU Parliament. 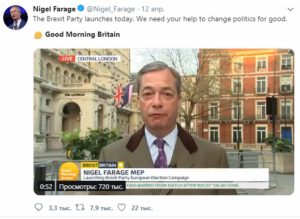 We can conclude, that several independent media and the politician himself confirms the fact of launching by Brexit Party to run in EU elections. So, we can consider it is true.