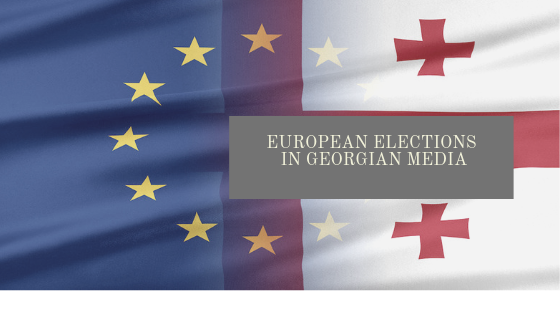 We monitored major TV stations and some online media outlets/social media pages (the ones which are identified as anti-Western media), from May 1 until May 26th. The national TV outlets mainly offered neutral coverage on the election days and during the pre-election period as well, which sometimes lacked depth and context for viewers. It’s also worth noting that stories about the election were mostly offered in the international news section, which is usually preceded by local news, both important and less important.

It is not unusual for Georgian TV stations to cover even important international news in the last section of their news and political programs, including the stories which have direct or indirect effect on Georgia. European Parliament election campaigns, political trends and results are among them. We think this needs to be changed in order to inform Georgian citizens on important political goings-on which may affect European political landscape and Georgia as well.

We’ve also monitored several anti-European media outlets in online and social media in between May 1 and May 26th. In Georgia, we meet many online publications which spread Russian narrative and disinformation against the West. There are also numerous troll pages, and pages associated with ultra-nationalist and fascist groups operating in the country which are aggressively anti-European.

When it comes to spreading Russian narrative, in some of the cases, Georgian anti-Western outlets shared news from Russian sources in Russian language trying to represent Russia as a trustworthy partner for Europe, unlike the USA, which the article intended to demonize. The same online media outlet also provided an article translated from a Russian source on how soon we will see the dissolution of the EU. Another anti-European online media outlet offered an article with the title “The EU is a cannibal man who wants to eat the sleeping beauty”.

We’ve also monitored several anti-Western and anti-European Facebook pages. One of them named “think” with thousands of followers and an active social media following claimed, that “uneducated youngsters tend to support LGBT propaganda”, and they also used homophobic slurs when referring to LGBTQ people. The page openly  supported Marine Le Pen and her party. This page also posted  a story  on the EU’s immigration policy, claiming that the EU embraces Muslim migrants (whom they represented as dangerous), while Christians don’t get the same treatment. We’ve also observed that some unreliable media outlets adopt names of the already-established and well-respected international media outlets. One of the examples is a website named “EURONEWS.GE”

Media monitoring conducted by us further convinced us that the purpose of anti-Western propaganda in Georgia is to portray the West/Europe as morally corrupt and wicked place. We’ve also observed that anti-western media outlets tried to represent the EU as chaotic institution with no future, while at the same time, described Russia as a reliable partner.

We think that If informed properly, Georgian audience will be less vulnerable in face of Russian anti-European propaganda and fake news. Fortunately, some of the media outlets inform the citizens on the benefits of Georgia’s close relations with the EU and NATO. They also cover European news properly. But, daily news coverage by most of the TV stations definitely lacks depth and context on international news, which we think should be taken into account by pro-Western media outlets in Georgia.