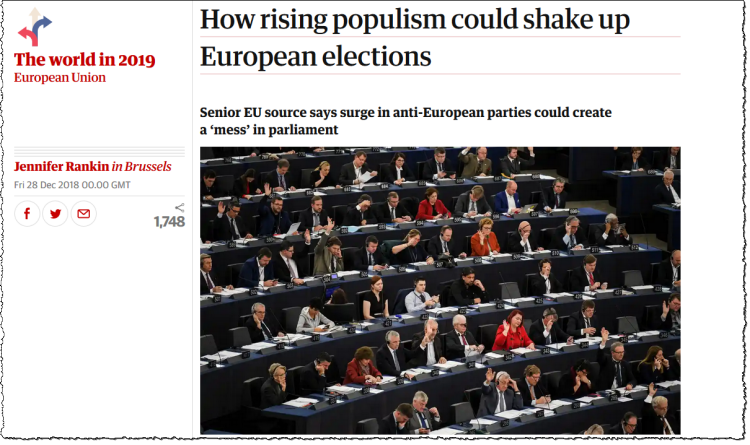 It is generally believed that «fake» is the product of new technologies but it can also be traced that the waves of «fake news» come with populism. The US elections vividly demonstrate this phenomenon.

In one of «The Guardian»`s recent articles «How rising populism could shake up European elections» it is stated that future elections may turn into a choice between EU and anti-EU, the dissemination of populism can lead to pluralism of European countries and cast doubt on EU existence. Some features of populism in particular solving the problem of immigrants are above reproach. But what will be waiting «strongly populistic» Europe?

Looking for the truth

At first glance it is hard to state that populism and «fake news» have much in common. However, some populist principles correlate with mechanisms of «fake news» creation. Firstly, attempts to adjust to people`s demands, fitting them too perfectly. Fake news provides people the information they want to consume and so does populistic propaganda. It shoots on few targets of the most burning problems, hyperbolizing and distorting them.

Secondly, during populistic campaigns they often speculate on the image of a simple person, one of the crowd who will be lead to a brighter future. With the social media development pretending to be this simple person or multiple simple persons becomes too easy. Of course, authorities’ involvement is one of many manipulative tools, but allegedly an ordinary man who gains no profit from posting «fakes» also can be a strong weapon.

Statements made on behalf of one simple man and a huge variety of manipulative tools created to make people believe often far-fetched facts populism and «fakes» fit into the global picture where facts are not so essential as their coverage.

«Fake news» is widely known as a tool for political opponents’ discreditation or to create the illusion of mass support but it can also pursue the other goal. Because of the splash of «fake news» during elections people can become strongly addicted to permanent disinformation. That provides a solid ground for destroying media pluralism, because unprofitable information can be declared as disinformation. These methods can be used to tighten the screws in order to prevent creating an open world system.