Analysis: “New Democracy will be the first party with an absolute majority of 40% in the European Elections in Greece according to European Parliament poll’

On 31/1/2019 an article published on more than 25 websites (some of those referred to another website as a source) stated that the European Parliament conducted a National Public Opinion that “records interesting trends of the electorate, considering the elections taking place in May”. In the articles is stated that the European Parliament conducted a public opinion poll that predicts an absolute majority win of the New Democracy Party over the other parties in the upcoming elections for the European Parliament in Greece. In the articles the words “survey” and “opinion poll” were used widely in contrast to the word “report”.

The majority of the news websites reported the news in the same way, without providing further information, regarding the survey and the following methodology. 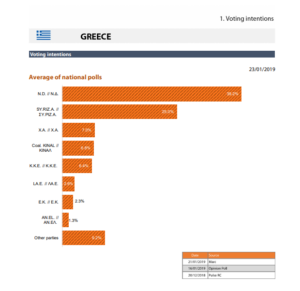 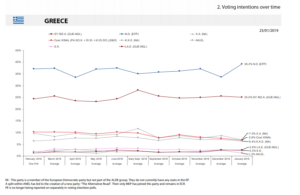 Diagrams 1 and 2: The graphs illustrate the voting intentions in Greece as presented in the European Parliament’s report

We also noticed diversification in the way the data were treated. In three articles the authors reported that the European Parliament conducted a survey with data provided by the national public opinion polls and they attacked the media outlets who tried to misinform the public.

Only one article, published on oikonomia.gr, provided objective information.

The report was prepared by Kantar Public for DG COMM’s Public Opinion Monitoring Unit and was uploaded on the European Parliament’s website. The data used in the report were assembled from opinion polls conducted in EU countries, regarding the voting intentions of the citizens. According to the report’s methodology, surveys on European election voting intention are preferable. However, when those data are not available, national voting intentions polls are used.

In regards to the Greek situation, three national opinion polls were used by Marc (published on 21/1/2019), Opinion Poll (published on 16/01/2019) and Pulse RC (published on 20/12/2018). Polls point out the vote intention if the national elections would be held promptly. The data indicate the final assessment of the election result by proportional distribution of undecided voters.

Lastly, it should emphasize that there is a problem in the report held by the European Parliament. The link to Marc’s poll was incorrect, it linked to an article reporting a poll conducted by the firm, but referred wrongly to the Prespes agreement instead. We managed to identify the correct article by cross-checking the date given in the survey concerning its publication. 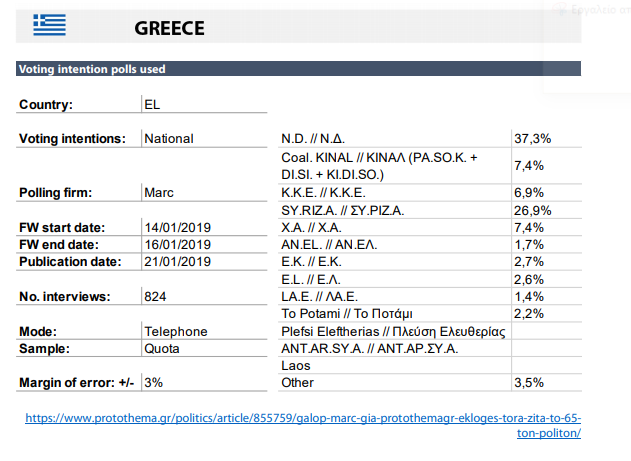 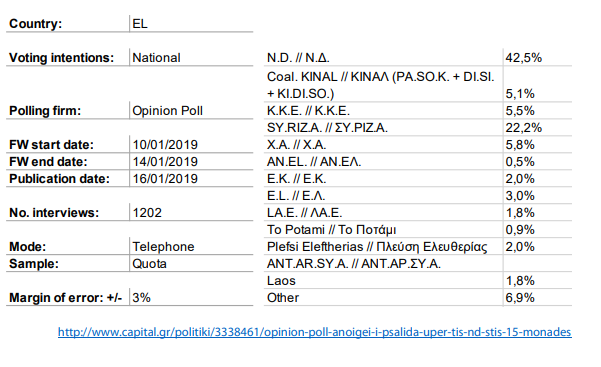 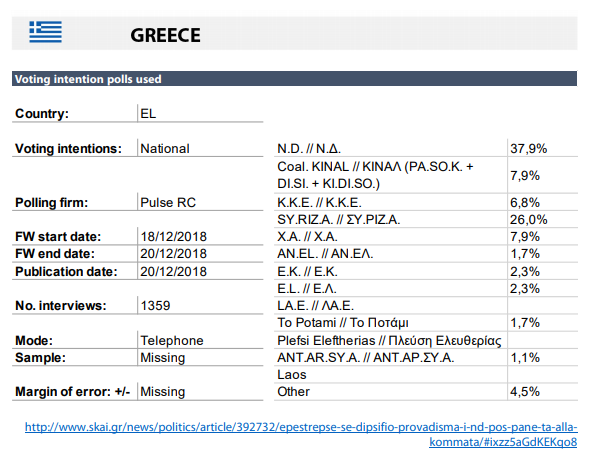 In short, in the article published on some websites is stated that the European Parliament conducted a public opinion poll that predicts an absolute majority win of New Democracy over the other parties in the upcoming Elections for the European Parliament in Greece. However the claim is not correct since European Parliament did not conduct a survey but a report about the trends of the electorate in Greece based on published national polls. Also, the information given, about the “survey” and the methodology followed is not clear. Lastly, there was a problem in the report held by the European Parliament. The link to Marc’s Poll (which was one of the three national opinions polls used) was incorrect, it linked to an article reporting a poll conducted by the firm, but referred wrongly to the Prespes agreement instead. Therefore, the article and its statements are mostly false.