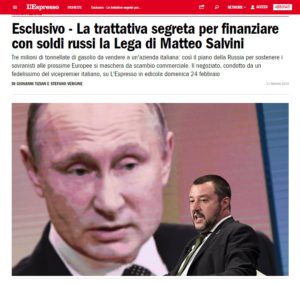 The number of attacks against migrants is increasing in Italy, reported russian «The Details» website, citing the Israeli «Walla». The report says that the increase in violence against migrants occurred after the right-wing party «North League» joined the government coalition. One of the party leaders – Matteo Salvini is the Minister of Internal Affairs.

Journalists of LʼEspresso magazine started an investigation of funding sources for the «North League» and found a «Russian trace». The article talks about a business deal occurred in October, 2018 between Matteo Salvini and the Russian authorities. “LʼEspresso” names «Rosneft» deputy prime minister Dmitry Kozak – as the main coordinator of the deal. It is also reported that earlier Matteo Salvini had already applied to the Russian Center of Science and Humanitarian Cooperation, which organizes cultural events – «Rossotrudnichestvo».

The article clarifies: «However, according to a political analyst and an expert on relations between Moscow and European political movements, “Rossotrudnichestvo”, represented in 25 countries, today is «the tool, used by Russia to implement soft influence on foreign countries». The budget of “Rossotrudnichestvo”, according to “L’Espresso”, in recent years has increased significantly: from 48 million euros in 2013 to 228 million planned for 2020. This is a sign of the increasing power of Russian interference in the elections taking place on the European continent».

The article has not gone unnoticed in Russia. “Rosneft”, whose deputy prime minister is Mr. Kozak, intends to sue “La Stampa” newspaper, that is also published information, based on  “LʼEspresso” magazine. “Rosneft” declares that all the information in the article “is false”, and demands “to immediately refute” it.

Leave your comments, thoughts and suggestions in the box below. Take note: your response is moderate